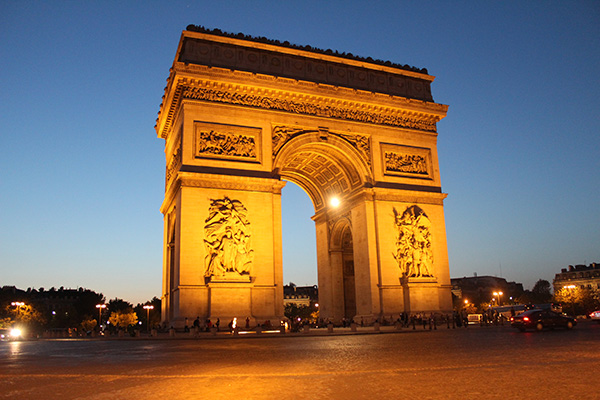 The arrival of President Jean Suis-Convaincu at the Elysée Palace in 2017 changed everything – but only briefly after Tea Party Republicans drove the world into a second financial crisis in 2016. His newly formed l’Exception Française – EF – party saw off opposition from the extremist Front National and united the French left and right behind the notion that the only hope for their country lay in being different. And emphatically French.

So, one of the first – and highly popular – actions of the freshly elected President was to revive a 2006 plan to create a French search engine to rival Google, Bling and Yahoo. Called Quaero, this was to be philosophically quite different from the American models. Search results would be driven by intellectual quality, judged by a panel of experts. Anyone looking up “Gladiator” for instance, would not be told about a trashy US film, but about George Dubois, the French Olympic fencer who attempted to revive the art of gladiatorial combat. There was legislation to strengthen the powers of the Académie Française against the use of Anglo-Saxon phrases. The word email for example had to be replaced in official documents by the approved courriel. Schoolchildren were banned from to describing the # twitter symbol as a hashtag and had instead to use the French term mot-diése. Twitter and Facebook were also subject to official sanction.They could only be mentioned on French airwaves when specifically relevant to a particular story.

Whoever came up with mot-diese as the official l’academie francaise word for hashtag is un vrai con. You can’t even properly hashtag it!

Because I know you’re all curious about the latest rulings from the Académie française, the hashtag will now be referred to as un mot-dièse.

A passionate gourmet himself, the president moved to protect traditional Gallic cuisine against competition from other cultures. French radio stations are already obliged to play a certain proportion of French-language music. Why shouldn’t the same rules apply to food and drink? Anglo-Saxon chains like McDonalds were welcome to remain on French soil, Suis-Convaincu said – through obviously gritted teeth – provided they amend their menus to accommodate more French fare. Such as the Boudin-Burger, for example, or le Big-Magret. There were to be limits on the number of Pizza or Chinese or North African restaurants that could operate in any town, and sandwiches would only now be tolerated in the form of ham-and-cheese baguettes. Coca Cola was to be dealt with through a “health tax” on sweet, fizzy drinks, similar to ones introduced by the US state of Colorado in 2012.

One day, the president took a call from the great French philosopher, Bernard-Henri Levy, who wanted to talk to him about wine. Our great Bordeaux and Burgundies, Levy intoned, are increasingly similar to the wines of the American barbarians. This trend must be stopped. Suis-Convaincu, whose favourite wines were Savennières, Château Chalon and Cahors listened with interest. “We don’t want smooth and ripe red Bordeaux; we want the leafiness our parents would have known and loved”, Levy said. “We need to get rid of the machines that exclude unripe and rotten grapes and return to the natural flavours of our soil”. All we need to do, he continued is to re-introduce strict tasting commissions that ban any atypical wines from bearing an appellation. Wines that failed the taste-test would be sold as Vins de France, he grudgingly said, though in an ideal world they would be destroyed.

Sensing that his words were falling on sympathetic ears, Levy went further. “Our wines cannot be properly appreciated in their youth – unlike the simple, savage examples from California and Australia.” Unfortunately, he said, the producers sell them too young. “But how could we do anything about that?” asked the President as he sipped a bone dry 1970 Vin Jaune. “Ah, that’s simple”, Levy continued. We use our Gallic passion for legislation. And after all, there’s nothing really new that we’d be doing. Spain and Italy have rules governing when their Riserva, Reserva and Gran Reserva can be sold. We’d merely introduce the same philosophy for our Grands Crus – and our other grands terroirs.”

But the Spanish and Italians don’t make their reserve wines every year, replied Suis-Convaincu who was a lot better informed about France’s neighbouring countries’ wines than most of his compatriots. “Pas de problème” said Levy. We’d be pragmatique, he said, despite the unpleasant flavour the Anglo Saxon-sounding concept left in his mouth. Our expert panels would lay down the rules for every region and vintage, much as the authorities currently decide when harvest can begin and the maximum yields.

“You wonder how will we enforce these rules? All we have to do is to intervene into the market. We’ll set up an Office du Vin which will buy the wine – at an agreed price – when it is released. We will then sell it when it is ready to be drunk – just as the owners of Chateau Latour decided to do in 2012.” Obviously, there would be huge short term cost implications, but these were manageable. A new luxury tax – on cars, handbags, shoes, perfume, jewelry, watches – and top wines – would bring in revenue. And then of course, the government would profit from the rise in the value of the wine it was ageing.

Despite initial fierce opposition from the négociants, some of whose businesses collapsed, the Office du Vin was set up and the new rules were introduced. A startling 36% of the 2017 harvest was deemed atypical and denied the appellation status it would have been accorded the previous year. As this was a “great” vintage, after much consultation and consideration, it was decided that top Bordeaux and Grands Crus Burgundies should follow the Spanish Gran Reserva model and be released five years after the harvest. Other premium wines were subject to a three-year delay.

British critics were largely delighted by the developments, especially those who had called for an end to the en primeur system and bemoaned the effect their more influential US counterparts had had on French wine styles. UK merchants were more conflicted in their views. Some, after all, had made a lot of money out of selling wine that was still in the barrel.

By the autumn of 2020, when the first village Burgundies and Crus Bourgeois were legally released, it was already clear that Levy’s plan was not turning out quite as he had hoped. Consumers – even in France – proved rather less keen on “typical” green-peppery flavour Bordeaux than the tasting commissions had been. Seeing their customers express a preference for ripe-tasting Languedoc reds, the cannier Bordelais simply switched to producing Vins de France, taking advantage of the relaxed rules that allowed them to give these wines a little of the sweetness the public seemed to enjoy.

Keeping the finer wine until it was mature proved little more popular. In 2020, Burgundy lovers in particular, complained at their frustration at having to wait a further two years for their Grands Crus and very soon, they too happily settled for Vin de France Pinot Noir with coded references to the Côte d’Or vineyards in which the grapes were grown. The inconvenient truth they all shared was that while tannic Bordeaux often needed a few years to soften, red Burgundy could be at its most delicious in its youth. People drinking it four or five years after the harvest might not get as much complexity, but this could be made up for by the deliciousness of the young, raspberryish and cherriysh fruit. Typical, mature French wine did have a following, but not a large one. In the years following the introduction of the Suis-Convaincu/Levy wine experiment, the proportion of French non wine-drinkers grew from 38% to nearly 42%. Perhaps unsurprisingly, the return to power in 2022 of Nicolas Sarkozy and his third wife Milady Gaga led to a relaxation of the new rules and widespread jubilation amongst the vineyards of La Belle France.

The facts. There’s a lot of this that I didn’t need to make up. Bernard-Henri Levy is a real French philosopher who helped persuade President Sarkozy to take military action against Libya, so launching new wine laws would be, well, small beer. French radio stations do have to play at least 40% French language songs. “Email” was banned from official use and schools aren’t allowed to refer to “hashtags”. The broadcast media were forbidden from inviting their audiences to follow them on Facebook and Twitter, and President Chirac did launch “Project Quaero” as a Gallic answer to Google. And in 1981, an Office du Vin similar to the one I described was part of the programme proposed by the incoming Mitterrand administration. Loony French government proposals under recent consideration include a ban on “speaking positively about wine in the media”. (Yes, Levy’s reference to a “Gallic passion for legislation” was not much of an invention).

When it comes to wine, consumers do seem to prefer ripe, off-dry reds to the “typical” Gallic style of yore, and in export markets in particular, ripe Languedoc-Roussillon Vins de Pays can often command higher prices than basic Bordeaux. It is also true that 38% of the French population no longer ever drinks wine; the figure for women is 50%. And yes, as someone who lived for six years in Burgundy, I’ll admit to a penchant for young Pinot Noir. In fact, some of the best Burgundy I’ve ever drunk came straight out of the barrel.