First things first. Before getting to the meat of my first contribution to Tim’s site, perhaps I should say a little about who I am and how I came to some of the – to some people, sometimes surprising and annoying views – I often hold. My journey to this column began in the 1970s in my parent’s hotel in Sussex where, at the age of 20, armed with a copy of Hugh Johnson’s then newly-published Wine and Alexis Lichine’s Wines of France I took over responsibility for the wine cellar. It was around the time when Britain joined the EU and fell under French AOC laws. Genuine grower-Burgundies competed for space in our cellar with jammy Blended-for-Britain negociant Beaujolais, Beaunes and Chateauneuf-du-Papes that were all drawn from the same vat. Listening to the nonsense pompously spouted by some of the pinstriped salesmen who were offering these last efforts offered an early introduction to at least one aspect of the UK wine trade.

In 1975 I moved to Beaune and began a five-year flirtation with penury, living among the vineyards and surviving by translating, teaching English and casual work for growers and local brokers. Those were the days when otherwise well-informed vignerons earnestly explained how, every Spring, the wines in their cellars started to fizz in sympathy to the rising sap in the vineyards (a romantic way of looking at the banal chemical process known as malolactic fermentation naturally set off by rising temperatures). Vincent Leflaive was already sophisticated enough to appreciate the threat from Californian Chardonnay (after a blind tasting to which I invited him) and to track the way Premiers and Grands Crus he sold to the UK were being profitably resold to the US by the importers. But he too was no stranger to superstition, banning women from his cellar out of fear that they might “turn” his wine.

Returning to the UK, in 1983, I became wine critic of the Sunday Telegraph and launched WINE International magazine at almost precisely the time that New World wines were starting to hit UK shores. So, everything I had learned about terroir from those Burgundians was overlaid by down-to-earth explanations of viticulture and winemaking from the Australians and Kiwis. It was the New Worlders who taught me the essentials of packaging, marketing and distribution – factors that had apparently rarely even been considered in Burgundy.

The following year brought the launch – with Charles Metcalfe – of the International Wine Challenge – IWC – (of which Tim and Charles are now co-chairmen). Blind tasting thousands of wines confirmed what I already knew: price and region are poor guarantors of quality and possibly even of style. Few who have been involved with many of these events can ever take concepts like Cru Bourgeois and St Emilion Grand Cru (not “Grand Cru Classé”) really seriously. Running IWCs in places like Japan, China, Russia, Poland and Vietnam opened my eyes to the way wine is viewed outside the UK.

This distancing from the Anglocentric views of some UK wine writers (though not Tim, I’d hasten to say) was increased by the fact that since 2006, I have, with two partners, been working with producers in Languedoc Roussillon to produce branded wines called Le Grand Noir and Greener Planet that now annually sell over 1.2m bottles. More than 90% of that wine sells outside Britain, with a majority going to the US and Asia. That, combined with my role as editor at large of Meininger’s Wine Business International and my research and consultancy efforts for a wide range of clients at DoILikeIt? Ltd, has also given me an insight into the dirty underside of the wine business. To put it bluntly, a decade ago, when I attended the press tastings hosted by British retailers and distributors, I could never have imagined the nature of the negociations that lay behind getting the bottles onto the shelves.

All of which brings me to the present day – and ideas and responses that reflect a mixture of innate contrarianism and scepticism and the accumulated experiences I’ve just listed.

Remember that lovely little seaside village no-one had ever heard of where you went on holiday a few years ago? Well, I’m sad to say that it was written up in a few newspapers and magazines and…

And that, in a nutshell ladies and gentlemen, is Joseph’s Law.

Sooner or later, increased popularity either leads to a descent into bastardisation or an ascent into stratospheric pricing. Or both.

Fifty years ago anybody who wanted could drive to Stonehenge and have a private spiritual moment hugging the ancient stones. Today, there’s a barrier that keeps the hordes of visitors 10 metres away. A decade or so ago, I was able to climb over the temples of Ankor Wat in Cambodia without anyone worrying about what I might do to the stones – or indeed to myself, given the risks of falling. I’ve not been back, but I’ll guess that today there are a lot more opportunities to buy gifts and postcards and fewer to get close up and personal with the carvings.

Just think about how this applies to wine. Not so very long ago, even in Spain, almost no-one had heard of Ribera del Duero. Then, Robert Parker delared that Pesquera was Spain’s answer to Petrus and prices of the top wines shot through the roof. More recently came the bastardisation: now you can buy bottles of Ribera del Duero for €3 in almost any Spanish supermarket.

Sadly, I believe that, over the long term, Joseph’s Law is as inevitable as gravity. Regretting that Prosecco is no longer the noble product it once was, as Alfonso Cevola does in this post, or lamenting the fact that normal wine lovers can no longer afford to drink Ducru Beaucaillou, as Chris Kissack does here, is rather like arguing with Newton.

The challenge lies in not only keeping one step ahead of the effects of Joseph’s Law – the equivalent of catching the egg before it hits the ground – but in exploiting that timing.

Some of the most cunning examples I’ve seen of this kind of exploitation are US retailers that offer their customers “pre-cult” wines. I remember asking how one of these companies could be so sure that the wines they were selling would gain cult status. The look I received was pitying. “We just say it’s a pre-cult wine and our customers do the rest…” 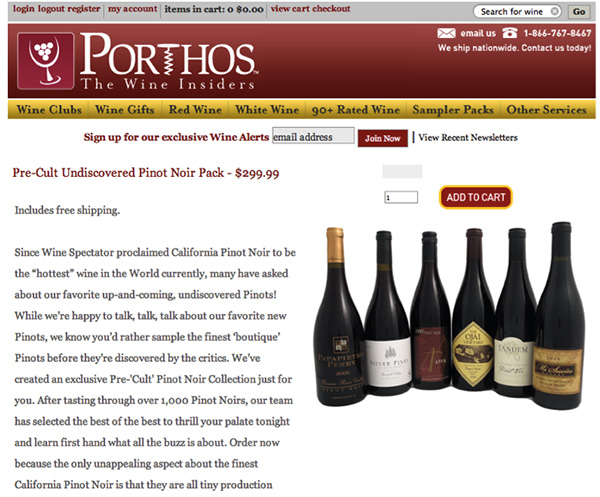 Of course, in the UK, we tend to laugh at the very idea of “cult wines” so most British wine merchants probably have little chance of adopting this strategy, but quite frankly, I can’t see what’s wrong with the idea of buying something before its price rises. And over the last few weeks I’ve been tasting a few fine examples of wines that are undeniably “pre-cult”. Some of the top 2011 Burgundies are already out of mortal reach, but given the growing market for this region and the limited supply, I’d certainly place some very safe bets on lesser villages and less well-known growers. As for bastardisation, I’d be looking at Italian whites such as Gavi and Fiano which are in line to serve as follow-ups to Pinot Grigio. Only time will tell.