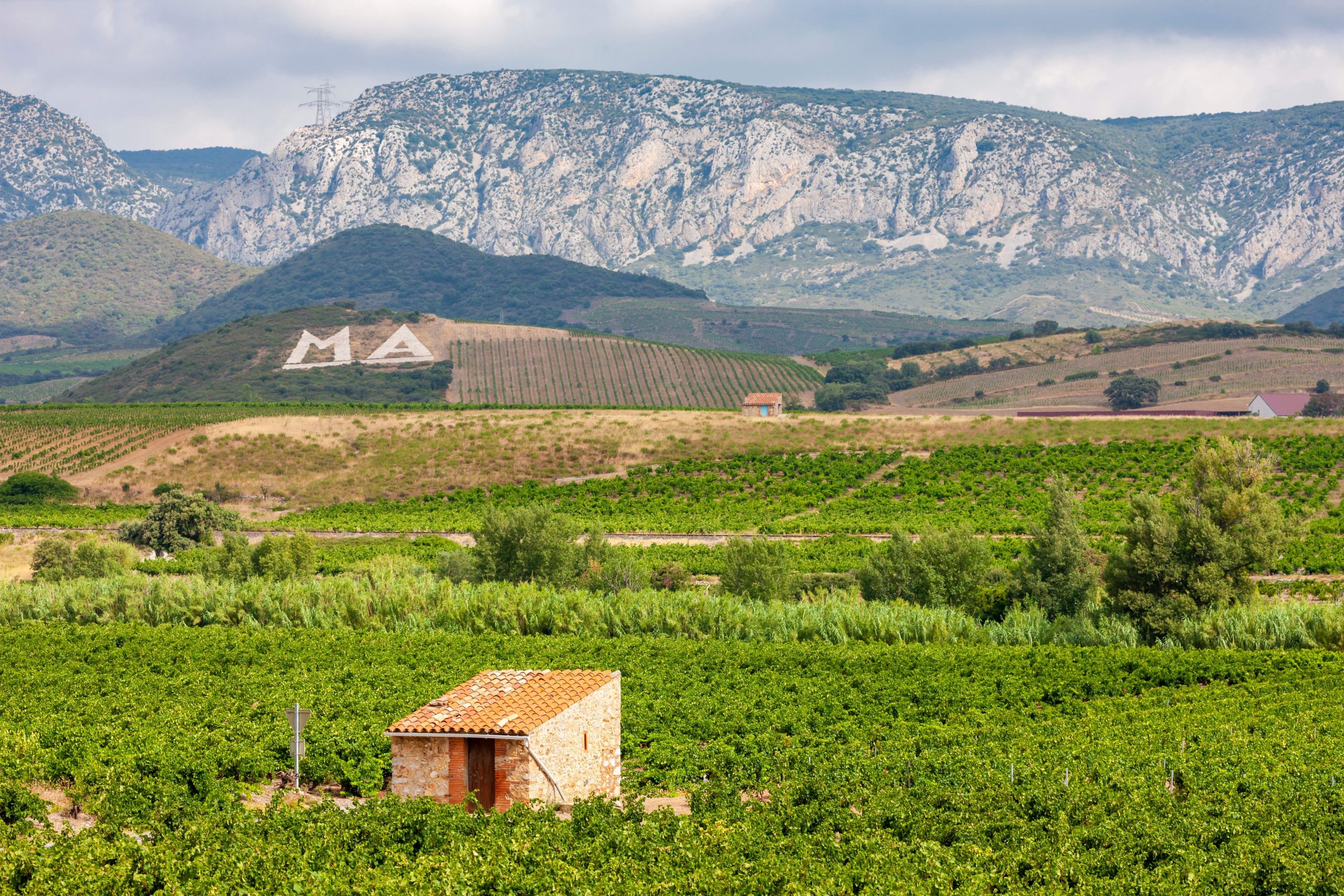 Château de Jonquières is located just to the north of Montpellier, its slate turrets and honey stone quietly distinguished, history writ large in its cobbles and flagstones. An ancient archway has been preserved on the lawn, trees behind that and beyond that the vines. No ersatz sculptures on display here, nothing to betray conspicuous affluence or the need to display such a thing. We are here to taste the wines of sixty growers from the Terrasses du Larzac, one of the most lauded enclaves within the Languedoc canon, and one with which, cognoscenti aside, very few people are familiar. This seems strange, judging by the quality of the wines.

This lack of familiarity may be attributed to many factors, but key amongst them must be a political backdrop, the labyrinthine complexity of which provides a stark contrast to the Château itself and the quietly dignified landscape. The Languedoc is far from France’s seat of vinous power, its influence weighed down by expediency, over-cropping and the over-weaning demands of an indulgent co-operative movement. An arcadian landscape of protest and pétanque, with the riots of 1907 echoing down the years to the tune of civil disobedience in the face of lowering per capita consumption, cheap imports and a temperamental disposition to challenge an ever more precarious status quo. Not a bad idea in one sense, as there has been little to celebrate when such a beautiful place has been turned into a vast open-air factory, and a rusty one at that.

So, what went wrong? Did anything go wrong? The Languedoc and Roussillon combined cover half the surface area of a century ago, yet still contribute 5% of the world’s wine, more than Australia, more than Chile and more than South Africa. There’s still a lot of wine to sell , and the ongoing tension  is between those who farm the plentiful alluvial plains which run from Narbonne to Montpellier and those who toil on the uplands, on a scenic balcony of hills beneath the Cevennes which include the Causses and the Montagne Noir. Plenty of styles and plenty of different soils…but little by way of a specific identity. Here there is no monastic heritage to cleave a qualitative template, hence, by way of corollary, the impulse, naturally enough, has been towards volume of production.

All efforts to redress the balance have met with bureaucratic obfuscation and confusion. The diaspora which can be partially summarised, albeit simplistically, as that between the co-operative movement and the de facto négociant sector is only partially mirrored by the split between the AOC/AOP movement (11% of production) and the category known as IGP (the rest). The IGP is a powerful beast indeed, dominated by the over-arching Pays D’Oc, covering in total over 120,000 hectares, and producing an equivalent of over 800 million bottles per annum, over 85% of which is sold in bulk. The philosophy here is inclusive and broad-brushed, with now 57 varietals permitted, à la Heinz Baked Beans, some of their number (Albariño and Sangiovese for example) which do not immediately make one think of the south of France. An almost buccaneering expediency and engaging self-belief come into play here…did not Mas de Daumas Gassac, after all, take on all comers with their faith in the Cabernet Sauvignon in the Aniane Valley? Everything is possible in one sense, but the price exacted may be high and a spirit of authenticity may be lost.

Where does this leave the 11% of the Appellations Contrôlées/ Protegées and our friends from the Terrasses du Larzac? It leaves them in a tight spot, that’s where; theirs is an expensive product, farmed and made under quite rigorous stipulation on yields and so forth, but with a battle royale on their hands to achieve recognition and to build a reputation. The problem,  it seems to me, is that there is almost too much of a good thing; Les  Terrasses du Larzac is but one of many many enclaves with huge potential; one only has to think of Boutenac in Corbières, or Montpeyroux nearby, or even Minervois la Livinière…the latter a very interesting example, now into its second decade as a Cru within a Cru, and still struggling to build a reputation.

The CIVL have attempted to address the issue by declaiming a new qualitative template, subdivided into three categories of a putative pyramid of quality. At the bottom there is the catch-all ( including Roussillon) AOC Languedoc…..so far so good, but then we stray into two categories where the language itself is an issue; the second tier is made up of the ‘Grands Vins du Languedoc’ and the top flight are simply the ‘Crus du Languedoc’. Having taken far too long to appreciate that Grand Cru Burgundy was superior to Premier Cru Burgundy, I have to say that this is less than entirely clear. What is more, and inevitable up to a point, is that the criteria for selection are sometimes hard to understand, let alone to justify. The selection criteria are destined to court controversy; if one agrees, in principle, on the identity of the Crus ( Corbières Boutenac, La Clape, Minervois la Livinière, Pic Saint Loup and Les Terrasses du Larzac) there is plenty of room for debate thereafter ; why, for example, is Saint Chinian Berlou not similarly elevated, or Montpeyroux, and, while we are at it, what is the exact significance of the Dénomination Régional sub-category into which these last two examples fall. And so on and so on. Politics dear, boy , politics…no wonder the Grange des Pères, recently fetching record auction prices, decided to bypass this flawed process altogether.

But not everyone can be the Grange des Pères, for all the potential out there. In terms of the Terrasses, many of the excellent producers gathered at Château de Jonquières have achieved a degree of recognition in France…. Mas Jullien, Montcalmes  and  Mas Cal Demoura come to mind, but there are many others still yet to forge a significant reputation locally , let alone internationally; here I am thinking of , La Pèira en Damaisela and Mas des Brousses, not forgetting the appropriately named Les Vignes Oubliées and several others….. The best examples juxtapose a real sense of place (scrubland, herbs and the garrigue) with the evident virtues of careful but unobtrusive winemaking. They are often exceptionally good.

Something of a conundrum then, but surely not an insurmountable one, especially when such good wines are being made across the piece; one only has to think of the Mont Tauch Cave Coopérative, or the Val D’Orbieu négociant to realise that that quality has improved dramatically on every level. If the environment is good, as it surely is, and the will is there, demonstrable beyond peradventure, then there must be a way to introduce a simpler taxonomy. By proposing further reform, even when brandishing Occam’s razor, maybe one is merely making things even more complicated. Herein lies the dilemma, which is in itself enough to provoke yet more embarrassment …..