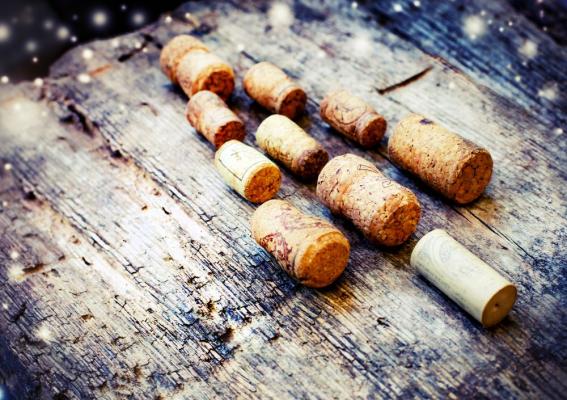 December has barely begun, but if you’re anything like me 2016 has made you somewhat disinclined to feel much in the way of goodwill to all men, and you’re probably well over Slade singing ‘So here it is, Merry Christmas’ at you every time you step into a public space. Nevertheless, Noel is approaching with all the immediacy of an oncoming juggernaut and it won’t be long before friends, family and all those people you’ve been trying to avoid all year turn up on your doorstep, expecting food and presents. The only viable response is to start stocking up on the wine you’re going to need to get you through the festive season.

By coincidence, I reckon that there are a dozen styles of wine you should invest in to tide you over the 12 days of Christmas. Each fulfils at least one particular need, while most are versatile enough to bring something to a wide range of parties.

We’ve become conditioned to believe that nothing says celebration like Champagne. Although the grand marques offer huge discounts at this time of year, you’ll almost certainly get more pop for your pound with a bottle of grower’s champagne. I’m prepared to go even further and suggest that Blanc de Blancs is the way to go at Christmas – there’s something about the zippy, zesty quality of an all-Chardonnay fizz that sets your palate up nicely for the meal to come. Both the bright-fruited, tangy Pierre Peters Cuvée de Reserve Brut NV (£32, The Wine Society) and the taut, focused Larmandier-Bernier Latitude Extra Brut NV (£37.50, Lea & Sandeman) make great aperitif wines. Should you happen to be handing round nibbles at the same time, the creaminess of the Pierre Peters suits blinis topped with a dollop of equally creamy crème fraîche and some salmon caviar (or even real caviar, if you’re pulling all the stops out), while the minerality of the Larmandier-Bernier finds an echo in the salinity of oysters.

Don’t waste the good stuff on great-auntie Gladys, who wouldn’t appreciate a prestige cuvée if it was presented to her in a Lalique crystal flute – and you certainly shouldn’t splurge on top-drawer bubbles for that banging New Year’s bash. And forget Prosecco: it’s ubiquitous and it’ll make you look cheap. This year, the well-informed wine lover should invest in Crémant for all large gatherings. Chenin Blanc from the Loire lends itself well to making bright, crisp apple-scented fizz, as you’ll discover should you opt for either Langlois’ pert, zesty l’Extra Brut Crémant de Loire NV (£12.99, Majestic) or the refined Domaine des Hauts Perrays Brut Crémant de Loire NV (£13.95, Lea & Sandeman).

The other classic appetite-whetter and all-round friend of pre-prandial canapés is, of course, Sherry, particularly the lighter Fino and Manzanilla styles. Although these wines can take on nuts, green olives and other salty nibbles, I rather fancy the idea of a glass of Equipo Navazos’ limpid, creamy Fino En Rama (£9.99-10.50/37.5cl, Cambridge Wine Merchants, The Solent Cellar) with either oysters (the wine brings out that tangy marine quality) or some gently smoked salmon. A more peaty, smoky cure to the salmon calls for a more intense Fino, such as González Byass’s Fino Dos Palmas (£16.50/50cl, The Wine Society), a wine that would also do justice to a plate of finely sliced pata negra ham thanks to its Amontillado-like nuttiness.

If you’re planning a deeper dive into all things fishy – perhaps an Italian-style Feast of the Seven Fishes on Christmas Eve or a shellfish platter for New Year’s Eve – your best move would be a maritime white. Many coastal appellations produce sparky white wines with a saline twang to them, and these tend to work well with all kinds seafood. Over the course of the past year’s tastings, many of the seaside wines I’ve enjoyed most have come from Spain. Traditionalists should enjoy Pazo Senorans’ lively Rias Baixas Albariño 2015 (£14.50-16.95, Wine Direct, Hennings Wine, Handford), while those in search of something more unusual will be impressed with Celler Pardas’ Rupestris 2015 from Penedès (£13.32, Bottle Apostle) – just think of it kind of Picpoul de Pinet on steroids, with more fruit and mid-palate weight than you’d expect from the French wine. Even if you’re not all that into your seafood, it’s worth bearing in mind that these crisp whites will also work well with all kinds of Christmas leftovers, from a creamy turkey pie to cold slices of gammon (especially if served with a crisp green salad).

You could make a similar case for volcanic whites, only instead of conjuring up a salty maritime breeze, these wines have a smoky, (pleasantly) reductive quality as well as brisk acidity. This makes wines like Contrada da Arcuria’s Graci, Etna Bianco 2013 (£29.50, Berry Bros & Rudd) and Szent Tamas’s Mad Dry Furmint, Tokaji 2015 (£13.90, Cambridge Wine Merchants, Talking Wines) particularly adept at matching smoked fish dishes. Try one of these wines with a brunch of smoked salmon and scrambled eggs or kedgeree for a real wake-up call to your palate.

I get the impression that the Anything But Chardonnay club has been quietly disbanded at some point over the past couple of years, and a good thing too. Unless your festivities are firmly focused on red meat, Chardonnay should cope with pretty much anything you throw at it, from turkey and gammon to seafood and leftovers (Chardonnay with bubble and squeak – well worth a try, trust me on this). The knack lies in picking your Chardonnay. I reckon you need one with a bit of New World fruit, but not so much that it’s over-ripe and blowsy; oak is good, too, but once again, a little goes a long way. Try Mahi’s crisp, creamy Twin Valleys Chardonnay, Marlborough 2014 (£20, Bottle Apostle) or the layered, complex Greywacke Chardonnay 2013, also from Marlborough (£32.99, The Secret Cellar, Reserve Wines).

If you’re planning on tucking into a roast goose (or duck) on Christmas Day, your go-to white should be made from Riesling, preferably one with some sweetness. Before you dismiss the notion as evidence of madness, remember that the acidity of the wine will scythe its way through the bird’s fattiness while sugar will lend it the weight and richness it needs to stand up to the dark meat. Dip your toe in the sweet wine waters with Dönnhoff’s delicious Kreuznacher Krötenpfuhl Kabinett, Nahe 2014 (£19, Clarion Wines, Huntsbridge Wines, Loki Wines) or go for the full immersion of Rolly-Gassmann’s intense Riesling de Rohrschwihr, Alsace 2010 (£41.95, Berry Bros & Rudd, shop only). The latter is a late-harvest style, but the acidity is so bright that the wine tastes medium dry rather than truly sweet. The Riesling bonus you get with both these wines comes with Christmas leftovers – think turkey curry or goose salad with a spicy Szechuanese sauce. Bonus number two is that nothing picks up a jaded palate quite as well as a glass of off-dry Riesling.

It goes almost without saying that the most versatile Christmas wine of all would probably be made from Pinot Noir, a grape whose viticultural fickleness is only matched by its easy-going ability to pair with most kinds of food. My advice is to turn to the New World, as the extra weight of fruit will help the wine cope with the traditional festive trimmings – sharp cranberry sauce, potatoes roasted in duck fat and chestnut-spiked sprouts. The juicy berry and cherry fruit in Lompoc Wine Company’s Santa Rita Hills Pinot Noir 2014 (£29, Roberson) should handle your turkey with aplomb but the wine is still light enough to work with a glazed ham or a whole roast salmon. It’s also an absolute steal at the price. If you’re after something with a bit more weight and complexity, William Downie’s precise, poised Yarra Valley Pinot Noir 2015 (£42.10, Lay & Wheeler, Oz Wines) might be the ticket. Decant the wine a couple of hours ahead of time and the resulting wine, while still fine with turkey, will have the body to take on roast beef, goose or game as well.

If you’re after something weightier for your wing rib of beef or your goose, give due consideration to a Sangiovese. A top-notch Chianti Classico, such as Fontodi’s 2013 (£18-23, AG Wines, The Wine Reserve, Philglas & Swiggot) has the body and the savoury depth of fruit to take on these rich meats with ease, as well as enough bright acidity to handle that goose grease. Alternatively, you could step things up a gear and pair either main course with one of the more perfumed and delicate Brunello di Montalcinos, such as Sesti’s elegant, layered 2008 (£42.99-52, Adnams, Bottle Apostle).

Another flexible festive friend can be found in Beaujolais, particularly among crus such as Fleurie, Brouilly, Côte de Brouilly and Régnié. The best wines from these zones have both body and concentration, as well as freshness and perfume. Add modest alcohol levels into the mix and you have a wine that plays well with a wide range of flavours and textures, from fish to poultry and – with a bit of bottle age – game. To my mind, though, Gamay really comes into its own when you’re looking for a partner for glazed hams, charcuterie and, yes, leftovers – or am I the only person who cooks way too much on Christmas day and then has to find innovative ways of making the remainders palatable? Either way, Château Thivin’s Les 7 Vignes, a 2014 Côte de Brouilly (£16-19, Theatre of Wine, Selfridges, The Secret Cellar) and Julien Sunier’s Fleurie 2014 (Reduced from £20 to £15.99 until 7 January, Roberson) will both rise to a plethora of culinary challenges with grace and poise.

Wine snobs will sneer at my next suggestion, but I reckon you can’t have a Christmas week without drinking at least one mug of mulled wine somewhere along the way. If nothing else, you need something warming to reward yourself for hoisting yourself off the couch and going for a brisk walk in the cold to work off all those extra calories. You don’t need to use anything fancy to make a good mulled wine – something robust and red, with little or no oak, is all you need. Domaine Laborie IGP Pays d’Oc 2015 (£5,75, The Wine Society), a chunky, herb-strewn Southern Rhône blend from the Languedoc, or the peppery, dark-fruited Bodegas Monfil’s Garnacha, Cariñena 2015 (£7.95, Lea & Sandeman) should do the trick nicely.

My favourite mulled wine recipe starts by pouring half a bottle of the wine into a saucepan, along with peel strips from one lemon and one orange. Heat gently and stir in 150g caster sugar until it dissolves. Tip in 4-5 cloves, 2 bruised cardamom pods and a stick of cinnamon, bring to the boil and cook for a few minutes until slightly reduced. Add the remaining half a bottle, plus another bottle, and gently heat through, making sure that the mull doesn’t boil vigorously. Serves 10-12.

My final recommendation is to avoid Port this Christmas and opt, instead, for a Rutherglen Muscat. These rich, fortified Muscats, a speciality from the northern fringes of Victoria, Australia, can do pretty much anything Port can do – and then some – albeit with slightly less alcohol and a lot more sugar. Salty blue cheese? Check. In fact, make that pretty much the whole cheeseboard, from hard Cheddar or Comté-style cheeses to salty blues and pungent washed-rind numbers. The secret is the mystical marriage of salty cheese and sweet wine. Rutherglen Muscat’s dried fruit characters create marvellous mouth music with the Christmas pud, of course, and that makes them terrific partners for dried fruit cake, stöllen and mince pies too. Or just sit and sip a glass of Stanton & Killeen’s luscious Rutherglen Muscat (£13.75-13.99/37.5cl, Oddbins, Huntsbridge Wines, Adnams) while you’re relaxing in front of the TV and picking your way through a box of chocolates or Deglet Nour dates. If you want to step up the intensity and concentration, go for Campbell’s Rutherglen Class Muscat NV (£22-23.50/37.5cl, Fortnum & Mason, Australian Wines Online, Bottle Apostle).

Note: All prices quoted are for single bottles, case discounts may be available.