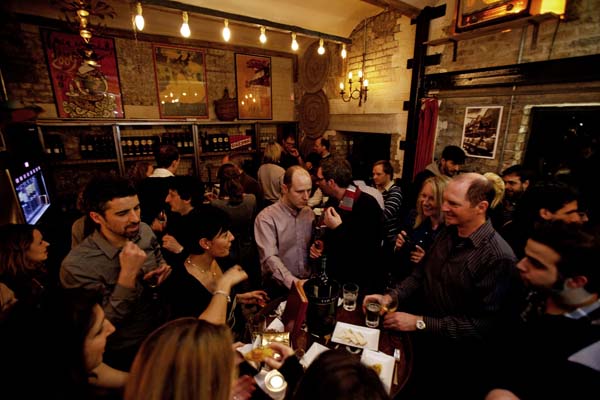 Fashion, so the experts say, is cyclical. Wear your flared jeans or Annie Hall waistcoat long enough and you’ll eventually look like you’re in with the in crowd. (Don’t hold your breath, though, for a revival of puffball skirts or kipper ties any time soon.)

What’s true of clothing applies equally to wine – even though we’re all still waiting for the great Riesling revival. One wine that’s spent more than its fair share of years in the wilderness but is currently acquiring a veneer of cool is sherry. Due praise, then, to the sherry bars that have sprung up in recent years, helping to spark interest in southern Spain’s finest.

Arguably the best of these bars – if you judge these things on the breadth of the wine list – is Capote y Toros (157 Old Brompton Road, SW5 0LJ). The list features eight pages of sherries – around 100 bins in all. It includes some rare bottlings, such as Emilio Hidalgo’s El Tresillo 1874, an aged amontillado, and Equipos Navazos’ sought-after Palo Cortado La Bota No34. There’s an excellent range of sherries by the 75ml glass – more than 50 all up, ranging from finos and manzanillas to viscous PXs – as well as a variety of different bottle formats. The food menu’s not bad, either, with plenty of tapas bar staples, as well as a few unusual dishes, such as pork cheeks cooked in sweet oloroso or razor clam ceviche.

While the atmosphere at Capote y Toros can occasionally seem a bit subdued, there’s always something of a party vibe at José (104 Bermondsey Street, SE1 3UB). The buzz could have something to do with the fact that the place is tiny – a few bar stools face the open kitchen and windows, and there’s a six-seater table in the middle of the room – so even quiet conversations add to the noise levels. But this is a fun place to be – I like to drop in for a quick drink after work or an evening out with a group of mates. The food’s good and there’s a decent list of around a dozen sherries, all of which are available by the glass. Finos and manzanillas are well represented, and there are a couple of examples each of the more oxidative styles, plus a dense, treacly PX.

Another venue with plenty of bustle is Bar Pepito (3 Varnishers Yard, N1 9FD), another space so minuscule that punters spill out into the courtyard on busy evenings. The sherry list here is brief and to the point, with the wines of Gonzalez Byass dominating a line up of around 20 sherries, both dry and sweet. All are available by the glass, but anyone wanting to explore a particular sherry style in depth would be well advised to opt for one of the six flights. These each feature three 50ml measures, along with a tapa to match. The flights are all interesting, but if you’re into your aged sherries, the Treinta Años (a selection of wines from older soleras) is a don’t-miss proposition.

The USP at the recently launched Drakes Tabanco (3 Windmill Street, W1T 2HY) is that most of its sherries are served straight from the barrel. Because these sherries come from one bodega – Fernando de Castilla – the range of styles is relatively limited. But what Tabanco lacks in variety, it makes up for in atmosphere – there’s something about the dark wood fittings and terracotta tiles here that transports me straight to Andalucia’s cobbled streets. If you just fancy a copita, you can stand by the bar and watch it being drawn off from the barrel with a venencia. If you’re hungry, book a table and tuck into a range of dishes from a slightly weird hybrid Brittano-Hispanic menu. There’s even a six-course food and wine pairing menu for £55, a steal if you’re yearning to find out just how well amontillado copes with egg yolk, leeks and romesco, or whether fino can take on pickled cockles with soda bread and seaweed butter.

Tabanco has a couple of older siblings, Copita (27 d’Arblay Street, W1F 8EP) and Barrica (62 Goodge Street, W1T 4NE). As their names suggest, sherry provides both places with a raison d’être. Each has around 15 fortified wines on the list, available in 75ml or 100ml glasses or by the 375ml carafe. Although the core of each list is the same, there are slight differences. Barrica’s list has a slight edge, as far as I’m concerned, largely because it gives you a steer about which dishes match best with the wines. The food in both places can best be described as providing a contemporary take on traditional classics.

Honourable mention should go to Morito (32 Exmouth Market, EC1R 4QE). Although it doesn’t seem to be on the sherry buffs’ radar, its list offers a pretty good range of fortifieds by the glass (small and medium sized) and by the bottle. This narrow space seems to have little truck with any of the conventional Hispanic semiotics – there are no hanging jamons or dark wood here, just brightly coloured, minimalist modernity. The food (like that of neighbouring Moro) has a Spanish focus, albeit with the odd hint of North Africa and the Middle East.

Inevitably, the sherry pickings are somewhat slimmer if you head out of London. Weirdly enough, though, South Wales turns out to be a hotbed of sherry action, thanks to the Bar44 group, which has two permanent sites (one in Cowbridge, the other in Penarth), as well as a pop-up street kitchen housed in a silver airstream trailer. Ten sherries form the core of the list, but a rotating selection of weekly specials helps to liven things up. Real aficionados (or anyone looking for a fun night out) will want to book in for one of the bar’s sherry sessions. Forty quid per head gets you (and up to nine of your nearest and dearest) an evening’s worth of guided tasting led by sherry educator (and co-owner of the bar) Owen Morgan. Your money not only pays for two hours of tuition, you also get six courses’ worth of generous food pairings too.

Moving northwards, the Ambiente group also has two sites, one in York and another in Leeds. There are some 30+ sherry bins on the list, covering the full range of styles – including (sherry snobs, please look away here) cream sherries (although not as your granny knew them – these are sweetened olorosos). Sherry flights are also part of the shtick – as well as half a dozen organised by style, there’s an introductory flight, one that takes your tastebuds on a trip round the sherry triangle, and another focused on VORS sherries. If your tastebuds are so inclined, sherry cocktails are also on the list.

Also worthy of mention are three restaurants with strong sherry lists, two of which have strong links with the sherry bars listed above. Pizarro (194 Bermondsey Street, SE1 3TQ) and Moro (34-36 Exmouth Market, EC1R 4QE) are the more formal full-fledged restaurant incarnations of their sherry bar siblings. Over in Fitzrovia, Fino (33 Charlotte Street, W1T 1RR) also majors on sherry (in addition to a superbly curated list of Spanish wines), listing 22 bins, most of which are available by the glass.

So far, though, the great sherry revival is still pretty (Iberian) ghetto fabulous. With the exception of the brilliantly diverse list at Hakkasan (8 Hanway Place, W1T 1HD), which features seven sherries (four by the glass), you’re about as likely to find a great sherry selection in a non-Iberian restaurant as you are to find yourself drawn to the idea of festooning your shoulder-padded jacket with a chain of safety pins.