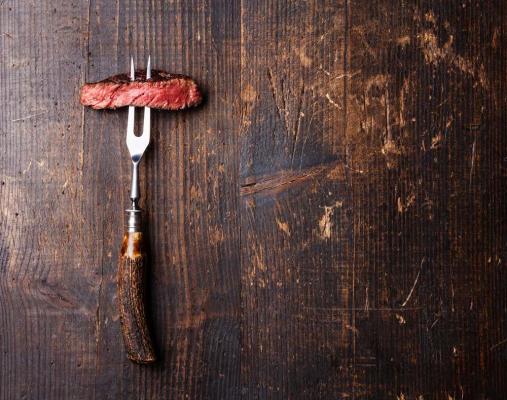 The wine trade loves a good shibboleth. Sauternes is the best match for foie gras, for instance. (Wrong, unless you’re into having your palate clagged up by an unctuous sweet wine that doesn’t have enough acidity to cleanse your palate after a mouthful of equally mouth-coating fatty liver). Another is that Gewurztraminer is an ideal wine for a curry evening. (Wrong again – another case of embarass de richesses, in which heady, alcohol-rich wine competes for attention with the powerful spicing of the dish.)

And then there’s the idea that rare meat works best when paired with young, tannic wines while older wines are more suited to well-done meat. This wasn’t a notion that I could dismiss quite as easily as the ones cited above and so, in the interest of wine science, I decided to put the claim to the test.

That was my excuse for sitting down at my dining table last week with nearly two kilos of steak and six bottles of wine in front of me. Those of you concerned about my cholesterol levels (not to mention my alcohol intake) will be glad to know that I wasn’t alone. Wine list consultant and former restaurateur Martin Lam and Blandford Comptoir’s head sommelier Jorge Reus had turned out to help me, as had my fellow MW, Richard Bampfield.

Richard came bearing gifts: the wines lined up in front of us were mostly made by his clients. Two came from Château Brown in Pessac-Léognan, a 2010 and a 2004; another pair were from the Bichot stable – the Domaine des Rochegrès Moulin-à-Vent 2014 and the Domaine du Pavillon, Clos des Maréchaudes, Aloxe-Corton 1er Cru 2009. Flying the flag for the New World were Grangehurst’s Shiraz-Cabernet, Stellenbosch 2005 and Doña Paula’s Valle de Uco Malbec 2015.

After we’d had a chance to make some brief notes on the wines, the first dish to the table was a freshly prepared steak tartare. Rather than making the panel chew through unseasoned chunks of steak purely for the purpose of evaluating the effect of tannins on the protein, I’d decided to make this more of a real-life challenge. I’d seasoned the chopped meat with the usual accompaniments, including a generous dash of tabasco and a sprinkling of tarragon and parsley.

The consensus round the table was that although the texture and tannins of the young Bordeaux helped cut through the raw steak, the flavours of the wine fought with those of the dish, resulting in a disjointed finish. The best match was the mature Bordeaux, whose developed, rather savoury flavours married well with those of the tartare, and whose structure had enough power to stand up to the chopped steak. When it came to electing the worst pairing, the tasters were evenly split: Martin and Richard felt that the delicate flavours of the Burgundy were overwhelmed by the vigorous tartare. Jorge and I thought the sweet ripeness of the Stellenbosch wine was at odds with the savoury dish and that the aftertaste was dominated by fiery alcohol. In the end, we agreed that neither wine was an appropriate partner. There was general agreement, too, that tartare requires a wine with a bit of structure and savoury, developed characters rather than sweet primary fruit.

The main event was a sampler of three different degrees of done-ness: rare, medium-rare and well-cooked. An intense period of chewing, slurping and spitting ensued. It wasn’t pretty, but it was thorough.

Vigorous debate was fuelled by a protein high, but there was broad consensus that the rare meat worked well when paired with the most tannic wine at the table, the Brown 2010. The firm, youthful tannins seemed to melt into the meat, resulting in a truly harmonious texture. Martin pointed out that structured tannins not only pair well with rare meat, but also help a wine cut through rich fat – one reason why young Bordeaux is often traditionally matched with fatty lamb.

The hefty, rich Stellenbosch wine also fared well when paired with the rare steak, thanks to the combination of dense fruit and supple tannins. The lighter, more delicately flavoured wines – the Beaujolais and the Burgundy – were overwhelmed, their charms drowned in a sea of strong flavours.

These wines fared far better with the more well-cooked steaks, their lively acidity and bright flavours helping bring a bit of vibrancy to the drier, more muted meat. The Brown 2004 was also in harmony with the more intensely cooked steak, which seemed to bring out the wine’s sweet fruit really well, although some of us preferred the outcome when the wine was paired with the medium-rare rather than the well-done steak.

One factor that none of us had really considered prior to the tasting was the degree to which the char on the outside of the steak – the result of intense heat from a griddle pan – would affect our perceptions of the pairings. This smokiness and hint of caramelisation was at its most pronounced in the well-cooked steak, and for some of us the challenge posed by these flavours was best met by the sweet fruit of the New World wines. The complexity of the Stellenbosch wine, in particularly, was highlighted by the smoky meat, which returned the favour by absorbing some of the wine’s alcohol.

This, in turn, has implications when it comes to finding the best wine partner for well-cooked meat. Grilled or barbecued steaks benefit from the heft and sweetness of a New World wine that can meet the challenge of the char. Well-cooked roasts – which don’t have that smoky element to their flavour profile – work best with gentler wines, whether that gentleness is derived from age or from an intrinsic delicacy of flavour and structure.

There was broad agreement, though, that the most versatile wine on the table – in terms of matching steak, however it was cooked – was the Argentine Malbec. The Doña Paula, a new-wave take on the grape that offered refined, bright fruit and supple tannins, turned out to be a Goldilocks wine, with enough depth of perfumed cherry fruit to stand up to the rare meat without being overwhelmed and yet having enough freshness to pair well with the well-cooked steak. The level of tannins – gently grippy and fine-grained – was high enough to cut through the rare steak’s proteins, too. Maybe that old Argentine saw is true: meat really is made for Malbec.