“Jancis [Robinson] hates heavy wine bottles, as I do. Why do winemakers use them?”

This recent Facebook comment – by one of the founders of a smart London wine retailer – seems to represent the views of a significant number of British wine professionals about what Robinson has called “bodybuilder bottles”.

As Simon Woolf wrote in a 2012 blog post on this site, “Winemakers with big egos or ambitious marketing departments often plump for much, much heavier bottles, to ensure that their product shouts “Look at me, I’m premium”. His post included a description of a UK Coop own-label 2011 Argentinian Torrontes-Chardonnay selling at £4.99 and rating 86 Woolf points; and a 2008 “fantastically complex skin-contact white blend” from Istria, called Ines u Bijelom, rating 96 points and selling at £31. The cheaper wine came in a relatively lightweight 420g bottle, while the pricier one weighed in at 960gr.

The clear implication is that the better, costlier wine should, ideally, have been packaged in the same bottle as the cheaper one. After all, the theory goes, we’re buying the liquid, not the container.

If we extrapolate from wine, this presumably means that all those fancy olive oils that have found their way onto the shelves in recent years, should be sold in the same PET packaging as the most basic sunflower oil. There would be no more fancy boxes of chocolates or perfume, and we’d stop wrapping flowers. Apple would stop putting its iPhones in its nice white boxes and the White Company would call a halt on the way it sells its sheets. Focusing on unnecessary wrapping of luxury products would save countless tons of CO2 and help to save the planet. While we’re at it, let’s have a ban on restaurant tablecloths and napkins – think of all the energy that goes into laundering them – and on breakable wine glasses. Those fine Riedel Sommeliers may be nice to drink out of but every time they break and have to be replaced, another tiny bit of damage is done to the environment. 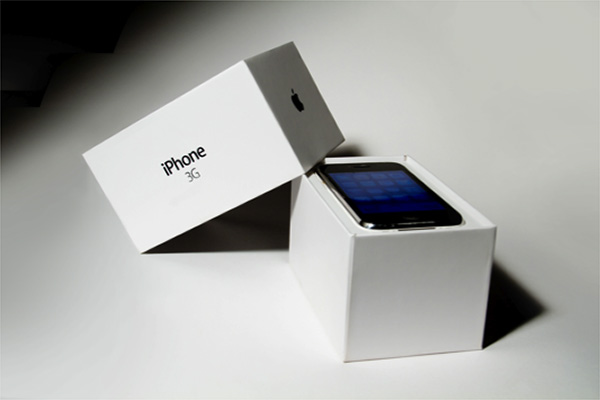 But hold on, I hear someone saying. Nice wine glasses are good to drink from. Heavy wine bottles are just, well… heavy. It’s no coincidence that the people who are most vocal about these opinions are wine writers: they’re the ones, after all, who come across heavy bottles most often, at tastings and on their own dinner tables where they’re frustrated to find, as I just did this evening, that a bottle they thought contained another glass of wine, is in fact empty. 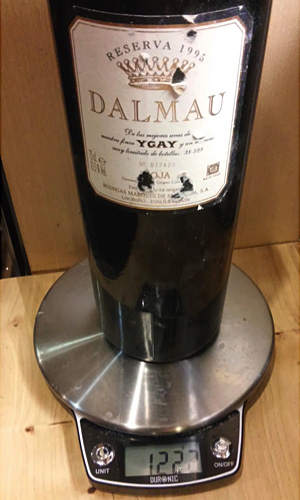 My irritating bottle was a 1995 Murrieta Dalmau which downgraded Woolf’s Istrian to middleweight status. Emptied of all liquid, it hit the scales at 1.22kg, Roughly the weight of his Coop Torrontes before he even unscrewed the cap. But… like the Istrian, the Rioja is a very serious wine, currently commanding a price of around £60. Is there anything any more wrong about either of these wines shouting “look at me, I’m premium” than Tim Atkin or Jancis Robinson doing precisely the same thing when they don their respective Paul Smith and Issey Miyake clothes? And – speaking as someone working on a book on wine marketing – I wonder what’s so wrong with having an ‘ambitious marketing department’. Would the opposite be preferable? Does Woolf really applaud unambitious footballers or cricketers?

Ah, I hear that voice again: what we’re complaining about is the environmental impact of those heavy bottles. As Tim says, “The difference between a 400g bottle (the norm) and a 1kg one (the upper end of the Charles Atlas tendency) is enormous in terms of carbon footprint”. It stands to reason that cutting back on those heavyweights would make a big difference to the wellbeing of the environment. Especially as he says, “you can see [heavy bottles] just about everywhere these days, even in Burgundy.

But Tim is stretching the term ‘everywhere’ to its limits. Even if every single standard bottle of Burgundy were to double its weight overnight, the relative effect on the global impact of wine packaging would be negligeable, because Burgundy produces an absolutely tiny proportion of the world’s wine. Elsewhere, the figures are similarly small. As Woolf says, fewer than 6,000 cases of the Ines u Bijelom are produced and the Dalmau is hardly a high-volume wine. Just take a look at the shelves of the stores where normal consumers do their wine shopping: where are all the heavyweights? With the average wine on sale in the UK leaving the cellars at (much) less than €1.50, the likelihood of a producer spending up to half of that on a bottle is very, very small.

Unlike the critics who may see them almost daily – in line-ups of dozens of samples –  most consumers never encounter heavy bottles at all. And on the rare occasions they do, they’re as delighted as they would be to give or receive a lavishly-packaged box of chocolates. In answer to the question posed at the beginning of this piece, the reason winemakers use them is the precisely same as the reason Apple and the White Company over-package their products: consumers like it.

Unboxing ­- The Apple Experience
Have you heard of unboxing? Apple has. Apple makes sure that the purchase experience doesn’t end when you walk out of the store with your item; they take great care in designing a user experience. From browsing, be it online or in a store, to unwrapping their incredible packaging and installation processes, Apple have the post-purchase bases covered to ensure that your excitement lasts as long as possible. In fact, there are masses of people who record their experience of unwrapping their fresh Apples. No one tells these people to video their experience, but the experience is so therapeutic, that it’s hard not to boast about it. As a result, Apple has built an experience that is virtually impossible to match.

From Marketing, the Key to Apple’s Success by Kim Stretch

The campaigners who – laudably – really want to strike a serious blow for the environment should switch their focus to the billions of £4.99 and cheaper wines that are still being sold in 400g glass bottles. If even one percent of these were packed in the Tetrapak, pouch or PET they deserve (or a lighter 350g bottle, if they absolutely must have glass), the carbon savings would dwarf anything that might be achieved by outlawing even the heaviest of bodybuilder-bottles.

Weighty bottles are an attractive target, of course, because they smack of flashy, newly acquired wealth, but singling them out on environmental grounds is rather like an anti-leather campaigner devoting all their firepower to the relatively tiny amounts of hide used for luxury car seats and designer shoes. Pointless.