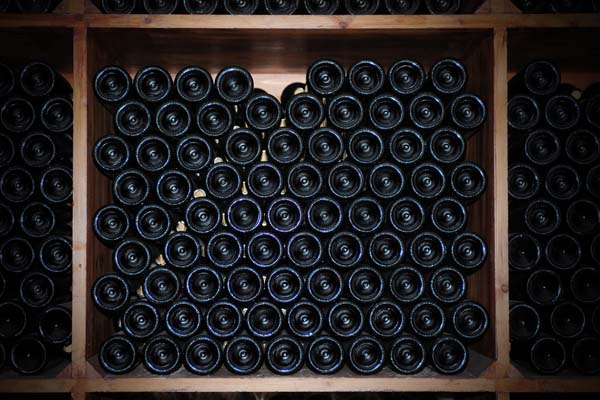 OK, I made a deal with Mr. Koch to tell everything I know about wine fraud. You know, I think it’s going to feel good to get all this off my chest, finally to tell the truth. I’ve been thinking about it a lot in my prison cell, and I’m actually excited. I think it will be cathartic. OK, so here it goes, the whole truth, and nothing but the truth.

It was Al Qaeda. The whole thing was their idea, and they fronted me the money. They’re Muslim, and they hate alcohol, and they wanted to bring down America by flooding it with counterfeit Burgundy. They recruited me to be a jihadi suicide Pommard. And it would have worked if I hadn’t screwed up that vintage on Ponsot. I only did it because they threatened to kill me, and…

Alright, that’s not quite the truth. Well, it’s not even the least bit true. Sorry. It wasn’t Al Qaeda. Sorry, Al. May I call you Al? No hard feelings. OK, now here’s the truth.

It was Sarah Palin and those Tea Party jackasses. I was the front man, I had all the wine contacts, but I gave them all the money, which they told me they used to help the mentally challenged, that is, Tea Party Republicans. I didn’t want to do it, I just…

Yeah, that’s not it either. But I bet I had you going there! Hey, how do you know it’s Sarah Palin if you meet her in the frozen food section? She’s the one past her “Use By” date. Oh, man, I love prison humor. What’s the difference between Sarah Palin and a dick? About two inches south. Yeah, OK, I know, I’m stalling.

So this is what I know. Once I started selling the fake wines, I got addicted to it. Then everyone began to pitch in and help me, make it easy to keep doing it, facilitating the sales, and I just couldn’t stop. I was like one of those guys who has six different wives and families that don’t know about each other. It’s not actually about fucking a bunch of different people, it’s about getting away with it. How easy everybody makes it for you to get away with it. And for once in my life I was a Somebody.

I had some money when I started. I bought all the 100 Point wines I could. Well, Parker 100 Point Wines. A Tanzer 100 Point wine compared to a Parker 100 Point wine is kinda like pesos compared to dollars. So I’d haunt all the wine auction websites and buy Screaming Eagle and Marcassin and Guigal La-La’s and all that other grape shoe polish, and I’d drink them. But, I don’t know why, I never threw away the empty bottles, just kept them as trophies. I was lonely. I was young. I had no friends in the US, but once I started to share my notes about these rare wines on chat rooms, offer to meet other wine lovers for dinner, bring all of these trophy wines to drink, I started to become popular! I had a nickname! Dr. Conti.

For all the Domaine de la Romanée-Conti wines I opened, most of which, towards the end, were nine parts really old Chalone Pinot Noir, one part Johnny Walker out of airplane bottles. Richebourg got Maker’s Mark. Anyway, it felt good to have friends, and I valued them enough to only serve them the very best fake wines.

One day it dawned on me. I had one big advantage over all the rich guys I knew who were into drinking these 100 Point wines, into consuming, and bragging about, the oldest and rarest and most legendary wines. My advantage was simple. I knew I was a wine fraud; they’d never admit they were.

After that realization, it got easy. And I was this mysterious Asian kid with the Greatest Wine Cellar in the World. If I’d been from Arkansas, the whole charade never would have gotten off the ground. It didn’t even matter that I was in my early Thirties! They loved me! Among these rich old white guys, I was the inscrutable Charlie Chan of wine, their charming Chinese houseboy, Hop Sing. Well, now Hop is Singing.

I knew I could make a lot of money selling fake wine. I just had to learn how to make convincing fakes. Which meant I had to learn what NOT to do. The most embarrassing thing would have been to be caught by my new friends, to make obviously fake wines! To be seen in their eyes as a fraud. Deep down, everyone who professes to know a lot about wine fears that one day everyone will discover he or she’s full of shit. I bet even Robert Parker feels this. And Jancis Robinson. Maybe even James Suckling, who doesn’t seem to know everybody already knows he’s full of Italian shit.

I knew only bad luck would lead to my unveiling. You know, in hindsight, it took a lot longer than I expected.

It turned out to be easy to fake old labels. There are places in China that can fake anything you want — clothing, purses, jewelry, wisdom… Wine labels are a snap. Hell, I probably could have done it at Kinko’s. I mean, think about it. How do you fool a wine expert? Don’t try. He’ll fool himself. Wine is mostly about the power of persuasion, the way we convince ourselves that everything we experience is real — love, success, money, our partner’s orgasm. It just has to SEEM real, be close to real, and he’ll do the rest — convince himself it’s real, and fight to the death to defend his own opinion. “Yeah, that sure looks like ’47 Lafleur. Damn, it tastes like ’47 Lafleur. Hell, I just had ’47 Lafleur!” Only the first statement has any truth. The rest is imagination and wishful thinking. Suckers.

When you think about it, no one bought wine from Dr. Conti. They bought it from Acker Merrall. Acker Merrall was so amazed at my collection of wine, I was even amazed at my collection of wine! Here was a young Asian guy, an illegal alien mind you, purporting to have an endlessly deep cellar filled with all the wine treasures of France, and all they did was help me sell it. Again, if I were from Arkansas, the whole charade would have fallen apart. But I’m Asian, we have all the money, we’re mysterious and shady. What’s not to believe? I played to that. And, in their own best interest, they chose to believe me. Provenance? How dare you? We’re Acker Merrall. We know provenance when we see it. Look at the guy! He’s got to be legit. He’s a wealthy Asian! Sheesh. Fucking provenance.

I spent all night labeling fake wines. And instead of being questioned, I became famous. You see, I knew one other thing. The producers I was faking, I was helping. My old fakes of their real wines drove up the value of their current wines. Someone sells a copy of the ash tray you made at summer camp for a thousand bucks, believe me, you start making more ash trays and jacking up the price. You don’t start screaming, “It’s a fake!” I suddenly had the same power as Robert Parker! Wine prices shot up quickly after appearing on my list of auction fakes. It was thrilling. I love power. Charlie Chan outsmarts the white people again! I get hard just thinking about it.

The people who paid all the money for my fakes? Oh, they knew it. Somewhere in their insecure little hearts, they knew it was a con game. They got what they always secretly desired in their self-hating little souls — exposed as fools. In one way or another, I guess, wine makes fools of all of us. In our drunkenness, in our covetousness, in our hubris and our vanity. Wine is a reflection of who we are, and, you know what, all I did was reflect back at all those rubes that they are simply Narcissus. In those rare and highly-rated wines they see themselves, truly desire to see themselves, and they fall deeply in love. That they’ve fallen in love with a fraud? Well, they knew that from the beginning.