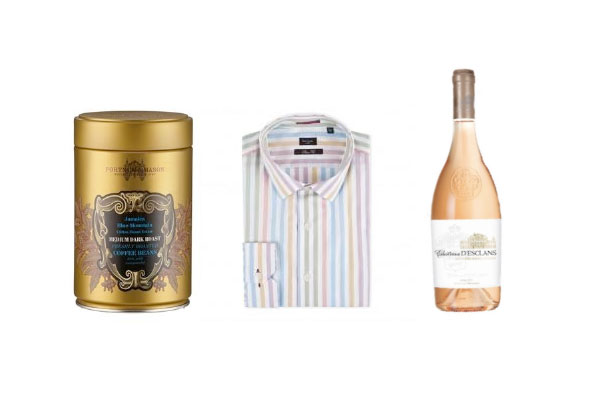 Two strangers, a man and woman meet at a cocktail party. The man turns to the woman and says, I’ve got a hypothetical question for you.

The woman, whose curiosity has been piqued, says “OK ask away…”
“If a reasonable-looking man you don’t know were to offer you a million dollars to go to bed with him, would you do it?”
The woman thinks for a long moment and finally, with some hesitation, answers “I guess I would… for a million dollars.”
The man smiles and says “Then will you sleep with me for $25?”
The woman, with a shocked expression, screams,
“Of course I won’t. What do you think I am!”
To which he calmly replies, “We’ve already determined precisely what you are, now we’re just haggling over the price.”

If you answered “no” to all 10 questions, congratulations, you are a highly rational person. Most of these options are simply unnecessary expenditures, and all cost more than anyone actually needs to spend on them. You are also quite probably the kind of person I really wouldn’t want to go on holiday with.

If you answered “yes” to at at least one, I know precisely what you are too: you’re an irrational consumer, someone who, for whatever reason, is prepared to dig deeper into their wallet than is truly necessary. Now we’re just haggling over the price. It doesn’t matter whether your irrational expenditure is explained by a particular interest or passion (for wine, coffee, sport or music for example), or out of concern with the way other people see you: in either case, you are an essential part of the capitalist system. (Of course, it’s possible that you may have simply said yes to all of them because you’re obscenely rich, but in my experience even the mega-wealthy have hierarchies of expenditure).

So let’s get back to the haggling. Ask a few other people to answer the same questions and compare their responses to yours. Where do you differ? Then, take another cool-headed look at the options. What’s the maximum price you’d pay for the options to which you said “no”? And how far off the £100 is that figure? What about the options to which you said yes? How much more than £100 would you pay for a watch, for example? And which, if any, of the expenditures struck you as “ridiculous”?

That was the word a friend of mine – whom I’ll call Jean-Pierre – used when I asked whether he could imagine selling a bottle of his Southern French wine for £100. Of course not, he responded. The £20 he’s asking for it is quite enough – despite the unprofitable state of his business. Even £50 would be silly. Explain “silly”, I responded. Because the wine’s not good enough? Or simply because no-one would pay that much for it? It’s just not worth £100 he said. Ok, I hit back, Is it worth less than Ch d’Esclans Rosé which is produced in the same region and sells for, yes you guessed, £100?

No rosé – apart, maybe, from Champagne is worth £100, he said, falling into my trap. “Worth” I replied, is an absolutely subjective term, whether you are talking about shares or gold or your home whose value can go up and down from one day to the next, or options like the ones above. I don’t, as it happens, spend £100 on a haircut (as some people may have noticed), so I was interested to read that, in 2008, The Sultan of Brunei apparently splashed out $34,000 on having his locks trimmed. He flew in Ken Modestou the resident hairdresser from London’s Dorchester Hotel. To attend to him at his palace. The 14,000 mile round trip in a private suite on Singapore Airlines reportedly accounted for much of the difference between that particular short-back-and-sides and one he might have had from the same barber at the Dorchester for the standard price of around $43. Presumably, for the Sultan – whose own fortune in 2010 was estimated at $20bn – it was “worth” it.

Ok, $24,000 is undeniably a ridiculous price for a haircut. But what about $500,000 for a watch? For the Richard Mille ROM027, as worn by Rafael Nadal, to be precise. Only 50 of these were made, but all sold out, with a further 100 would-be buyers apparently going unsatisfied. “There were a lot of people screaming because not everybody could get a watch. Demand is higher than what we can produce.” Mille said, claiming that the production run was limited to 50 because the watches were so difficult to make.

I don’t know how much it can possibly cost to manufacture a watch. I do know that it is almost impossible to spend over $25 on making a bottle of wine, and pretty damn difficult to run up a bill of over $15. Which raises interesting questions about the 370 Napa Cabernets listed on Wine-Searcher at $100 or more per 75cl bottle.

So back to Jean-Pierre. What if he were to cross the mental and philosophical rubicon and produce just one barrel of £100 wine? Well, firstly, he’d have to take a good look at how much better he could make it than the £20 stuff he’s currently producing; if you’re charging Rolls Royce prices, you have to offer Rolls Royce quality. On the other hand, with the extra margin he’s making, J-P can stop cutting even the smallest of corners. In a blog post evocatively titled Why People Want to Pay You More Peter Shallard describes how a photo lab owner (aka the place you had to go in the days when cameras used film) one day doubled his rates. His customers were, unsurprisingly, furious. Half immediately took their custom elsewhere; the rest shrugged, realized they had been getting their photos too cheaply… and swallowed the increase.

Overnight, the lab-owner had nearly halved his operational overheads while maintaining all of his revenue. He then spent the extra profit (and time!) tarting up his shop to attract new, wealthier customers.

J-P would have to do some serious benchmarking of his wine against others selling at high prices, and possibly accept that his new £100 wines might not actually be as close to his personal taste as the wine he’s currently making. I know of at least one producer who matter-of-factly acknowledges that they rarely drink their super-premium Parker 90+ point wine. Not that they dislike it, but that, like a chef’s foie gras dish that is popular with his customers but rarely eaten by its creator, it may be more of an occasional pleasure. A Rolls Royce may not be the ideal vehicle to use for a trip to the supermarket or garden centre.

By the same token, J-P will have to understand that, in the case of those super-premium wines at least, he may have to part company with some of the people who are buying his wines today. J-P already had some experience of this when he raised the prices of his wines from their previous €10. Some of his best friends and family no longer buy his wines.

However… he’ll discover that the makers of super-premium products enjoy another, perhaps surprising, side-benefit. People who pay high prices tend to be a lot more loyal than the bargain-seekers. Just take a look in the cupboards of women who carry Louis Vuitton handbags or wear Louboutin shoes – and I’ll bet that you’ll find lots of other products with those same brand names. And, as the photo-lab owner discovered, and LVMH annual results reveal, high-payers are good for the bottom line. 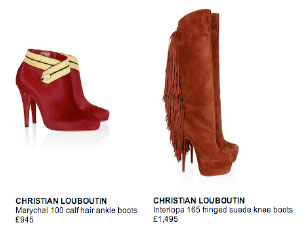 When thinking about “ridiculous” prices, J-P might like to consider a few Champagnes. Setting aside Cattier’s blingy gold-plated Armand de Brignac non vintage. 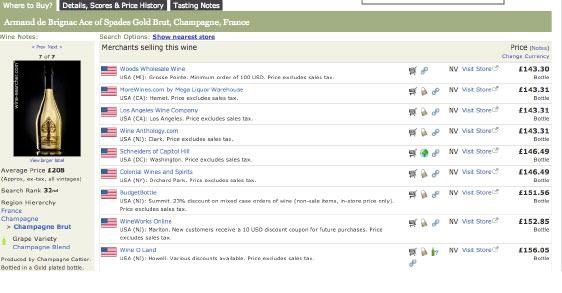 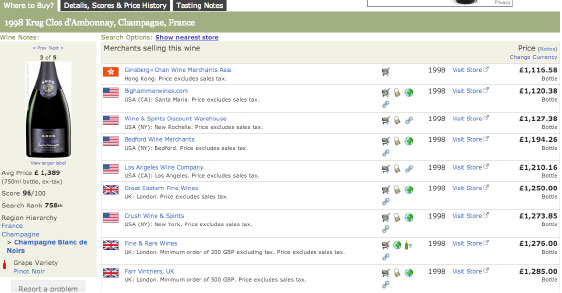 He could look at the relatively mainstream Laurent Perrier Rosé. 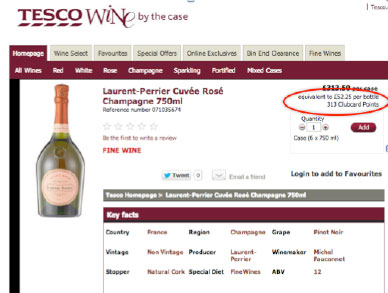 Now, I don’t happen to think that this is one of the best pink wines in Champagne and a price tag of £52 at Tesco might justify some people’s use of “ridiculous”. But there’s no shortage of buyers for this iconically packaged fizz, either for £50-60 in a shop or £100 in a restaurant. It may not be “worth” that price to me, but it’s evidently perfectly good value to the people who buy it.

Offering genuinely good value can, however, go unrewarded. Charles Heidsieck has been one of my favourite Champagne brands for many years, and one that I and others applauded for launching its innovative Mis-en-Cave individual non-vintage cuvées and for its affordability. Highly-praised, fairly priced, frequently-award-winning Champagne… What could be wrong with that? Only the fact that it was hard to sell, and was fundamentally unprofitable. Far too much ended up being served by airlines, who are not known for their readiness to pay top prices. Finally, in 2011, its owners, Remy Cointreau gave up and sold the brand to a clothing company. 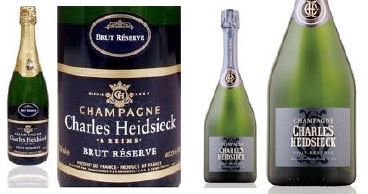 Today, Charles Heidsieck has been rebranded and repackaged and it is being “repositioned” – in other words, its price will rise to set it in line with brands like Bollinger. The quality may be marginally improved as well, though I don’t recall any of us complaining about what we were getting before. Critics will probably bridle – just as I once would have done – and just as most regularly do – and I used to – at the price of Cloudy Bay.

The correct value of anything is the amount people are prepared to pay for it. Like Tim Atkin, I do a fair amount of public speaking. I’ve addressed a wide range of audiences for a wide range of fees, some of them – thanks to my agent – far higher than I might ever have imagined being able to command. I try to do my best, irrespective of the money, but over the years, I’ve learned that, the more people pay, the nicer they are to me and the more appreciative of my efforts… And the same, I guess applies to anyone sitting down to enjoy a glass of £100 rosé.

When I have these conversations with J-P, he sadly looks at me and says “you sound like a clothing advisor to the famous emperor with the new suit of clothes. I used to think of you as the little boy in that story”.

To which I have two responses. First, that the story of the naked emperor was just that: a story. In the real world, the little boy’s comment would have gone unheard by the courtiers – just like the comments of people who dare to suggest that Damien Hirst doesn’t deserve to be one of the richest artists in the world. And secondly, maybe the little boy simply grew up. To be brutal, I’m now happier to see people getting pleasure out of spending their money as out of saving it on half-price bottles in British supermarkets.

Here, for the fun of it, are my answers to those initial questions.

£100 to watch a team you care about in a really big match – Yes. I think it was worth over £100 to watch Fulham almost fight off Manchester United last weekend. (Though I couldn’t have predicted that from their previous form).
£100 per person for a Michelin-star quality meal – Yes, up to £150. Then I’m not so sure…
£100 for a watch – Yes, but over £250..? I can imagine going further for something special and old
£100 for a shirt – Yes, but I wouldn’t pay £225 for the Paul Smith shirt I used as an illustration above.
£100 to see the Rolling Stones/Bowie/Domingo/Prince/Dylan/Yo Yo Ma (or your favourite musician) – Yes. Friends who saw the Stones in London before Christmas said it was worth any price…
£100 to get your hair cut – No.
£100 for a bottle of wine to drink at home – Yes, but how often would I go over £150. (Talking about buying at that price, rather than drinking a wine whose value has risen there).
£100 for a couple of pillow cases – No, but that is the right price at the White Company for the pillow cases in the picture, and friends who do buy from them love the boxes in which the linen is delivered.
£100 for a handbag – Yes, but where’s the ceiling?
£100 for 500g of Fortnum & Mason Jamaican Blue Mountain coffee – No way.