“I like to drink wine more than I used to. Anyway, I’m drinking more.”
Marlon Brando, ‘The Godfather’ 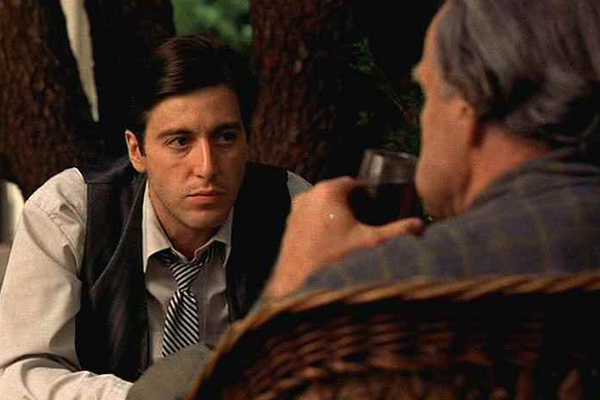 With his proceeds from ‘The Godfather’ director Francis Ford Coppola bought himself a winery. They made him a quaffer he couldn’t refuse. Before the film was released a secret screening was arranged for a select group of genuine mobsters. Members of this intimidating focus group were not offended by the maiming and mayhem, the maltreatment of women and horses or the negative stereotyping of Italian-Americans, but they were incensed when a cooking capo added red wine to a spaghetti sauce. There are crimes worse than murder.

I once worked with a wine-sponsor of the Australian Film Institute. Our intention was to further enhance the natural symbiotic relationship between wine culture and the creative arts. And to meet actresses. I took advantage of an opening speech on awards night to admonish the assembled talent for maligning and marginalising wine in movies. The wine game has much to offer motion pictures – colour and movement, sex and violence, comedy and drama, love and regret, betrayal and redemption – and that’s just the first week of vintage. But the last time an Australian movie was set in a winery was 1970. You know you have reached your audience when you are amiably heckled by Scott Hicks, another director who has taken a shine to making wine.

Vineyards attract stars almost as much as they do starlings, surgeons, Asian investors and corporate receivers. The expanding cast of actor-vintners now include one Ghostbuster, a material girl, Mr & Mrs Smith, Puss in Boots, a former head of The Police and the prickly palaeontologist from ‘Jurassic Park’. In entertainment today a cabernet connection is as necessary an accessory as a sex tape, a stint in rehab and a Benetton of adopted babies. A winery is a socially acceptable capitalist pursuit and reads better on a Fantales wrapper than owning an oil well in Uzbekistan or a sweatshop in Santiago. And stunt-doubles stand in for dangerous action scenes, like picking, pruning and winemaking.

Gérard Depardieu, who has appeared in every French film since the Lumière brothers invented the cinématographe in 1895, wields winemaking influence in three French regions and seven countries. By the look of him lately he is his own biggest customer after Belgium. Depardieu says he prefers winemakers to film-directors because “they don’t talk as much”, that wine doesn’t really count as alcohol and that he drinks five or six bottles a day when troubled and a moderate three or four “when times are sunnier”. How will he cope with global warming. Vinosity can also be born of necessity. When Orson Welles was asked why an actor of his ‘Citizen Kane’ stature was reduced to spruiking Spanish Sherry on television his answer was as dry as a Flor Fino: “Do you know what alimony costs these days?”

Rarely is wine integral to a film and even then it is often what Alfred Hitchcock called a ‘MacGuffin’ – a plot device that purports to be pertinent but isn’t – like the glowing briefcase in ‘Pulp Fiction’. Perhaps wine loses its mystique on screen or simply can’t convey the sensory experience via sound and light alone. And a Vinomatic is not that cinematic. Usually the wines sipped and served in movies are either vinous anonymous or blatant product placement.

The James Bond film franchise is a wine category on its own. In the first Ian Fleming novel Bond invented a dry martini he named the Vesper – three measures of gin, one of vodka, a splash of citrusy Kina Lillet, shaken and not stirred until ice-cold and served with long thin slice of lemon peel in a deep champagne goblet. That’s about five standard drinks in one aperitif. No wonder he crashed so many cars. In ‘From Russia With Love’ 007 identified a double-agent as no Englishman because he ordered red wine with fish. If you can name the wine and the fish you are as much in need of intervention as I am.

James Bond may be a ruthless killer, a compulsive womaniser and a man’s man, but he is an effete tosser when it comes to vintages, temperatures, sherry soleras and the serving of sake at precisely 98.4 degrees Fahrenheit. There’s one in every wine club. He’s forever fussing over whether the Bollinger is a ’53 or a ’55 and fiddling about with ice-buckets. Hardly high priorities when you’re about to be bisected by a laser, vivisected by a shark or retrospected by Halle Berry. The early films showed some respect for what Bond imbibed in the books, but he now changes his Champagne allegiance as often as he switches watches, depending on the deal. In ‘Casino Royale’ the new blonde Bond takes a quantum of solace from a prominently positioned bottle of St-Emilion. The owner of the château described the impact on sales as “unbelievable”. Asked if his label would remain Bond’s Bordeaux of choice in future, he responded, “Yes, as long as somebody doesn’t pay more than we did”. The ‘Double O’ number was once a licence to kill. Now it’s a liquor licence.

Wine lovers have been poorly served by Hollywood, as some sour examples testify. ‘Year Of The Comet’ was a romantic romp in international pursuit of a multi-magnum 1811 Château Lafite, but the film proved as much a fizzer as the latest sequel of Halley’s Comet itself. In ‘A Walk In the Clouds‘ Keanu Reeves battled a vineyard fire that looked like the napalm strike in ‘Apocalypse Now’. ‘A Fine Year’ was set in Provence but could have been anywhere, and Russel Crowe’s British accent sounded like a telephone had been thrown at it. In ‘Blood And Wine’ Jack Nicholson played a wealthy wine merchant but acted like a demented drug dealer (on second thoughts). The recently released ‘Blood Into Wine’ I have not seen and will not, but the promotional poster features a corkscrew attached to a knuckle-duster.

Sometimes cinema gets it right. Whoever set-designed the cellar for ‘Remains Of The Day’ knew their wines as well as Anthony Hopkins knew his lines. Playing the busiest of butlers Hopkins faithfully fetched fortified wines from downstairs to fortify the international intrigues upstairs while his boss betrayed Britain to the Bosch. Film critics completely missed the central tragedy of this story. It was not that Hopkins never noticed true love standing right beside him all along until too late. It was that he dropped and smashed a bottle of 1913 Dow’s Vintage Port. May be the only time I ever wept in a movie.

There are rare examples where wine is centre screen. Hitchcock’s ‘Notorious’ placed a pomaded Cary Grant cellar-deep in Pommard. ‘Bottle Shock’ dramatised the history-making 1976 ‘Judgement of Paris’ when America first beat France at its own game on its own turf. Alan Rickman portrayed real-life wine merchant Steven Spurrier as Severus Snape in a 70s suit, and proved that wine-judging as a spectator sport is as boring as a bottling line. ‘Mondovino’ is a hand-cranked documentary of a fermenting feud between implacable foes. Cloth-capped traditionalists defend ‘terroir’, which means wine should taste of dirt, against a technocratic purveyor of ‘micro-oxygenation’ which makes French wines taste American. A cheese-stealing dog steals the movie.

‘The Vintner’s Luck’ is a visual treat, though with a title like that it was doomed from the start. Viticultural imagery saturates the screen with gripping footage of foot-pressed grapes and participants in blind tastings actually wear blindfolds. There goes another Riedel. The film romanticises 19th century peasant life, but that’s what peasants were for. It also shows how easy winemaking is. All you need is a chiselled jaw, a determined gaze, a puffy shirt and an angel to help out during vintage. We all could have used one of those in 2011.

‘Sideways’, the best of the bunch, expresses the inherent incapacity of men to move forwards emotionally. Miles is the lonely guy who no one notices except when he talks and tastes wine. Only then does he command authority, attention and respect. You all know one, have met one or married one. He brings his own personal gloom to the sunny cellar doors of California’s Santa Ynez Valley where he is semi-redeemed by a luminous Virginia Madsen, a self-inflicted spittoon and a solitary bottle of ’61 Cheval Blanc drunk from a polystyrene cup. An emphatic profanity in the film was blamed for a subsequent slump in sales of Merlot. I suspect the drop itself bears some responsibility for that drop but the link is feasible. Singlet sales took a similar dive in 1934 when Clark Gable happened to remove his shirt in ‘It Happened One Night’ and wasn’t wearing one.

Only wine-tragics notice wine gaffes in movies but they paid for their tickets too, unless they are sponsors. ‘Edge Of Darkness’ – the infinitely superior original without Mad Mel – featured a nuclear fallout shelter, stocked and sealed during the Cuban Missile Crisis, from which a First Growth is unearthed and uncorked. Problem being the wine was from the same year as the crisis, a vintage that would not have seen daylight for another decade. Bordeaux doesn’t release wines the month they are made and I doubt even Beaujolais did back then. An otherwise impeccable script-writer reached for his almanac, and goofed.

Who cares? Well, if you’re more into Romanée-Conti than romantic comedy you will care. Walt Disney described cinematic sleight-of-hand as ‘the plausible impossible’. We don’t mind mistakes in movies as long as we don’t notice them and anachronisms are acceptable if they are true to the genre and don’t interrupt the flow. Audiences forgave Spartacus speaking English but not for sporting a 1950s flat-top crew-cut.

‘The Godfather’, for example, was set in the 1940s but dedicated label-spotters noticed Italian wines wearing ‘DOC’ stickers, guarantees of wine origin not introduced until 1963. 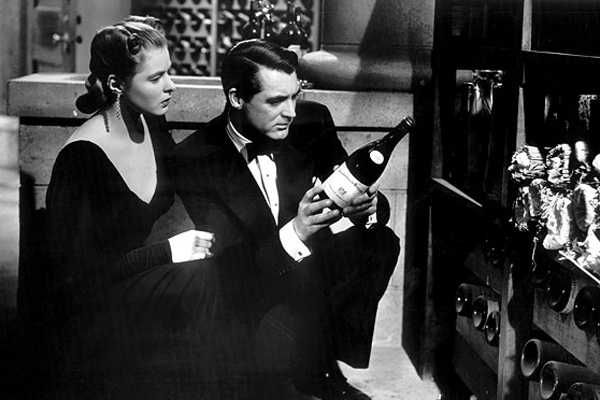 ‘Wine At The Movies’ Quiz.

Discover how wine tragic you are by completing our wine-movie quiz. As with wine-judging, originality and creativity will count as much as technical accuracy or pristine perfection. Entries close at the end of July. The first prize is a DVD copy of ‘Mondovino’ and the second prize is two copies.

1) With which Champagne did Humphrey Bogart woo Ingrid Bergman in ‘Casablanca’?

2) ‘Squeeze A Flower’ (Squeeze A Grape) was filmed in which historic Hunter Valley winery?

3) Which California winery was founded by Davy Crockett and Daniel Boone?

4) In ‘Casino Royale’ what wine does James Bond drink on the train to Montenegro?

5) Which hallowed Barossa wine-label can be seen in the film ‘Lantana’?

6) In ‘Star Trek: Generations’ which prestige Champagne was used to launch the USS Enterprise and what was (or will be) its vintage?

7) In ‘A Clockwork Orange’ what wine was Alex insistently proffered by his vengeful host? (And don’t judge the wine by its colour).

8) What wine did Mr Creosote order in ‘Monty Python’s The Meaning Of Life’, which vintage and how many bottles?

9) Name any wine label that appears in Hitchcock’s ‘Notorious’.

10) What is the ideal wine to serve with liver and fava beans?