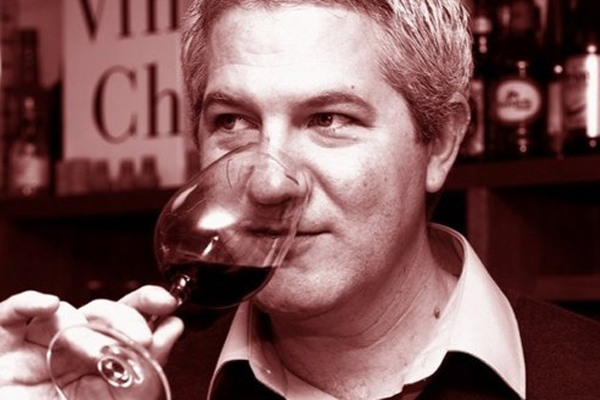 It does not sell Armand de Brignac ‘Ace of Spades’ Champagne, nor does it sponsor the drinks at footballers’ weddings. The Wine Society doesn’t court the ‘glamour’ end of the drinks business. It quietly gets on with what it has been doing for 138 years – sniffing out interesting and authentic wines and supplying them to its members. So it might be surprising to find that one of the wine buyers at this venerable company was resident DJ at seminal house club Checkpoint Charlie in the early 1990s, playing warm-up sets for superstar DJs. I asked Pierre Mansour to bring a selection of his favourite dance tracks to listen to over lunch accompanied by a few of the Society’s latest finds at Duck Soup in Soho, where you can take your own vinyl.

We started off with one of the first records he ever bought: Frankie Knuckles, Your Love, Trax Records, 1987.

Pierre, or DJ Pierre M as he was known back in the day, was lucky enough to get into both wine and music during the late 80s. This was the start of ground-breaking eras for both music and wine, and he experienced both first hand. The birth of popular electronic music at this time provided an infinite new palette of sounds for producers to play with, and it quickly crystallised into an array of original and distinct new styles. For wine, this period saw the coming of age of New World wines. Previously there was little choice for the wine drinker other than the European classics; then, all of a sudden, vibrant new styles from California, Australia and New Zealand started breaking through.

Nonetheless, Pierre’s career progression might be unexpected. At first glance, these two jobs couldn’t be more different, which is probably why Pierre usually keeps his part in the 90s clubbing scene to himself. But they are more similar than you might think. Both involve a type of editing: trawling through hundreds of examples of a particular style to compile a selection that you think is special, one that will excite and inspire. Both rely on keen physical senses, and in-depth knowledge of the styles you want to promote. Both are about bringing pleasure to an audience that share your passion.

Asking him to choose between wine and music, Pierre gives a tortured smile: “Wine is my job, but I couldn’t give up either… life without wine or music, I mean Christ… I couldn’t pick one over the other.” He first got into wine at university. He would often drink a bottle with friends, but occasionally he shared bottles with his dad, who was building up a collection. The quality and complexity of flavour of what he drank at home was a big contrast to the more simple stuff he drank with his mates. It made him realise it was something worth exploring, so he enrolled himself onto a wine course. This led to a job at a Berry Brothers wine shop at Heathrow Airport. Because of the shop hours, he had to work a three days on, three days off shift system, which gave him plenty of time to concentrate on music in between.

Though not based in London, the club soon started attracting international DJs thanks to the pristine quality of the sound system. He soon found himself warming up for the likes of Billy Nasty, Terry Francis and Carl Cox, and playing in clubs like Slam in Glasgow, the Ministry of Sound in London, and further afield in France and Amsterdam.

This one is a track written by Pierre and friends: Jefferies Lee, Echo Jazz, Abnormal Records. Also featured on ‘Tyrant: No shoes, no cake’ – a Fabric mix CD compiled by Craig Richards in 2002.

At this point his career could have gone either way, spending half his time working in wine and half in music. After completing the Wine & Spirit Education Trust Diploma he found himself gravitating towards wine, even though the scene was quite stuffy back then. His main motivation? The people. Despite being fun, the music industry had too many big egos to contend with. It’s hard to imagine two more different scenes in 90s Britain: sedate, studious wine tastings in St James’s by day; booming futuristic sounds in warehouses by night. But it was partly thanks to the large-scale parties of the early 90s that these social barriers began to dissolve.

Things have moved on a lot since then, and the wine scene has changed as much as the musical landscape. When he was first working in wine, most of the people he met were “ex-public school and the nobility”, but since then wine has opened up to all walks of life: “Wine is trendy – much more than it used to be. Many myths have been removed”. He explains that this is partly thanks to supermarkets making wine more accessible, and partly to the general standard of wine on offer improving. Pierre’s tastes in music have also developed, but remain resolutely electronic.

To Pierre, the parallels between music and wine are clear. One thing he finds particularly fascinating to explore in both is regionality. He points out that as grape varieties like Chardonnay and Pinot Noir have distinctly recognisable regional styles, so do types of music. House music from London is very different to that produced in Chicago, New York or Paris, and they are immediately recognisable to aficionados. Like the regional differences wine lovers pick up between Sauvignon Blancs from the Loire, California or Marlborough.

It’s not surprising that so many music lovers find themselves drawn to wine, and vice-versa. The guys that import XL Records in Australia are wine nuts. Mike D from the Beastie Boys blogs on wine for James Suckling’s website. DJ and label boss Giles Peterson is certainly partial to a nice drop of red. After all, wine, like music, is entertainment; just for the mouth and nose instead of the ears. They are both better shared. Both can be cover a range of styles. And whether you’re into classical, disco, or house; Chardonnay, Syrah or Steen – there’s a style out there to suit everyone’s taste. And it’s thanks to selectors like Pierre that we get to sample the best.

Thanks to Duck Soup in Soho for letting us borrow their downstairs room.

2010 Prince Ştirbey, Tămâioasă Românească Sec (£9.50)
100% Romanian Muscat grapes from Dragasani, Romania. Perfumed, floral and grapefruity. Very clean and fresh. Smells like it is going to taste sweet, but has a dry, clean, perfumed finish. Best Romanian wine I’ve had in a while.
88 points, good value.

2009 Forstmeister Geltz-Zilliken, Riesling Kabinett (£13.25)
100% Riesling grapes from the Mosel, Germany. Mandarin, sweet lime, lemon, and a whiff of white pepper. Medium-bodied, with zingy acidity and a finish like striking a tuning fork. Low alcohol (8% ABV) is a bonus. It reminded us a bit of electro – crystal clean and precisely defined sounds/flavours. We tried listening to some at the same time to see if it improved the flavour of the wine or the sound of the music. Did it make any difference? No, not really. Didn’t matter – great wine anyway.
90 points, good value.

2010 Cruz de Piedra, Garnacha, Calatayud (£5.50)
100% Garnacha (Grenache) grapes from Calatayud. Intensely fruity nose, mostly strawberries, with a little hint of cocoa. Simple quaffing stuff but well made. Cheap Garnacha often has too much alcohol or too little acidity – but not this one. “Beaujolais on steroids” Pierre suggested – a pretty accurate summary.
87 points, good value.

2006 Château La Dauphine, Fronsac (£17).
A blend of Cabernet Sauvignon and Merlot grapes from Fronsac. Mellow, rich, stewed dark fruits – 6 years on and it’s showing some age (in a good way). Medium-bodied, with a silky texture and soft tannins. Dry, but with a hint of sweet ripeness to the fruit flavours and a bit of cola from the oak ageing. Smooth, drinkable and a little bit luxurious. 89 points, good value.