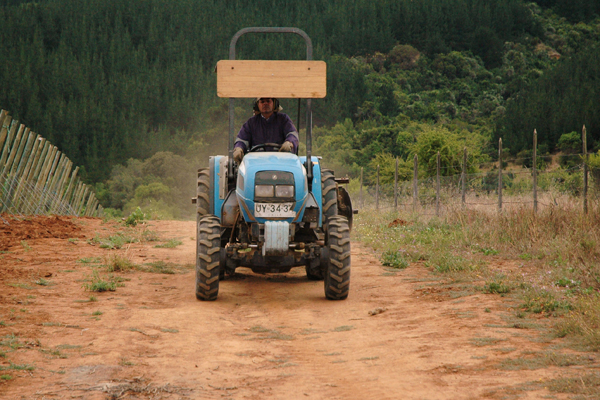 Think of a word to describe the Chilean wine industry. Dependable? Consistent? Mass-produced? I’ve played this game with consumers and Chile generally elicits such responses. People in the wine trade feel the same way. Chile is respected as a source of honest, decent value wines, but rarely quickens the pulse; hence my description of the place a few years ago as the “Volvo of the wine industry”.

I’m not the only person who has courted the wrath of the Chileans. Indeed, the Spanish ex-pat José Manuel Ortega Fournier, who owns wineries in Chile as well as Argentina and Spain, was far blunter when I visited him in 2010. “In Chile,” he told me, “wine comes from the cheque book, not the heart. There is a lack of understanding of what wine is about. It’s not like planting blueberries or kiwis”.

And yet Chile is changing, arguably at a faster rate than neighbouring Argentina. Not before time, it is beginning to take a few risks, flirting with failure in order to achieve greater success. Interesting? Pioneering? Challenging? It might sound a little far-fetched, but it’s time to consider some new Chilean adjectives.

In the last month I’ve attended a tasting of boutique wines hosted by Wines of Chile, the launch of Clos des Fous by terroir expert, Pedro Parra, and sampled a dozen old vine Carignans with Derek Mossman, the founder of MOVI (Chile’s Movement for Independent Vintners) and the man behind the recently formed VIGNO, a group of producers championing old vine Carignan.

If you add the work being done by winemakers such as Marcelo Retamal at De Martino, the biodynamic advocate Alvaro Espinoza at Viñedos Orgánicos Emiliana and Antiyal, Rafael Tirado at Laberinto, Felipe Tosso at Viña Ventisquero, Paula Cárdenas at Matetic, Louis-Antoine Luyt at Clos Ouvert and José Manuel Ortega Fournier and his team at O Fournier, you can understand why Chile is finally beginning to shed its ultra safe image.

Chile may be dominated by large wineries – some of whom, like Concha y Toro and Santa Rita, make some of the country’s best wines – but it’s great to see a new generation of boutique producers emerging. Discoveries at the Pequeñas Chile event included Viña Ventolera, Armidita, Camino Real, Junta, Doña Javiera, Ravanal and Viña Maquis. The tasting would have been even better if it had included the members of MOVI, who are not part of the Wines of Chile programme, but was still fascinating.

So is the whole Clos des Fous project, created by Pedro Parra and three friends. The aim here is to produce a series of wines from different Chilean sources, matching terroir and climate to grape variety. Parra believes that rockier volcanic and granitic sites in the Andes and coastal ranges are far better suited to fine wine than the more fertile Central Valley. “Historically, people planted close to Santiago so that they could go home at night,” he says. “But we have to change our protocols in the New World, or we are dead.”

The three releases to date – a Chardonnay, a Pinot Noir and a Cabernet Sauvignon – are all promising rather than spectacular, but Clos des Fous is just beginning. Potentially, the most interesting wine is a red blend called “Cauqenina”: an old-vine Carignan combined with Syrah, Carmenere, País and Blauer Portugieser.

The Carignan will be sourced from close to Clos des Fous’ home base in Maule, which would be my nomination for Chile’s most exciting wine region at the moment. The combination of slopes, old vines, dry farming and Carignan (among other varieties) is unique in South America, but until very recently the region was dismissed as a source of bulk wines.

Historically, Maule’s problem was its dependence on País, generally a poor quality grape, and its isolation from Santiago. But after an earthquake in 1939, Carignan was planted to help the area recover, adding much needed acidity, concentration and flavour to bland País. As Derek Mossmann points out, the decision “sowed the plantings of today’s renaissance 70 years later”.

In truth, Maule’s renaissance is less than a decade old. It was initially driven by foreign companies, such as Kendall Jackson, O Fournier and Torres, tempted by cheaper land prices and those old vines, but has now been embraced by Chilean wineries too. “The large wineries are coming to Maule,” says Fournier.

It is significant that the dozen members of VIGNO include the likes of Torres, De Martino, Undurraga, Valdivieso and Morandé as well as smaller players (Meli, Odjfell, Garage Wines, Gillmore, Viña Roja and Bravado Wines) and the impressive local cooperative, Lomas de Cauquenes.

Mossmann claims that the group’s wines are part of Chile’s “first real appellation, in the sense that the regulations are so detailed”: the vines have to be unirrigated and at least 35 years’ old and the resulting wines must contain at least 65% Carignan.

“The techniques of ploughing and dry farming have been passed down from father to son for almost 400 years,” he adds. “The vines are a kind of living museum of a foundational piece of Chilean viticulture. They are a piece of Chilean patrimony.” Whisper it in Santiago, but Carignan is a better grape than Carmenere, Chile’s USP, and is a better story too. Old is the new new in Maule.