“…and cool wine, fitting glove-like over those finer nerves that seem to tremble from the roof of my mouth and make it spread (as I drink) into a domed cavern, green with vine leaves, musk-scented, purple with grapes. Now I can look steadily into the mill-race that foams beneath.

Just behind my shoulder-blades some dry thing, wide-eyed, gently closes, gradually lulls itself to sleep. This is rapture; this is relief.” 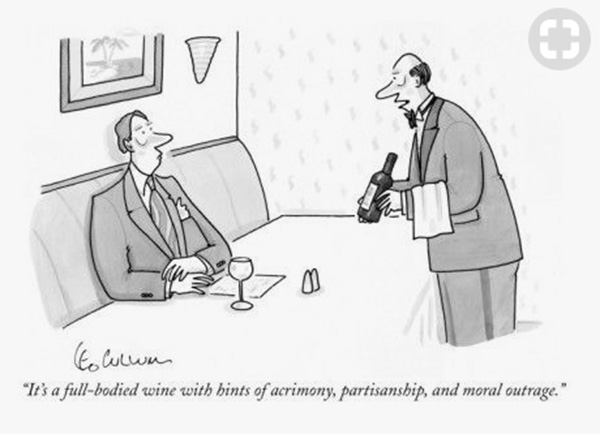 “So, what you really want is the Ukippy reaction to blue wine?” The BBC researcher laughs uneasily. Earlier this year, the audacious marketing of Gik ‘Blue Wine’ had hooked the media. The BBC had lined up one of the founders of Gik for an interview, and they had asked for a Master of Wine to join with an ‘expert’ perspective.

Look, I had just told him. This isn’t something I would drink, apart from out of professional curiosity. But it’s not aimed at me. It’s not even aimed at wine drinkers. It’s part of a trend: drinks manufacturers are playing with wine to make sweet, fruity, lower-alcohol drinks to be guzzled long and cold and carefree. Echo Falls have that new range for fruit flavoured wines. Barefoot have those ready-spritzers in cans. These are just the slicker descendants of Sangria. If the product is safe, and responsibly marketed, and if that’s how some folk want to get merry and lubricate their party, fine by me.

Ah, he had said, we really needed a more opposing view.

I suggested he try Berry’s. I don’t know whether he found someone in time. But even from my own Facebook feed I could see that there were lashings of outrage in the wine community.

The affront over Gik intrigued me. Is this product an attack on wine? The Spanish authorities thought so, arguing that the blue colour took it outside wine regulations. The producers stressed the natural source of their pigment, attacked the closed minded and reactionary wine trade, tweaked their labelling, and achieved even more publicity, and sales.

Currently there are 12,000 #bluewine Instagram posts. Most of the photos feature drinkers looking much better in their swimwear than would (imagine if you dare) the usual crowd at a trade tasting. A Blue Prosecco has recently launched in Germany, and has been featured in Elle, and Marie Claire. Young adults want to play and – yes – get pissed*, and they have decided that wine belongs in the drinking toy box, not on a pedestal. Just google #Frosé and #Wineslushie (and yes, I have made both). Let them drink blue, if they want to. 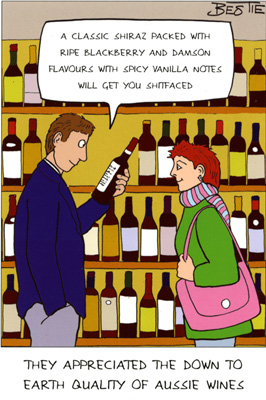 If blue is frivolous, orange is resolute. I was gripped by Simon Woolf’s articles on his blog, The Morning Claret, about his exchanges with the venerable Hugh Johnson on Orange Wine. Woolf is a passionate authority on these skin-fermented wines from white grapes. I discovered them, and came to love them, in Georgia, where they are an old tradition come full circle. Orange Wines are now made across the world. They are strange and demanding, and the antithesis of Gik-ish contrivance. Like the fifth element they can be (as a non-wine-geek friend said) “a bit head-fucky” on first encounter. They grip like a red, enliven like a white, and have exotic aromatics of quince, dried herbs, nuts. Orange Wines have also captured the imagination of a younger crowd. But these are not the bling party-goers (although I have seen some look good in their underwear.) Orange Wines attract those looking for deeper meaning, and authenticity, and their fans tolerate and prize authorial eccentricity.

Johnson, probably our greatest living wine writer, had questioned the validity of the style, calling the wines a ‘side show’.

To their credit, Woolf and Johnson (arbitrated by MW Justin Howard Sneyd) met to taste a range of Woolf’s beloved orange wine. You can read Woolf’s accounts of the courteous sounding encounter here. But a tangerine conversion it was not.

One of Johnson’s beefs with Orange Wine was that he equated it with Natural Wine. And with an extreme concept of Natural Wine as dogmatically (even ideologically) non-interventionist winemaking that tolerates and celebrates faults, and willfully spurns decades of technical progress and control. As Woolf points out, Orange Wine does not equal Natural Wine, nor vice versa, although each can be the other. At least Orange Wine, as the outcome of a production process, is definable. Understanding of the diffuse philosophies and aims behind Natural Wine is only now coalescing.

You can see the Natural Wine movement on the arc of the concerted and long argument against the industrialised wine production of the post-war years. I first understood it, vividly, in 2002 at a visit to Vieux Château Certan, where Alexandre Thienpont (no tree-hugging hippy) was passionately animated with us about the need to stop and repair the damage done to soil vitality by decades of agrochemical treatments in Bordeaux. The concern for environment is driven by self-interest as much as by ideology. Nothing pointless about protecting the source of your livelihood. Deepening green has spread through wine, in the form of integrated viticulture, biodiversity auditing, and organic and biodynamic production.

Consumers are ravenous for trust and transparency in their food and drink. This is bigger than wine. The success of wine fairs Raw and Real have vindicated the vision of their respective founders (and erstwhile collaborators) Isabelle Legeron MW and Doug Wregg (who were initially subjected to the sort of Daily Mail vs Prince Charles ridicule that I remember from the 1980s). These buzzy, exciting, joyous wine and food fairs are packed with (relatively) young people. I chatted with a few. They were mindful drinkers aiming for Virginia’s cave of meaning, rather Gik’s blue haze. They cared about wellness, authenticity, and the meaning they could find in a bottle or a mouthful. The wines were staggeringly varied. And they (and I) were cool with that.

Wine makers eschewing or minimizing inputs are generally not grunting around with a cudgel. They are responding – more by resonance than design –  to this thirst for trust and meaning. It will be fascinating to see what they discover is possible when it comes to reducing inputs with producing top quality wine. I have never met a biodynamic winemaker who believed in Steiner’s full ‘anthroposophy’ belief system (which in parts is bonkers, and racist), but they have each found value in his thoughts on sustainable plant and soil health, and plucked those for their purposes.

We respond to wine with our minds, lusts, and lives. Let the drinkers decide what it means to them, and what they need it to be. Maybe then we’ll see an end to the ‘wine wanker’ jokes.