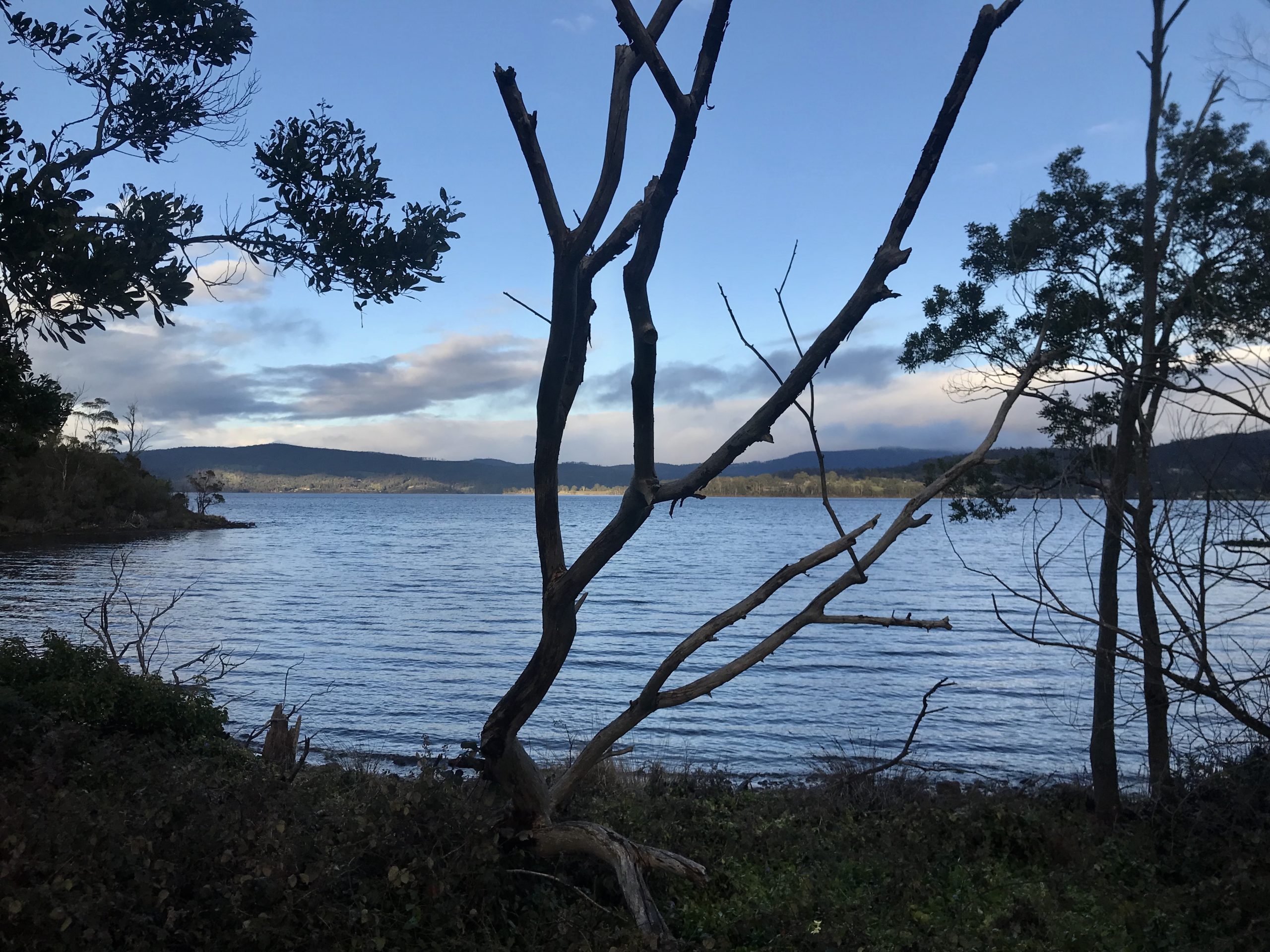 As the tragedy of Australia’s 2019/20 bushfires continues to unfold, the most significant impact on the wine industry has been tragedy in the Adelaide Hills. So far, Tasmania has largely escaped, but there are fires in the north of the island, near Mangana. There remains the risk of smoke taint from fires here,and on the mainland.

Tasmania is the wild and largely unpopulated southern corner of Australia. Simultaneously lushly green and wind-blown desert, mountainous, forested and meadowed, it is an exquisite natural environment. An island with chains of islands, which rejoices in its freshness of nature, fishing, food, culture, and thriving art scene. But does Tasmania offer a glimpse of the future for Australian wine, or even wine in general?

“In the last 10 years the bar of Tasmanian grape growing and winemaking has risen so much, then the next ten years have even more to offer. And you can’t divorce the image of the State from the wine. I’ve never met anyone who had anything other than goodwill toward Tasmania.” Will Adkins, Tamar Ridge

Tasmania’s wine industry confounds the stereotypes. Accounting for less than 1% of Australia’s wine, but nearer 7% of its value, it is obvious that the island outperforms in quality terms.

Famous historically for its sparkling wines, which still account for just over a third of the production, and definitely include the best in Australia, nowadays there is excitement leaning just as much towards still Pinot Noir and Chardonnay. There is also potential for other aromatic grape varieties like Pinot Gris and Riesling. Perhaps unsurprisingly, Sauvignon Blanc accounts for twice as much vineyard as Riesling and is the third most planted variety after Pinot Noir and Chardonnay.

Only about 60% of the wine produced leaves the island, and less than 15% is exported, so these wines are of necessity difficult to find. All of them sell for more than $15 in Australia (which contrasts with just 7% of the country’s whole production).

Can this premium niche last, especially as more people plant on the island?

The perception is that Tasmania is a cold wet place. But this is not true. Certainly, just as with New Zealand’s South Island – and for the same reasons – the western half of the island is cool and lushly forested with high rainfall. But the far eastern coast, as Will Adkins of Tamar Ridge and Devil’s Corner pointed out, regularly experiences drought, and almost all the island’s vineyards need irrigation. The vineyard areas run north to south along the spine of the island and its eastern coast. Between the Southern vineyards of the Derwent and Coal River Valleys and the northern Tamar Valley there is a latitude given difference of length of growing season and temperature. Tasmania experiences fairly reliable warm autumn weather in the lead up to harvest in March. This is a cool climate grape growing area – cold by Australian standards – but by no means as extreme as the perception abroad. As Sam Connew, the charismatic winemaker of Stargazer pointed out “Hobart is the driest state Capital in Australia.”

This gives rise to the question of whether Tasmania is somehow climate change-proof. If the island’s climate warms, and it is doing so, then there will be greater opportunity for ripeness, and perhaps better potential for varieties like Syrah. As Dr. Andrew Pirie, the founder of Pipers’ Brook, and the doyen of Tasmanian wine commented: “Within 20 years at the warmer end we will have Syrah and Tempranillo firmly established.”

The risk is that the Tasmanian hallmark of precise acidity and freshness may be diminished, particularly in its leading Pinot Noir and Chardonnay. Certainly its sparkling wines might risk losing the quality edge that the long growing season gives. However, there are many vineyards, and perhaps whole regions, yet to be discovered. According to Luke Whittle the Chief Winemaker for Piper’s Brook: “A lot of the really premium sites in Tasmania probably haven’t been planted yet.”

However, it is changing patterns of rainfall that probably constitute the greatest risk, with extremes causing frost at one end of the growing season and drought at the other, and rain falling in increasingly unpredictable patterns. There is not a vast amount of organic viticulture in Tasmania, because of the humidity-born risks of disease, and this situation does not appear likely to change in future. There are exceptions, such as Nav Singh and Louise Radman’s Domaine Simha, which follows biodynamic principles and employs only minimal sulfur in the production. Their micro-batch wines are excellent, but come at a price as a result. Which is scarcely surprising for someone who has made wine at Le Pin and Domaine d’Arlot. Stefano Lubiano farms biodynamically in Coal River, but his sought-after wines are not exported.

Tasmania is phylloxera-free and the vast majority of its vineyards are on their own roots. Because the island has fewer than 1600 hectares under vine, which are generally not contiguous, if or when phylloxera does arrive, then it would surely be slow to spread and may be containable, but it remains a risk. This may be exacerbated as more producers continue to plant.

It has never been easy to make money from wine in Tasmania, and the stories of many of its wine producers are littered with bankruptcies and takeovers. For example, the convivial entrepreneur Josef Chromy, whose money came from the Tasmanian meat industry, has previously owned Bay of Fires, Jansz and Tamar Ridge. He sold the latter in 2003 to begin producing award-winning wines under his own name.

With such enormous potential, it is no surprise that large companies, such as multi-national Accolade, the owner of the brands Bay of Fires and sparkling wine producer-extraordinaire House of Arras, are already well established. Indeed Ed Carr from Arras is the most highly awarded sparkling winemaker in Australia. Penfold’s finest white wine, Yattarna, is routinely made largely from Tasmanian Chardonnay. It has recently been announced that Western Australia’s Fogarty Wine Group (the owners of Deep Woods, and Lake’s Folly among others) are to become Tasmania’s second biggest vineyard owner with over 200ha of new plantings. Family companies like Yalumba (owner of Jansz and Dalrymple), Brown Brothers (Tamar Ridge) and Shaw and Smith (Tolpuddle) have also seen the potential for the cooler climate of Tasmania. Michael Hill-Smith commented “Tasmania could double production without causing oversupply issues”

The risk here is that very large companies with money to invest may dilute the Tasmanian proposition and lower the selling prices via achieving economies of scale. As Penny Jones, from Bay of Fires, said “with the increased grapevine plantings happening at the moment, grape prices will fall, and there will be much more fruit on the market. We need to be careful to not just maintain wine quality in the face of this, but also grow it. We need to maintain focus on the premium end of the market.’

As discovery and exploration of various growing areas, the push for new GIs (Geographical Indications) will become ever more irresistible. In fact, only two regions would qualify under the current rules, but the majority of producers seem of the opinion that keeping the existing single GI of Tasmania is best. This allows for blending across regions, which will be especially of value for sparkling wines should the climate shift considerably. Further, it reinforces the proposition of the island as a whole, capitalising on its well-deserved reputation for purity, nature, food and tourism.

Despite its first wines having been made in the nineteenth century, with a gap until the 1950s, the Tasmanian wine industry is very young, even by Australian standards. As Carlos Souris, the vineyard manager for Tolpuddle said “Tasmania’s viticultural future is in its infancy.” It is, without doubt, Australia’s most exciting and dynamic wine region.

Very fine Pinot Noir and Chardonnay made by Sam Connew from 5ha in the Coal River Valley.

Available in the UK through Enotria & Coe https://www.enotriacoe.com

Next door to, and owned by, David Walsh, the founder of Hobart’s extraordinary MONA (Museum of Old and New Art). A very wide range of wines crafted by Conor van der Reest. Three ranges, with the beautifully labelled Muse series offering the best value.

Available in the UK through Thos Peatling  http://www.thospeatling.com

Some stock available in UK Independents

Named after one of the not-actually-martyred Tolpuddle Martyrs, who ended up farming this land north of Hobart following his deportation. Planted by Dr Tony Jordan, and now owned by South Australia’s Shaw and Smith, these relatively old vines are making a Pinot Noir and Chardonnay of rare precision and class.

Available in the UK in various independents, imported by Liberty Wine https://www.libertywines.co.uk

From a bucolic vineyard south of Launceston, with a very fine restaurant, the range from Josef Chromy, masterfully made by Jeremy Dineen features great sparkling, exceptional Riesling, Pinot Noir and Chardonnay.

Available in the UK in various independents, imported by Bibendum

Long established in the UK, and now owned by Robert Hill-Smith of Yalumba, these wines show among the best still wines of the Pipers River, especially the beguiling and Burgundy-like Pinot Noir.

Available in the UK in various independents, imported by Fells. https://fells.co.uk

Originally set up (as Heemskerk) by Graham Wiltshire in conjunction with Champagne Roederer, this was the original Tasmanian super-sparkling wine, and it remains that way.

Available in the UK in various independents, imported by Fells: https://fells.co.uk

Just north of Launceston, Tamar Ridge is a pioneer of Pinot Noir, and one of the largest vineyard holders in the island. Now owned by Brown Brothers and having benefited from a great deal of recent investment. The Devil’s Corner range from the east coast offers great value.

Available in the UK in various independents, imported by ABS

Spectacular range of sparkling wines made mainly from a single site in Pipers River. Established by brothers Bernard and Dominique Portet of Clos du Val in Napa and Taltarni in Victoria respectively. Everything is modelled on Champagne, from planting to disgorging, and it shows.

Originally established by Andrew Pirie, and for many in export markets the first encountered Tasmanian wine, following numerous changes of ownership, and in the deft hands of chief winemaker Luke Whittle, this range is back on form again.

Available in the UK in various independents, imported by Buckingham Schenk

Bay of Fires / House of Arras

Now owned by Accolade wines – the wine behemoth that was born from BRL Hardy and Constellation brands, these two brands show that large companies can sometimes just add investment to recipes that work. Penny Jones’ Bay of Fires Pinot Noir is especially good value, and maestro Ed Carr’s Arras Sparkling wines are among the island’s very best and most awarded.

Available in the UK in various independents, imported by Accolade Wines. http://www.accoladewines.com