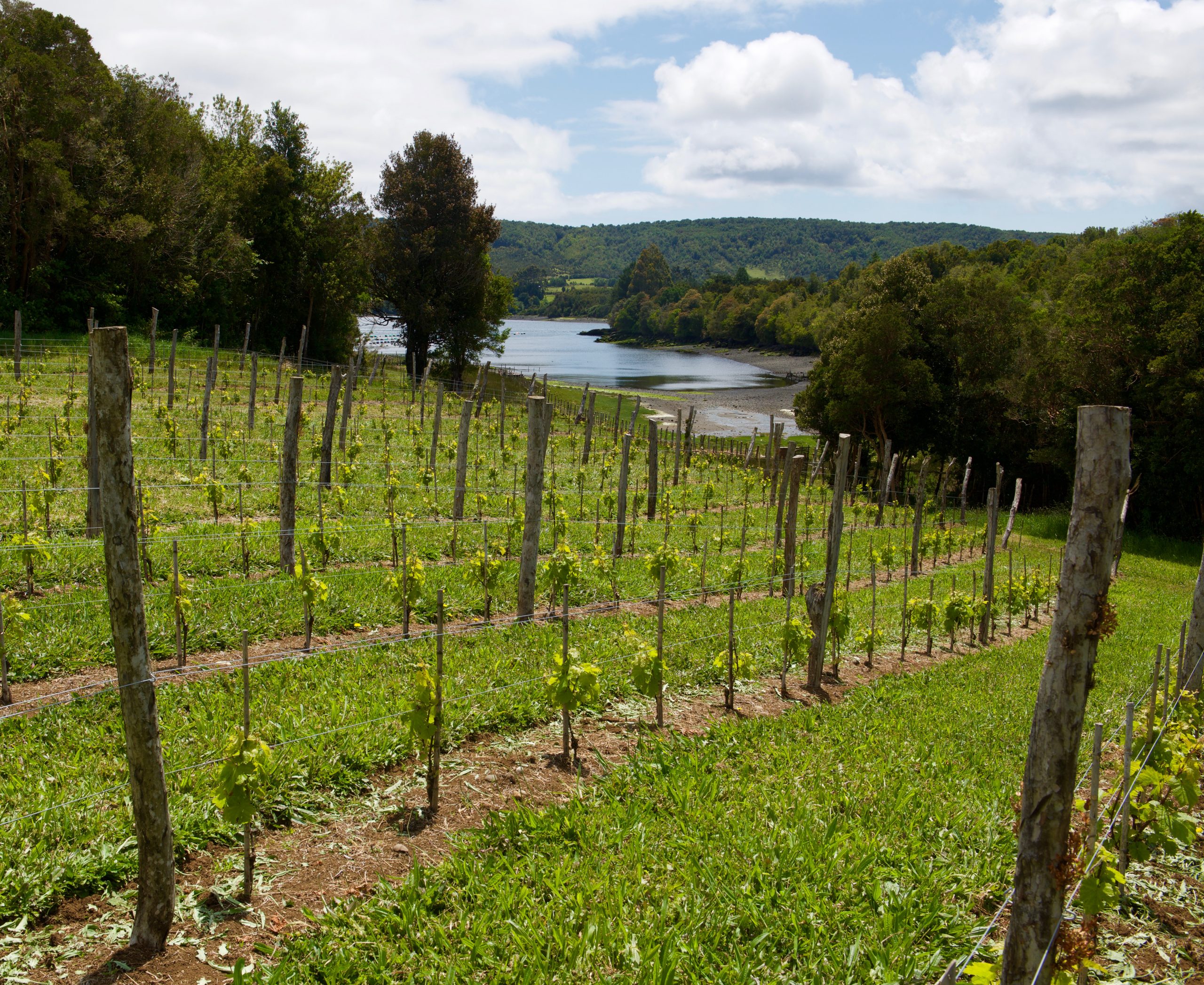 The life jacket seemed like a good idea, given the size of the launch and the strength of the wind barreling down the jetty. Nervously, I climbed on board and prepared for the final leg a journey that had started over 1,000 kilometres away in Santiago with a flight to Puerto Montt. From there, I’d taken a ferry to the Isla Grande de Chiloé and driven to Quicavi on its eastern coast. Now it was time to visit the tiny island of Añihué, home to one of the remotest and most unusual vineyards in the world.

The archipelago of Chiloé is better known for seafood, mythology and potatoes than it is for wine, but that might be about to change in the next couple of years, thanks to Viña Montes’ daring two-hectare plantings of Albariño, Chardonnay, Gewürztraminer, Pinot Gris, Pinot Noir, Riesling and Sauvignon Blanc. At 42.6°S of latitude, this part of southern Chile was traditionally considered too cold and especially too wet to grow grapes, but as the climate hots up, here as elsewhere, the past is an unreliable guide to the future.

The project began with a conversation between Aurelio Montes Senior and the climatologist Professor Fernando Santibáñez of the Universidad de Chile. Montes knew Chiloé from sailing, flying and walking holidays and was convinced that it could grow grapes. Santibáñez set to work and found what he thought was an ideal spot. All the Montes family had to do was persuade Don Carmelo de la Cruz, an 82-year-old retired fisherman, farmer and postman who has spent most of his life on the island, to let them use his land to give it a try.

The key to Añihué, or at least to the part of it where the vineyard is located, is that it’s more sheltered, warmer and a lot drier than the western side of the archipelago, where 3,000mm of annual rainfall is common. Añihué gets only half of that, making viticulture without supplementary irrigation possible. And the cold? Well, the thermometer in the vineyard hit 34°C in February 2019, a record for the island, according to viticulturist Rodrigo Barría.

In a country that’s currently experiencing one of its worst-ever droughts, especially in the classic growing areas close to Santiago, the longer term potential of southern areas like Lago Ranco, Osorno and now Añihué is considerable. There’s no denying that this is an extreme site – “super Outer Limits”, as Aurelio Montes Junior puts it, referencing the brand name under which, all being well, the first wines will appear some time in 2021 – but the vineyard appears to be prospering. Facing north and on a slope that mitigates frost risk, it could prove to be one of the most exciting new sites in the southern hemisphere.

Montes’ vineyard is not the mostly southerly in Chile – that distinction still belongs to the project run by the Instituto de Investigaciones Agropecuarias (INIA) in Chile Chico at 46.32°S – but it’s set to be something much more important than an academic outpost. It does hold one record, however. The sea laps to within 50 metres of the bottom of the vineyard, so this is the closest site to the Pacific in Chile, beating another Montes vineyard owned by grape grower Eduardo Ferández in Leyda, which is 1.5 kilometres from the waves.

Which variety will do best on these volcanic soils? Montes are spreading their bets – who fancies a punt on ocean-loving Albariño? – but the grapes that have done best in the south to date are Chardonnay, Riesling and Pinot Noir.  It’s also possible, of course, that none of them will work, although I doubt it. The site just feels right in that way that great vineyards often do. Alcohuaz, another extreme project at 2,000 metres in the Andes, displays a similar self-confidence.

Whatever Viña Montes produces here, it’s going to be a schlep to get it off the island. Just as everything in the vineyard had to arrive by boat and wheelbarrow, so everything that leaves it will depart by sea, crossing the same rough stretch of water that I bumped across in a launch. Chile has changed beyond recognition since I accused it of being the Volvo of the wine world back in 2002. Thanks to project like the one in Chiloé, it is now a place that’s defiantly pushing boundaries. Or Outer Limits if you prefer.