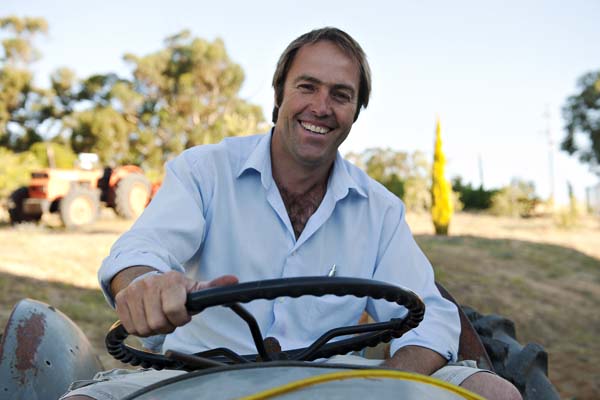 “A vineyard planted at the gates of hell”, doesn’t sound like the most promising source of fine wine. You’d expect it to make a pruney, full-bodied red or a fiery fortified at best. But the 1.4 hectares of field-blended Semillon Blanc, Semillon Gris, Muscat and Palomino that grower Dirk Brand cultivates on his wheat and rooibos tea farm near Elands Bay on South Africa’s West Coast produces one of the Cape’s most refined and minerally whites instead.

The reason for the paradox is easy to explain, according to the viticultural consultant Rosa Kruger: unirrigated old vines. “It’s one of the most extreme vineyards I’ve ever seen,” she says, “but it seems to have the ability to override the stresses of the climate.” The result is Eben Sadie’s ‘T Voetpad (The Footpath in Dutch), one of a number of Cape wines sourced from venerable, yet previously ignored vineyards, many of them rediscovered by Kruger.

This bright, engaging woman is better known in South African winemaking circles, where the younger guard (Eben Sadie, Chris Alheit, Donovan Rall, Chris and Andrea Mullineux among others) speak of her with veneration as a curator of the Cape’s viticultural past, but she’s beginning to develop a following elsewhere, too. She was the star turn at the Old Vines seminar held as part of the Institute of Masters of Wine recent 60th Anniversary celebrations, talking with conviction and passion about her life’s work.

Part of T’Voetpad was planted as long ago as 1887 (even phylloxera doesn’t relish a trip to the gates of hell, apparently) and survives on its own roots. This makes it one of the oldest vineyards in the Cape, but a comparative youngster when set alongside a plot of 1865 Amador County Zinfandel, 1847 Barossa Valley Shiraz or, the wine world’s senior citizen, the celebrated 17th century Zametovka vine in Maribor, Slovenia.

How extensive are plantings of old vines around the globe? No one really knows. Part of the problem is that there is no legal definition of old age. Terms like vieilles vignes, Alte Reben and viñas viejas can be applied by wineries without fear of contradiction. In unscrupulous hands, the term means as much (or as little) as Réserve Personnelle, Wild Yeast Fermented or “natural” wine.

Yalumba in the Barossa Valley tried to categorise its Barossa Valley vineyards a few years ago using an Old Vine Charter, a scale that has been widely praised and adopted in Australia. Its categories, based on human generations, are as follows: old vines (over 35 years), antique or survivor (over 70 years), centenarian (over 100) and ancestor (over 125 years). Sadly, this doesn’t seem to have caught on elsewhere, which leaves the term open to misinterpretation and abuse.

What is clear is that old vines are something of an endangered species. It’s not just that phylloxera (and the need to graft Vitis vinifera vines on to American rootstocks) has shortened the lifespan of many vineyards. It’s also a question of economics. Older vineyards produce lower yields and, unless they can get a good price for their grapes by way of compensation, growers and producers tend to be influenced by the bottom line.

That’s why vine pull schemes over the last 30 years in countries as varied as Argentina, France, Spain, South Africa, Chile, Greece and the United States have lead to the loss of so many ancient vineyards. As Norrel Robertson MW, another member of the Old Vine panel pointed out, the reduction in the size of Spain’s plantings of Garnacha, one of its three best red grapes and the one with the highest percentage of old vines, over the last 30 years has been a tragedy, with over 100,000ha lost to bulldozers.

It’s important not to overstate the contribution that old vines make to wine quality. As the Yalumba charter puts it: “Whilst vine age may often be used as an indicator of potential quality, it is not a prerequisite, just as variety, region or maker do not, by themselves, create a superior wine.” Some old vines, in other words, are best suited to a crackling bonfire.

And yet it’s widely accepted among grape growers that vines start to produce their best and most balanced fruit after a minimum of ten years. I’ve tasted some incredible wines made from three or four-year-old vineyards, but these are the exception rather than the rule. It takes time for a vine to adapt to its environment and (with judicious or no irrigation) develop its root systems. Old vines, according to Rosa Kruger, seem to conserve their resources more adroitly, resist diseases better and produce more nuanced aromas and flavours. They also, as Mark de Vere MW added, speak of “place, not variety”.

The preservation of old vines (and to me, they really start at 50 years’ old, not thirty-five) is an urgent matter. Urban sprawl, pressure on growers and wineries to hit price points, as well as declining consumption in many traditional wine-producing countries, are threatening the existence of many ancient vineyards. We’ve lost way too many of these in the last 50 years. Now, it’s time to protect and nurture what remains before it’s too late.