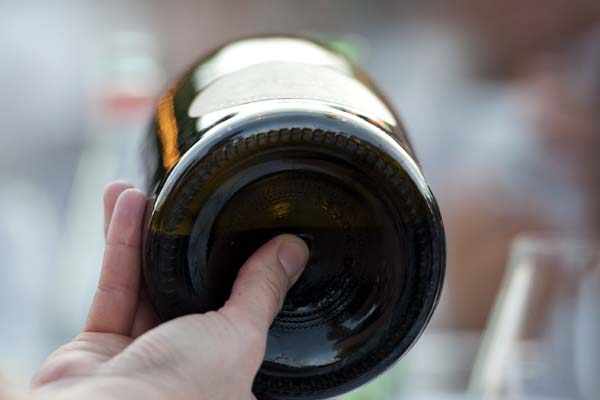 Hello, you’ve probably heard of me. My name is Larry Anosmia, and I’m the best Master Sommelier in America. Yes, that Larry Anosmia, star of the Food Channel’s hit television show, “Number One Chef, But the Sommelier is a Big Number Two.” I know you won’t want to miss this season’s finale when special guest star Anthony Bourdain challenges me to a blind tasting of Picpoul de Pinet, but I cheat and slip him a glass of bull semen instead. He loves the minerality, and charges a nearby tablecloth. But that’s not why I’m writing. I’m writing to ask for your help with a very worthy cause that doesn’t get the attention it deserves. And tell you a little bit about what we’re doing to help. I think, once you’ve read this letter, you’ll want to help, too.

Our sommeliers are dying. Scientists haven’t discovered why just yet, though most of the evidence points to the size of their heads being the most important factor. In the late stages of the mysterious disease, most are unable to remove their tastevins over their heads. They are horribly disfigured, mistaken for Macy’s Thanksgiving Day balloons, or, worse yet, a publisher of an American wine magazine. Ask yourself, when is the last time you’ve seen one of our vanishing sommeliers in their native habitat? Most are too ashamed to actually be on the floor of a restaurant. Many of our sommeliers have heads so big they’ve started their own wine labels! Yes, I know, it’s shocking, even terrifying. Worse yet, there seems to be no end in sight. There is no cure, and most sommeliers go on to a painful death, or worse, a job buying wine for Macaroni Grill. How much longer can you let this happen without wanting to help?

Worst of all, most of the dying sommeliers will never know another day of joy. They have put years of insobriety and hubris into their careers, dedicated their lives to the glories of alcohol when they could have selfishly become teachers or nurses or firefighters. Most worked tirelessly to promote the occupation of sommelier, and their success is measured by the thousands of people wandering wine country and applying for jobs with fake business cards and phony credentials obtained from wine “schools” that proclaim them “Sommelier.” Everyone, it seems, is a sommelier, whether they’ve actually worked the job or not. And it’s those phonies who will be all we are left with when the real sommeliers are dead. Even now, our finest wine experts are nearly extinct in restaurants, replaced with these pretenders. And our once great wine lists, the envy of every civilized nation, are now no more than Encyclopedias of Ego, Wine Wikipedias of Wankers. But that’s a cause for another day.

I’m writing on behalf of the Sommeliers’ Last Wish Foundation. It is our cause, our passion, our purpose, to grant the final hopes and dreams of our dying sommeliers. We think they deserve no less. The SLWF has already granted the Last Wishes of many sommeliers. I’d like to share a couple of examples with you.

Corky Phee MS was the legendary sommelier at the great Vietnamese restaurant, Slanted Dork. Phee is perhaps most famous for compiling a list of virtually undrinkable skin contact white wines to go with Slanted Dork’s Vietnamese cuisine—his signature Agent Orange wines. As he lay dying, his head swollen to the size of a medium-toast Francois Freres Limousin barrel, his mouth a parody of a bunghole, Phee asked for one simple thing. Corky wanted to meet his hero, Robert Parker. The SLWF contacted the Messiah of Monkton and told him of Corky’s fatal illness, and of his desire to meet the great man himself. What happened next was a miracle. OK, we didn’t hear back, but Bob did give Corky a shout-out on his eBob chat room board with a post titled, “Waving Goodbye to Corky Phee.” Though that may have been misspelled. Corky died not long after, quite peacefully, in his sleep, not like the other people in his car.

Sommelier Tess D’Vonn MS worked for years on the floor at Coq au Cola. When she finished the floor, she worked on the plumbing. Tess won every major sommelier award. She was Sommelier of the Year six times. And that was in 1995 alone. Her Coq au Cola wine list earned not only the “Wine Spectator” Grand Award, but also the coveted “Wine Enthusiast” We Kinda Know Most of Those Wines Award. Her wine list once prompted Andrew Jefford to say, “It looks like José Vouillamoz threw up on it.” Her last few weeks, when Tess’ Barry Bonds cap finally fit, she had one last request. She wanted to drink Screaming Eagle from her birth year — 1965. Quickly, the volunteers at SLWF contacted Acker Merrill and they were able to find a bottle of ’65 Screaming Eagle sourced directly from the cellar of celebrity wine swindler Rudy Kurniawan. Unfortunately, the wine sold to the owners of Slanted Dork for more money than was available to the SLWF. A last minute plea to donors yielded only a 2-for-1 tasting coupon at Freemark Abbey, and a $15 voucher for Lot18. The ’65 Screaming Eagle is currently on the Slanted Dork Reserve Wine List in the “You Won’t Know They’re Fraudulent!” category. Sympathetic volunteers at the Sommelier Hospice served Tess a glass of ’65 Joseph Phelps Insignia instead, which she declared, “Reminiscent of a young Mouton Cadet.”

If only you’d known then what you know now, your contribution could have helped with the purchase of the ’65 Screaming Eagle for Tess. Imagine the glint in the dying sommelier’s eyes as she raised it to her lips, lips every winemaker wanted to pass through, Gatekeeper lips! Sommeliers are our industry’s most important Gatekeepers. Just ask them.

There are dozens more sommeliers just like Corky Phee MS and Tess D’Vonn MS. And they need your help. As our treasured sommeliers die, as one by one they begin to believe their own press and their heads begin to swell, and the dreaded, highly contagious, unknown disease takes its fatal grip, it’s only right that we grant them final wishes. We are talking about our beloved sommeliers, after all. Men and women who have given so little, yet asked so much. Won’t you think about a generous donation?

This is Larry Anosmia MS. I know you’ll want to give so that the next time you’re in your favorite restaurant, and you see the sommelier approaching your table, you’ll be able to feel the absolute joy of knowing you’ve contributed to his happy demise.