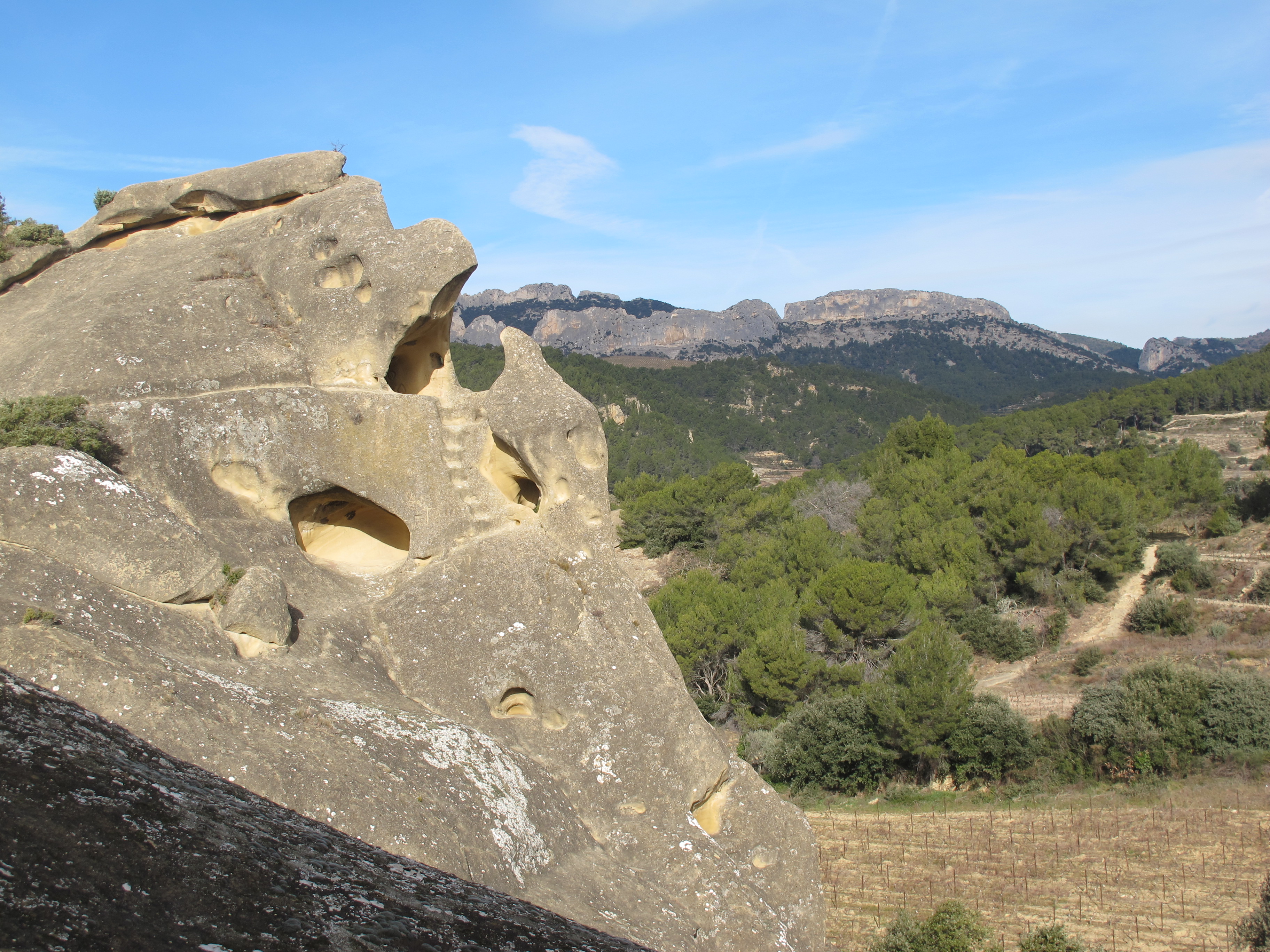 Catherine, Duchess of Cambridge – and her sister, Pippa. Andy Murray – and his brother, Jamie. Beyoncé Knowles – and her sister, Solange. Having a more famous brother or sister can be a mixed blessing. On the one hand, it brings the benefits and opportunities of a star-studded surname. On the other, cynics may doubt the depth of your talents and it’s hard to escape the shadow of your sibling. So it is with Beaumes de Venise. Most wine lovers have heard of their sweet Muscats: not so many their reds. But they deserve a share of the limelight and there’s one estate in particular with an undeniable star quality.

One of the most beautiful places to make wine in the Southern Rhône is around the Dentelles de Montmirail, a high limestone outcrop topped with rows of jagged grey teeth not far from Mont Ventoux. Skirting around its base, you’ll find pretty Gigondas to its northwest and Vacqueyras to its southwest. Keep following it round to its most southerly point and you’ll find the village of Beaumes de Venise. With such celebrated reds being made nearby, you have to ask – what’s with all the Muscat?

Sheltered from the rampant north wind, Beaumes de Venise has a particularly hot microclimate – and Muscat loves the heat. It’s also particularly at home in the deep sandy soils near the village. (Surrounding hills are made from this compacted sand, it’s so soft you can find little grottos carved out of them – the name Beaumes comes from balma, the Provençale word for cave). It’s the perfect terroir for making sweet Muscat, a style that was once celebrated, but has since fallen out of fashion.

But most of the red grapes aren’t grown here. They’re planted higher up in the hills amongst dense woodland, in cooler sites, on different soils. At its highest point it shares a border with AOC Gigondas. Stylistically, however, the reds aren’t as polished and pure; they’re more like a musclebound Vacqueyras in need of a shave.

Beaumes de Venise Rouge can be gruffly tannic, deeply concentrated and potently alcoholic. Sometimes it’s all three of these things, but quality, though inconsistent, is climbing. When winemakers find methods of reining it in, the results can be impressive. Domaine de Fenouillet, Ferme Saint Martin, Domaine Martinelle, Domaine Saint Amant and Domaine la Ligière are all making fresh, bright wines without trying to efface its naturally broad frame and rugged character. And one producer in particular is making a wine that deserves wider renown. 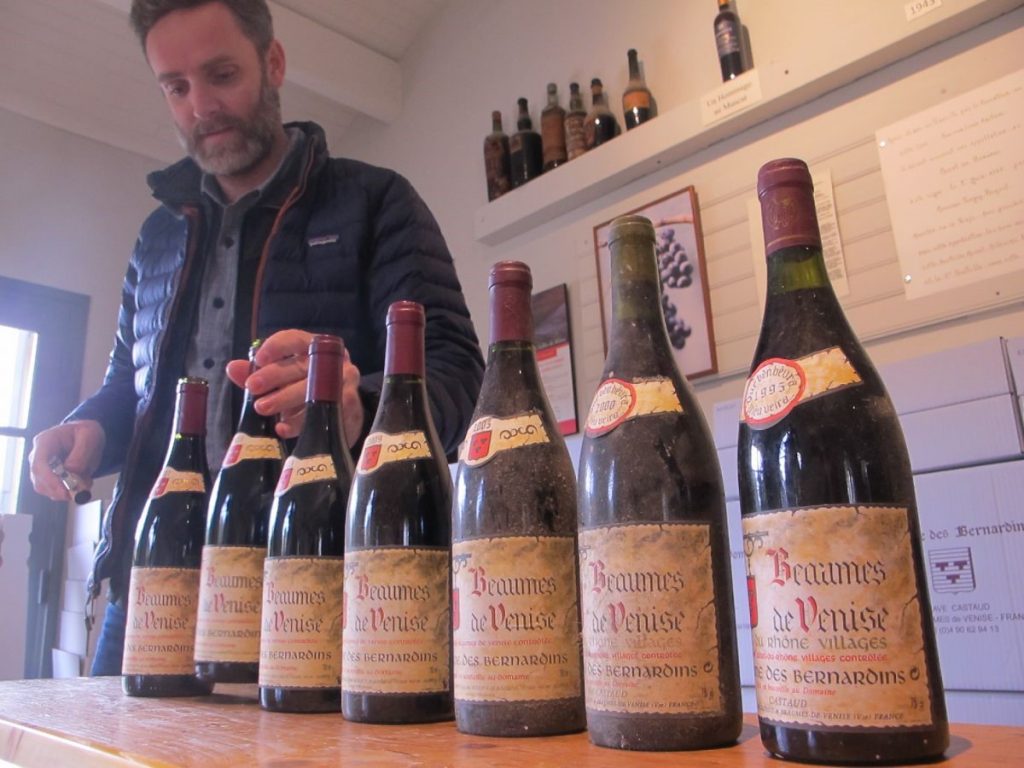 Domaine des Bernardins can trace its roots back to the 1500s. Romain Hall’s family have owned the estate since 1820. Reserved but welcoming, Romain represents the seventh generation making wine here. His great-grandfather Louis Castaud was instrumental in securing the AOC for Muscat de Beaumes de Venise in 1945 – not long after Châteauneuf-du-Pape, the daddy of them all. They’ve long been considered one of the best estates for long-lived sweet Muscat (their 1987 was outrageously good when I visited), but its time they were equally fêted for their red.

Their Beaumes de Venise Rouge is no wallflower but wields its power relatively lightly, with enduring aromas of Provençale herbs and black pepper over vibrant forest berry fruits. What makes it stand out amongst its peers however is twofold; its consistency of style and quality and its ability to age.

Some would describe the style as a little old-fashioned, and it’s fair to say their winemaking isn’t exactly hi-tech. For a start they don’t remove any stems from their red grapes, and this has a conspicuous effect on the style, adding freshness and interest to the texture and aromatics, and helping to moderate alcohol levels. They co-ferment varieties in raw concrete tanks for 15 days, then the wine spends a year in steel tank before release. There’s no oak involved in the process.

Romain is keen to stress that “we don’t seek overmaturity or overextraction, we look for finesse, freshness and acidity.” They have a wealth of old vine material and they pick relatively early. Maceration is gentle – no punching down, just wetting the cap. It all adds up to a restrained and balanced example of what can be a domineering style of wine.

The 2017 and 2015 were as good as their fantastic 2016, three excellent vintages in a similar vein of bright fruit with dried herbs, all subtly different, but equally fresh and balanced. The 2013 doesn’t quite have the fruit to match the stalk influence, but the 2009 and 2005 certainly do, two warm vintages that are still in great shape: the 2009 incredibly youthful still, the 2005 in comfortable maturity, with autumn leaves, liquorice and menthol woven through the deep, rich melted berries. The 2000 is tannic still but in decline, earthy with iron and dried blood. But the 1995 hangs on, with raspberry leaf, dried flowers and sage notes to its remaining dab of strawberry fruit. It still contains some tannic bristle, and approaches the end of its long life with a peppery sigh.

“Muscat is our baby, but we love making reds,” says Romain. Their sales of Muscat are stable, but they’ve doubled production of Beaumes de Venice Rouge in the past 10 years to 25,000 bottles a year. You can pick it up in France for €12.50 (Les Passionnés du Vin), in England for £15.20 (Tanners). It feels distinctly undervalued compared to top Vacqueyras and Gigondas. I wouldn’t expect it to stay this cheap forever.

“It’s hard for consumers to understand that two completely different wines come from the same terroir,” says Romain. But as tastes continue to move away from sweet wines toward dry ones, it’s time for Beaumes de Venise Rouge to step out from behind it’s golden sibling, and to be known for its own considerable gifts.