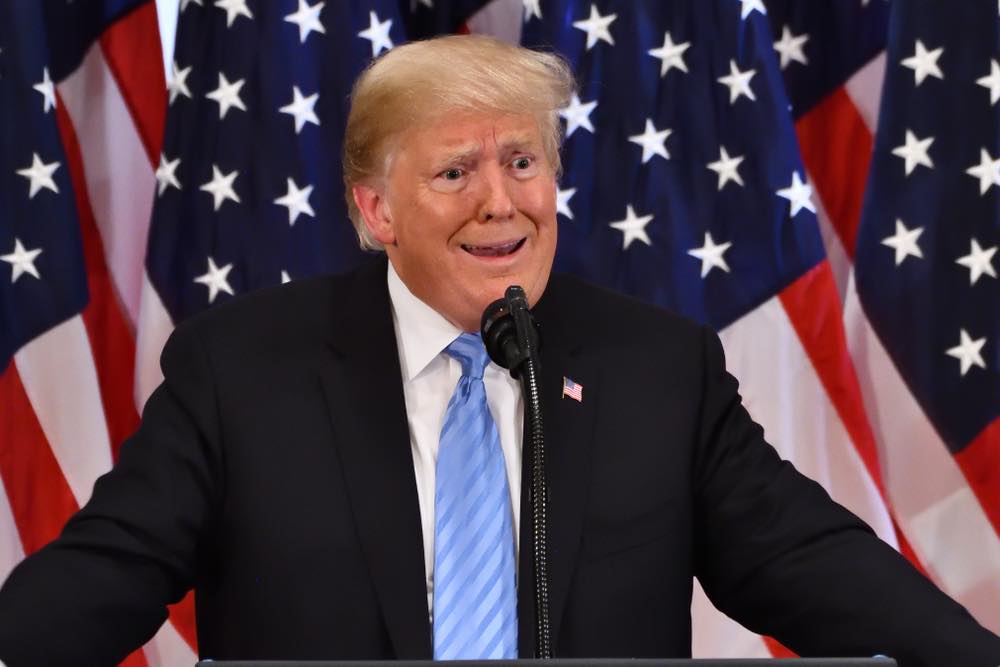 OK, let me just say this. I’m very proud to announce that my Trump 2014 Blanc de Blanc was named the Greatest Sparkling Wine Ever Made by the San Francisco Chronicle Wine Competition. Ever made! That includes Donald Perignon and Vulva Clicquot, a bottle I grabbed last night because I can. This fantastic sparkling wine carries on a proud Trump tradition—it will certainly sell out.

The wine is fantastic. Just fantastic. I’m telling you, folks, it’s the best thing you can put in your mouth outside of Russian hooker urine, speaking of Yellow Label, and it’s twice as fizzy!

The judges at the San Francisco Chronicle Competition will soon be getting Presidential Medals of Freedom. These people, and I mean both men and women—they say women are better tasters than men, but that’s fake news, that’s stupid, everyone knows men have a lot more tastosterone. These fine judges have done so much good for our country, and for our country’s wine industry, that I’m going to give all of them a Presidential Medal of Freedom. I can do that. They give my wine a big medal, I give them a big medal, that’s what I do. I’m a negotiator.

Look, the Trump wine is so good because it’s made from white grapes and only white grapes. It’s the supreme white wine. It’s a Blanc de Blanc, which is French for “vasectomy.” Now, before the Lyin’ Press starts to accuse me of being a white supremacist, let me tell you that those white grapes were picked by the fine people of Mexico. I love the Mexican people. I mean, they invented guacamole, and chihuahuas, and piñatas—what’s not to love about that? Columbus, Christopher Columbus, the man who discovered America, even named one of his ships the Piñata! You can’t get better than that, folks.

And I love that the Mexicans are going to pay for the Wall. The Mexicans want the Wall more than I do! That’s right. They do. And you know why they want the Wall? Graffiti. Mexicans love graffiti. They really do. I’m going to build them a beautiful Wall, and they’re going to paint murals all over it, like that San Diego Riviera guy. It will be beautiful. Beautiful.

Now, there’s been a lot of fake news out there that the Trump Blanc de Blanc won because of Russian influence. There’s no collusion, folks, there’s no collusion. My wine won fair and square. The judging was done completely blind. Those fine wine judges had no idea what they were tasting. No idea. That’s not how it works. The judges sit at a table, haven’t the slightest idea what they’re tasting and then they give awards. That’s how wine competitions work. And those judges, those judges who are both men and women, I mean this is the San Francisco competition, so some of them are both men and women, decided the Trump Blanc de Blanc is the Greatest Wine Ever Made. And these aren’t just any judges, these are the people who judge at the San Francisco Chronicle Wine Competition, which is famous all over the world for having judges who haven’t the slightest idea what they’re tasting!

So there’s no collusion. None. No bribes involved, no fake social media influence, no collusion. Listen, they don’t even pay those wine judges at the San Francisco Chronicle Wine Competition. Nothing. I bet you didn’t know that. They pay them nothing. This just shows how smart those judges are. The competition gets $85 for every wine entered. And there’s like 7000 wines entered. Do the math. That’s a cool $600,000. But the judges don’t see a nickel of that. That’s integrity, folks. The judges do it for the prestige, like our fine TSA agents and members of the Coast Guard and air traffic controllers during the latest government shutdown, which the Democrats are responsible for because they won’t give the Mexicans the graffiti wall they want.

It’s simple, folks, I don’t care what business you’re in, the best way to lure the best people is to not pay them. I think the results of the San Francisco Chronicle Wine Competition prove that. Right before I came out here to talk to you, I bespoke with President Putin, who called to congratulate me for having my name on the Greatest Wine Ever Made. It’s about time this country had a good relationship with Russia. Don’t get me wrong, it’s always going to be America First. I make deals, I’m a dealmaker. Six months ago, I even got Putin to pay the $85 entry fee for my sparkling wine. And why not, it was his idea to enter it! Now Putin calls me and says he wants the Trump Blanc de Blanc Best in Show plaque for his wall in the Kremlin. I’m not going to do that. No, I’m going to have a ceremony here at the White House, and I’m going to invite all the volunteers who worked at the wine competition, who worked the sparkling wine part of the competition, to celebrate this great victory for a great American wine. I know that Boris, Sasha, Misha, and Natasha, who were working their first wine competition, their first, how about that!, are very proud that the sparkling wine they served won Best Wine Ever Made. It’s been an amazing few weeks, folks, amazing.

I never thought I’d say this, but thank you to the “San Francisco Chronicle” for sponsoring such a high quality and prestigious wine competition. It’s fantastic what you’re doing out there. Fantastic. Your sponsorship of a wine competition that lets everyday people, people you find outside a Walmart, ordinary Americans, judge wines alongside professional judges is part of what makes America great. A competition that refuses to pay even a single person working it, aside from the organizers, of course, despite raking in $600,000 is my kind of competition! A competition that gives Gold Medals away like the EPA gives away drilling rights on public lands is the kind of competition that makes America great for business. A competition that this great newspaper sponsors, and is willing to sponsor, without any sort of responsible oversight, with no care for its own journalistic integrity, is worthy of FOX News, and I mean that as a great compliment.
Thank you to all the judges, and to the “San Francisco Chronicle.” With your help, we will Make America Greatly Again.