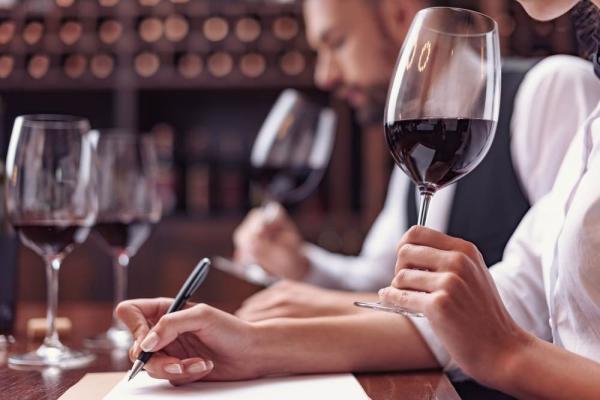 “The Court of Master Sommeliers stripping the titles from 23 of the 24 candidates who took the tainted blind wine tasting exam in order to preserve the Court’s ‘integrity,’” Larry Anosmia MS tells me, “is like Stormy Daniels announcing she’s going to erase her latest film in order to preserve her virginity.”

Larry Anosmia MS passed the exams back in 1999. “Let me tell you, these modern Master Sommeliers are like emotional hand grenades. You pull their pins and they explode with whining. Oh, boo-hoo, I want so badly to be admired for knowing about wine. It’s pathetic, honestly. Some of them were on their eighth or ninth try! I passed on my first try. You know how? I cheated! But I didn’t get caught. Plus, I have a penis, which turns out to be a huge advantage.”

After 24 new Master Sommeliers were announced last September, an attorney from the firm of Spitbucket, Brettbomb and Fecal, LLC contacted the Court to say he had evidence that one of the proctors, a Master Sommelier, had leaked detailed information about the wines presented in the blind tastings. Many suspected the culprit was Larry Anosmia.

“Hell, that’s insane, I’m not going to be a proctor and gamble,” Anosmia declares, “though this is surely turning into a soap opera. I’m not that stupid. Hey, I feel sorry for the candidates who didn’t cheat but who are being punished as if they did. Really, I do. It sucks to be innocent but treated like you’re guilty. What does it mean to spend years and years, and thousands of dollars, to ultimately take a test that validates you, proves to the world you’re a worthy being, and then have that test mean nothing? Wait. When you think about it, isn’t that always the case? Isn’t that life in a nutshell? Get over it.”

“Look, when you think about it, the Court of Master Sommeliers was faced with a real ethical dilemma. One of its candidates confessed, through an attorney, that she received unsolicited help with the answers from a Master Sommelier. If you’re the Court, what do you do? Well, the answer is simple.” Anosmia has become visibly agitated. “You can’t have someone that ethical pass the exam! That’s just nuts. Nobody wants that. Ethical Master Sommeliers? That’s setting the bar way too high! What would be next? Get rid of all the unethical MSs? Who’s going to peddle shitty Italian wines for Southern Glazers then? More women with MS pins? Oh, for God’s sake, that’s silly. The choice was obvious.”

I ask Anosmia about the very real numbers that say that having an MS in the wine business means that, on average, you’ll make twice as much money as someone without the letters. Larry tells me, “Sure. Probably true. Here’s how that works. You spend countless hours cooing over the great wines of the world, tasting artisan wines and natural wines and unicorn wines, falling in love with the indisputable magic that the fermentation of humble grapes brings to our lives, then you pass all the worthless tests and get your MS pin. Now, how do you get the return on your investment? Simple. You get hired by the clowns at Constellation, or you become part of the Jackson Family Wines’ MS petting zoo, or you take a high paying job with a giant corporate distributor — in other words, you go to work shilling for all the wines that you have come to hate. They’re the only ones who will pay you serious money! It’s like getting your Ph.D. in Literature from Yale and going to work for Rupert Murdoch. ‘I know, I’ll get credentials and volunteer in Hell!’ You make twice as much money as other wine professionals because you sold your soul when it finally became worth something. The Court has more hacks than a ‘Halloween’ remake.”

Master Sommeliers have attained celebrity status in recent years, but many fear that this cheating scandal will take some of the luster from their belettered names. Larry Anosmia MS is certainly one who is outspoken and angry about it. He Justice Kavanaghed me:

“This entire process has become a national disgrace! We’re Master Sommeliers, dammit! We drank a lot of wine, OK? Everyone did. I drank wine with my friends. Sometimes I drank too much wine. Sometimes others did. I liked wine. I still like wine, OK? But I never drank so much wine that I blacked out. I drank enough to ruin my relationships, but I never drank so much wine that I emailed answers to the exam to my students in order for them to owe me something one day. Email! What an idiot! You know what the ‘e’ stands for in ‘email?’ Evidence! There’s a bright line between drinking wine, which I gladly do, and cheating stupidly and getting caught. I didn’t get caught! I like wine! You like wine, don’t you? Do you like wine, or not?”

And so it goes with this ongoing and meaningless scandal. If it weren’t for the satisfying dose of schadenfreude, we’d all just ignore it. Hope that the Court of Master Sommeliers would just go away. Those repossessed pins have burst their self-satisfied bubble.

“In the end, I’m not sure what all the fuss is about,” Anosmia laments. “If you cheat on an exam that is, at its very heart, meaningless, is that cheating? Let’s say you love opera. You dream about opera. You live for opera. You study every libretto you can find. You spend years immersed in opera. Do you need to take a test administered by a bunch of self-proclaimed opera experts to get an MO after your name to prove you know a lot about opera? Master of Opera? No. That’s stupid. Hell, what happens if those opera experts don’t like you? They’ll just fail you on the singing part of the exam and you’re screwed. ‘Sorry, Miss, you only look like Pavarotti.’ How is wine any different than opera? There’s absolutely nothing inherently admirable about knowing a lot about wine. Why credential it? Who cares if you have letters after your name because you’re a wine expert? You’re just a pompous blowhard. And, therefore, because it’s a worthless credential, why is cheating to get it a crime? It’s like cheating on the New York Times crossword puzzle. Nobody cares! You didn’t get your MS pin? Nobody cares!”

Finally, I ask Anosmia, why the silence from the Court of Master Sommeliers? “It’s a lot like farting,” Anosmia says, “after which you just stare quietly at the wall and hope someone blames the dog. And then you banish the dog from the room as though it’s his fault. If you wait long enough, eventually the stink goes away. But the more you deny being responsible, the more people know you’re the one who farted. In this case, 23 canines got sent to their beds, but we all know where the stink really comes from.