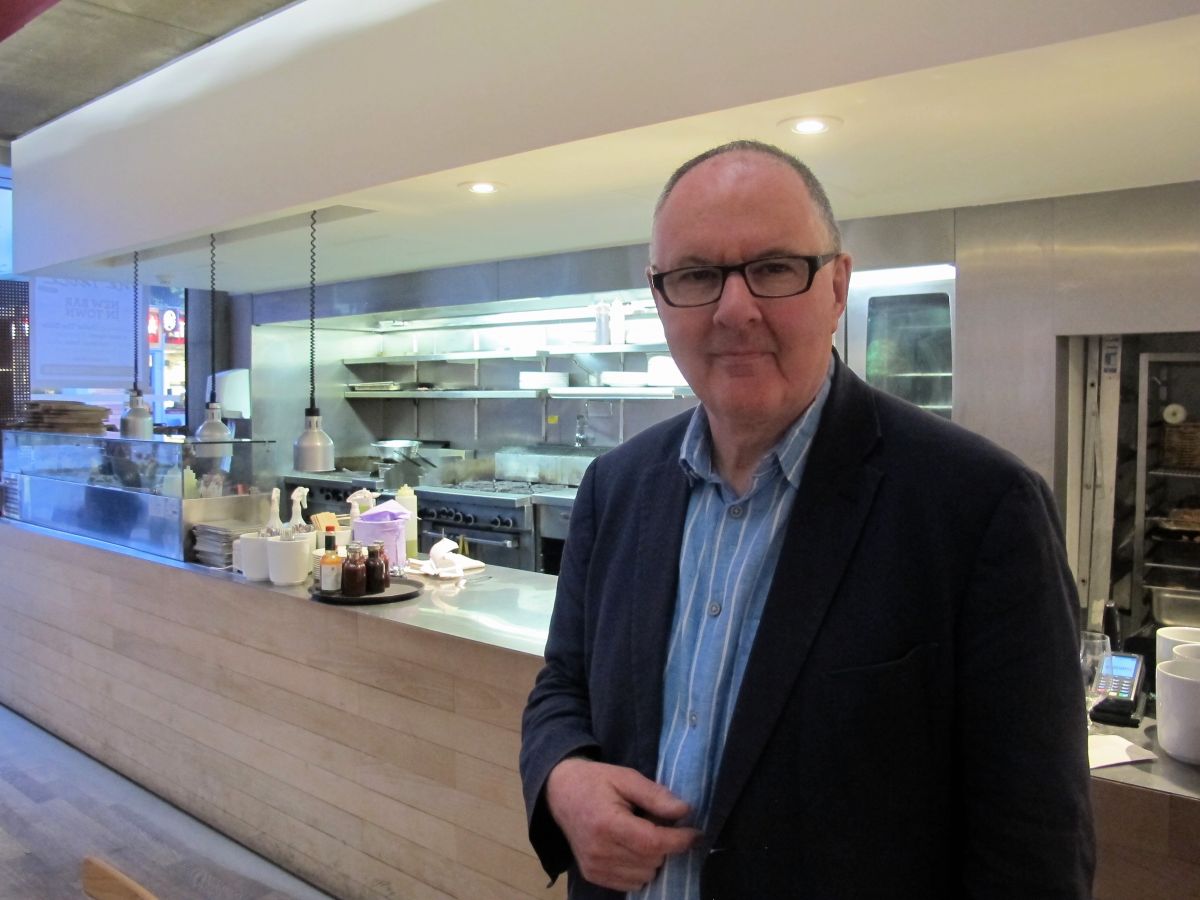 Which comes first: the celebrity chef’s animated persona or their success in television? Martin Lam has largely eschewed the media over his 45 years in the restaurant business. Perhaps it’s how he’s remained so down-to-earth; at 61, he has the affable but astute demeanour of a QC on his day off. Another consequence, however, is that he is not as widely recognised as his peers. Nonetheless his career has been exceptional – head chef at Le Caprice and L’Escargot, owner of Ransome’s Dock – and he deserves to be as well known outside the restaurant trade as he is within it. But what really makes Lam unique as a chef is that he has an equal grasp of both food and wine.

Footholds and hands up

Born in Bristol in 1955, Lam’s father was a food importer. While still at school he had a job as a kitchen porter, and was a full-time chef by the age of 18. After a few years cooking around the west of England, he moved to London to work at the pioneering delicatessen of Justin de Blank. “Justin was Anglo Dutch,” says Lam, “he worked for J. Walter Thompson in advertising, he worked alongside Terrance Conran. He left advertising to open a traiteur in Belgravia. They were way ahead of their time, importing stuff that only places that Fortnum & Mason even touched on, but not with the depth and accuracy that he had. We [the staff] were able to use their produce and develop our repertoire.”

It was here that Lam developed an interest in wine. Justin Le Blank was a friend of Aubert de Villaine (co-owner of Domaine de la Romanée Conti) and stocked de Villaine’s own label collection. “Justin encouraged me to learn about wine, sent me off on a WSET course. Because he saw I was interested… we really got into it, tasting regularly. He was a real inspiration, as was his partner Robert Troop, in showing how it was possible to work with people and encourage them. Cooking in those days wasn’t a particularly attractive area to be in, you did it because you wanted to. They encouraged people to think, and to be good to each other.”

Talking to Lam reminds you that the catering business is precarious and unpredictable, but also companionable; when thinking of a restaurant, we imagine the enduring façade of a building, but it’s really more like a human pyramid. He mentions countless people who have given him a hand up over the years, his gratitude still warm.

From Justin Le Blank’s, Lam moved to the English House, a restaurant in Chelsea that focussed on antiquarian English recipes, where he was promoted to head chef at just 26 years old. The food writer Elizabeth David lived opposite and was a regular. “We were hand-churning ice cream, she said ‘come over, you can borrow my electric one’. I was trembling in my boots! But she was incredibly nice to me.” She allowed him to use her library – a priceless resource before the days of the Internet.

Elizabeth David’s library proved particularly useful when he needed to learn how to make pasta before he joined Le Caprice in 1981 as opening head chef. “Chris Corbin was working at Langham’s. Jeremy King was working at Joe Allen’s in Covent Garden. They hatched an idea with a customer of Langham’s with a dream of opening a restaurant…. It was Joseph Ettedgui, a sweet guy, a Moroccan. He was a hairdresser that sold frocks in the back of his salon, that eventually became the Joseph clothes range.”

But after several busy opening months, disaster struck. “Joseph pulled the plug and he closed the doors after a falling out with Jeremy. We were in shock… I had a 6-month-old daughter at the time, I remember falling asleep at my chef’s desk at 2am after doing the ordering. Chris and Jeremy found alternative finance, but I ducked out.”

Shortly after leaving Le Caprice, Lam visited a friend who was working at L’Escargot in Soho, which had just been opened by Nick Lander and Jancis Robinson. “They were desperately looking for a chef. I said, ‘not me, but I’ll help you out for a bit’.” After making some changes, “it all just went click. It was one of the best working relationships, teams, that I’ve ever had in my life.” He ended up staying for 10 years. “It was so unpretentious – great food and wine and no bullshit… It was Jancis who persuaded Nick to write the menus in English – it was quietly revolutionary. Up until then, everything was in French.”

For his last three years at L’Escargot, Lam was responsible not just for the menu, but also the wine list. “I used to send it to Jancis to check it over for me,” he says. Jancis has fond memories of the time. “It was a real delight to me,” she says, “to see how interested in wine he swiftly became. The list there was initially all-American and was distinguished by being one of the first to group wines by style and to include brief descriptions of each wine.” His wine lists today are still designed with the casual wine drinker in mind, using layout, groupings and descriptions to help guide customers towards something they’ll enjoy.

By the time Lander came to sell his share in L’Escargot in the early Nineties, Lam also owned a significant stake. Lander initially offered to sell his to Lam, but it would have meant raising a cool £1m. Instead, Lam took a gamble on opening a new restaurant at a riverside site in Battersea, far away from the busy West End. “I got friends and family to chip in, we all got paint brushes out to get it open,” he says, and along with his wife Vanessa, he opened Ransome’s Dock to glowing reviews.

Lam worked behind the stove, but at the same time he built up an award-winning 400-bin wine list, every wine with its own description. His understanding of wine and how to create menus to work with diverse styles made it a popular venue for wine merchants to hold winemaker dinners and events.

Ransome’s Dock rapidly became known as ‘the wine trade canteen’. “I find it weird that there aren’t more chefs who are wine savvy… It’s a shame, as someone that works with food and flavour all day long has a natural affinity to finding those things in wine. I’m yet to find a winemaker that doesn’t think about the food to go with their wine. There’s such a synergy between them, a natural fit.” There aren’t many other chefs with a solid grasp of wine, but Lam gives the nod to Roger Jones, Rowley Leigh and Bruce Poole.

Making the restaurant welcoming for families was just as important to Lam. “One of its greatest successes was seeing three or four generations of the same family at Sunday lunch all eating together. And having people coming up to me saying ‘this is my 18-year-old child, I taught them about food here’… we made a difference to people.”

Albert Bridge connected the restaurant to much of its loyal clientele in Chelsea over the River Thames. When the bridge closed for 22 months, it severed this crucial artery and they lost 25% of their business overnight. Then a large company next door that yielded many customers relocated. After 21 years in business, “it was time to stop, before we became seriously ill – longer and longer hours, but still putting in 100%… It was a hard decision to make, but we were resolved to do it, and we haven’t regretted it since. It was all-consuming – very little holiday, and seven days a week… The only reason we’d have hung onto it was if [our daughter] had expressed a desire to take it on herself – but she’s too sensible for that!” They closed the doors for the last time in 2013.

Freed from the confines of the kitchen, Lam now consults to other restaurants, currently working on wine lists for Brindisa, the Zetter Group and Grain Store, with several other collaborative projects in the pipeline. “One thing I’d like to do more of is to find people that are in the first stages of planning their first business. I have no plans to be a restaurant doctor, but I’d love to stop people becoming a casualty in the first place, by nurturing them and giving them a helping hand.” When discussing previous Ransome’s Dock staff members who have since gone on to open their own establishments, his face lights up.

When asked how he managed to stay successfully operating for over twenty years, he replies “well we wanted to, aside from anything else. I would say when you have a skill or a talent or training – it’s your metier, you earn your living from it. You don’t just bring in equity finance after 3 years and roll it out.” In the era of the popup and the microtrend, Lam is a reminder of the timeless and universal attributes of the restaurateur – to nourish, and quite literally – from the French, and the Latin before that – to restore. His customers, staff and clients will no doubt benefit from these qualities for years to come.