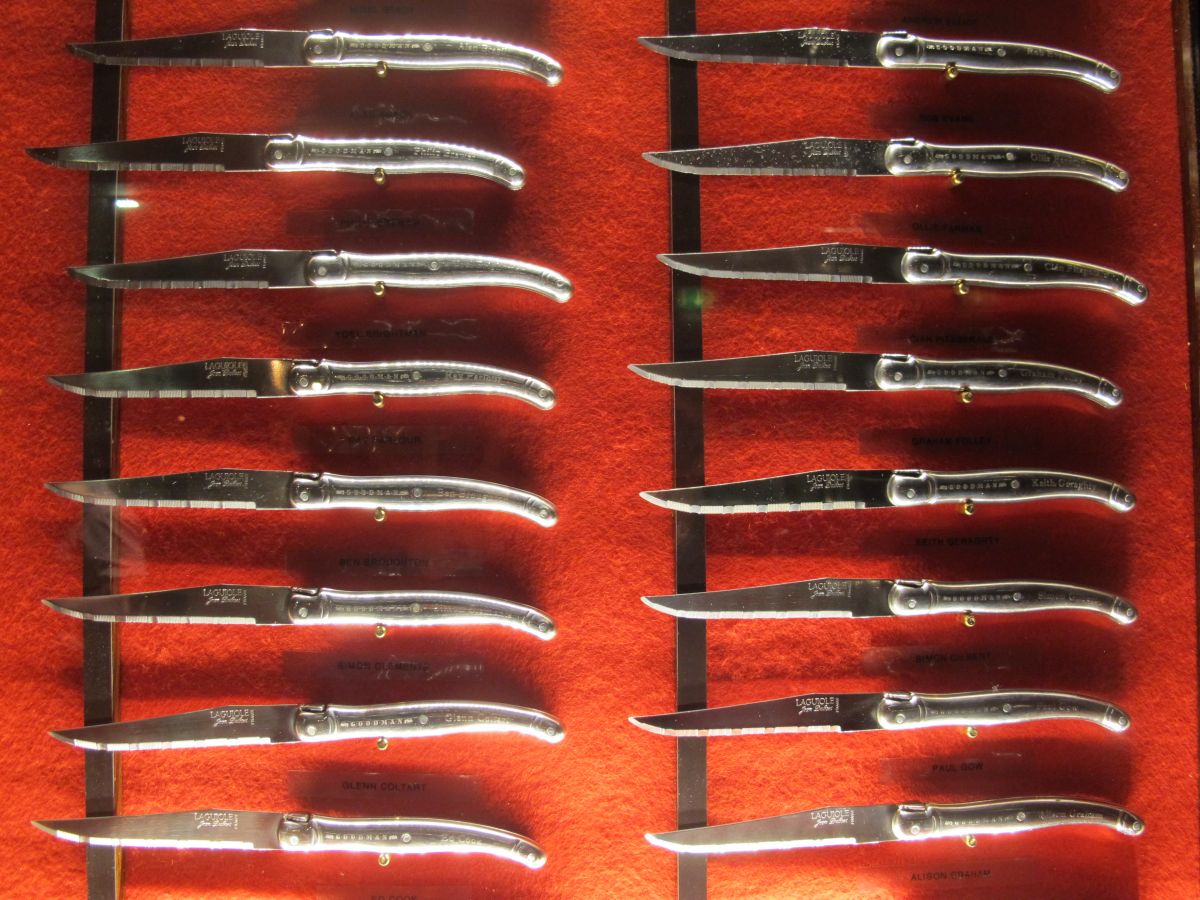 Last week was exhausting. In the course of judging the 2016 Graffigna London Steak Awards I had to visit four of London’s best steak restaurants on four consecutive nights. I mentioned it on Twitter in the hope of some sympathy and support, but for whatever reason I received none. The world can be so cold. But do not weep for me. After judging last year’s awards that saw Hawksmoor win the title, I’ve been secretly looking forward to this year’s competition for, oh, about 364 days. OK I admit it: you’re right. I am a lucky bastard.

In order to pinpoint the best steak that London has to offer, the competition starts with a public vote. Then a panel of four judges (Jon Hawkins, editor of Foodism magazine; Tristan O’Hana, editor of Pub & Bar magazine; chef Neil Rankin and me) visits the four top-rated restaurants to find a winner. We take into account service, ambiance and value for money, but the quality of the steak is paramount. This year, the finalists are Goodman, Gaucho, Hawksmoor and MASH.

The final results aren’t published until 1st July so I can’t divulge the winner just yet (follow Graffigna UK on social media to find out). But I can share with you what makes each of them unique, their respective strengths and weaknesses, and why each one deserves its place on the shortlist. Thanks to my proximity to a phenomenally good butcher (The Butchery SE23), I’ve maintained a worryingly high steak count since the last competition, so I’ll also share my top tips on buying steak, cooking it and matching it with wine.

Though the name might suggest otherwise, MASH is not a purveyor of premium pommes purées but a Modern American Steak House. It’s a handsome subterranean space beneath Brewer Street near Piccadilly that’s simultaneously cavernous and intimate consisting of a glistening island bar, grids of red leather banquettes and various pristine private dining rooms. The seating is broken up with the occasional glass meat locker, just to focus the mind. The service is warm but faultlessly professional.

Choose your meat first by country, then by cut. The American sirloin (£32.00) had the requisite buttery juiciness, and the 55-day aged Danish ribeye (£37.00) delivered on depth of flavour. But it was the 100g of prime Kobe (£65.00) we shared that reigned supreme – like god crying beefy tears on my tongue. And their béarnaise is exceptional.

The wine list is particularly strong on US wines both ‘modern’ macho fruit bombs and more contemporary, balanced styles, though the preponderance of verticals feels a little showy. Most other major regions are represented, with supplementary strength in Barolo and Bordeaux. Prices range from the low £20s to DRC but it’s worth noting that corkage is just £20, and free of charge on Sundays. All in all, MASH offers superb steak-based entertainment.

Goodman arrived in London in 2008 with bullish confidence and quickly earned itself a reputation for top quality meat. It was surprisingly absent from last year’s shortlist, but this year it made the cut. Now there are three branches; I visited Goodman City. It’s a comfortable, medium-sized dining room with a smart yet informal atmosphere with plenty of wood and brown leather. Like MASH it has a distinctly US feel to it, but more New York than Los Angeles. The waiting staff are bright, friendly and remarkably knowledgeable, happy to talk not just about steak but also wine and butchery.

The steaks come from two sources: US corn-fed Black Angus from Nebraska and UK grass-fed native breeds. Both are aged in-house for around 25 days. The 850g US Porterhouse (£70.00) was an excellent example of its type and the 700g UK Hereford wing-rib (£57.75) was juicy and flavoursome. The roaring charcoal oven delivers a crackling crust and an addictive smokiness. Do not skip the starters; they are superlative, particularly the tempura prawns. Sides, however, are fairly basic.

Their wine list is another strength. Like MASH it’s strong on California, with plenty of choice elsewhere, and even the smaller selection of whites has been put together with care. There isn’t much choice under £30 a bottle, and the by-the-glass selection is limited. Prices, however, are remarkably fair for this part of town. It’s eminently clear why Goodman has so many committed fans.

Gaucho has grown into a sizeable chain over the past decade or so. There are now a dozen branches in London, a couple in the North and three abroad – even one in Buenos Aires. The Tower Bridge site is fitted out in their signature monochrome; wall-to-wall black and white leather, and the occasional Friesian wall covering. Waiters dressed as gauchos (Argentinean cowboys) circle the room with steaks on boards to help demonstrate the different cuts.

It’s all grass-fed Aberdeen Angus from their own farm in Argentina, wet-aged for 25-30 days during its journey by sea to Europe. The 400g ribeye (£30.95) was juicy and flavoursome, the 400g churrasco-style fillet (£47.95) was beautifully textured if over-seasoned. Starters and desserts are not this restaurant’s strongest suits, but the views overlooking Tower Bridge are hard to beat.

Our waiter communicated all we needed to know about the beef, then accidently smashed a full wine glass on the table. It could happen to anyone, and it’s the response that counts; swift and thorough in this instance. The wine was Argentinean of course; the entire list is. It’s an extensive selection, not always the best value, but will sate the dedicated Malbec lover.

Last year, on the back of a meal at the Mayfair branch, Hawksmoor deservedly lifted the trophy at the inaugural London Steak Awards. There are half a dozen sites now in London, one in Manchester and soon a flagship branch in New York. This time I paid a visit to the Seven Dials restaurant in Covent Garden. It’s another capacious underground bunker, with vaulted brickwork, herringbone wooden flooring and squat green leather armchairs here providing a distinctly British feel.

The meat, too, is British – rare breeds, grass-fed then finished on corn, slaughtered at 3-5 years then dry-aged for 28-55 days. We shared a 950g longhorn porterhouse (£87.25; a 400g ribeye would set you back £31.00). The quality of the meat here is indisputable, and the sauces, sides and starters all deserve a mention. Especially the triple-cooked chips, which, I would dare to suggest, cannot be improved upon.

The front-of-house staff are confident, attentive and knowledgeable, and sommelier Nacho Campo was on hand to offer guidance with the wines. Bastard that I am, I asked him to suggest a white wine from his Coravin list to accompany the steaks; his suggestion was that most weaponised of white styles, a 2014 Rene Mossé ‘Arena’ Savennières (£10.50/125ml). It was as good a match as any white wine could have provided. The wine list here is excellent; smart, stylistically unhindered and fairly priced, with endless choices from £23 upwards and plenty of options by the glass. Or go on a Monday and take your own bottle for £5 corkage. Hawksmoor may be expanding stateside, but their UK operation hasn’t slackened. 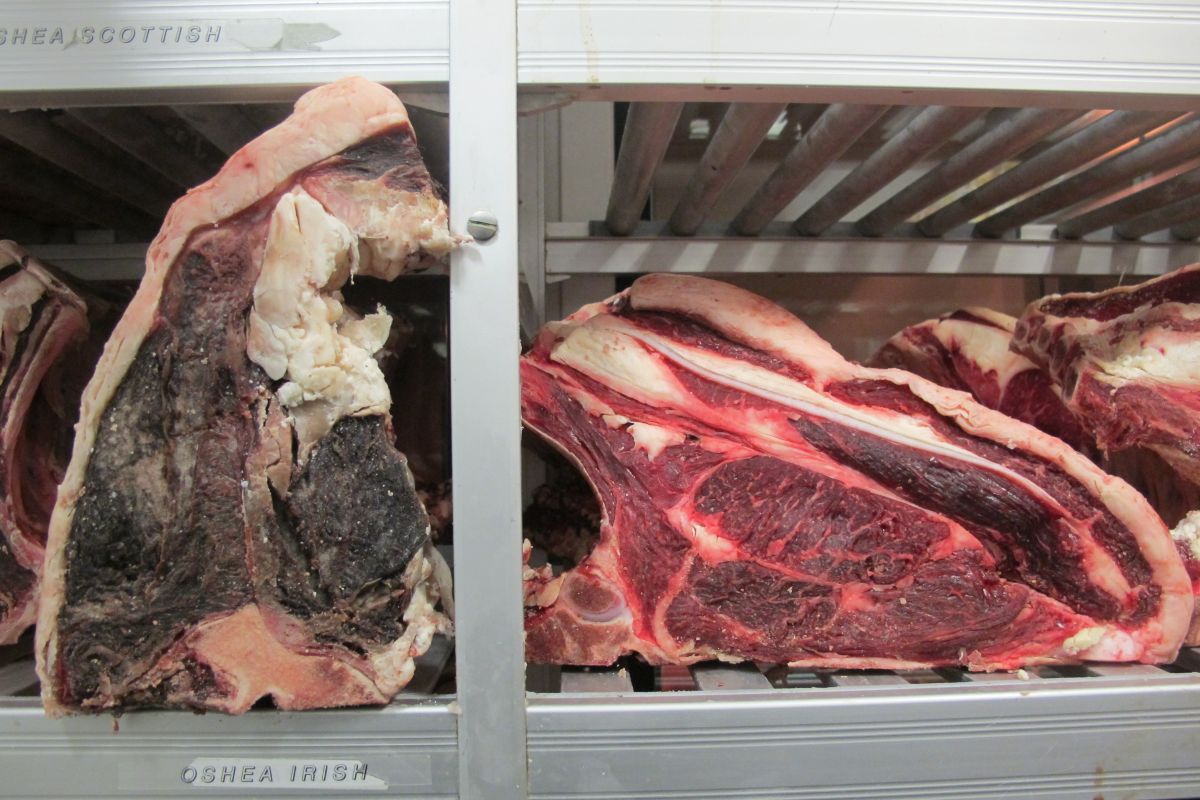 We have countless steak restaurants now in London, but there is considerable variability in quality, and that is what makes this competition so worthwhile. Particularly since good steak is an expensive commodity – as with wine, ‘less but better’ is a smart strategy – but that means the right choice is even more critical. But you can of course eat good steak at home with relative ease – it doesn’t necessarily require complex hardware or technique. Here are a few pointers.

1. The most important thing of all is to find a good butcher. In London, try C. Lidgate in Holland Park, The Butchery SE23 in Forest Hill, Randall’s in Fulham, Meat N16 in Stoke Newington or a branch of The Ginger Pig. For mail order try Turner & George.

2. Ask about the animal’s diet. Grass-fed is all-round better than grain fed, though grass-fed then finished on grain can also produce excellent steak.

3. The age of the cow at slaughter is also important; you’re looking for at least a couple of years, but double that (or more) would be even better from a reliable butcher.

4. The breed of cattle does make a difference but it’s a relatively minor consideration. If you live in the UK, stick with UK native breeds (Longhorn, Shorthorn, Hereford, Dexter, etc.) and you should be fine.

5. Different cuts make a big difference. For optimum juiciness and flavour, you need to have some fat, so go for sirloin or ribeye. Fillet, however, can’t be beaten for tenderness and texture. Rump can be good, but it’s usually cheaper for a reason. Meat on the bone (T-bone, wing-rib, bone-in sirloin, etc.) usually delivers more complexity of flavour, and is often cheaper.

6. The ageing period of the meat is key to complexity and depth of flavour. 28 days should be considered a bare minimum; 45 to 60 days is a good middle ground; beyond this is no bad thing, but you risk sacrificing juiciness for depth of flavour. In my experience, dry ageing produces a better flavour; beware of bloody, vacuum-packed steaks.

1. Allow around 400g of meat per person. Don’t forget to account for any bone; ask the butcher how much it’s likely to weigh.

2. If you don’t have a fancy oven or charcoal grill, invest in a heavy griddle pan. They make all the difference to the crust and are essential for thinner cuts.

3. Oil the meat liberally, not the pan. Season generously with salt and pepper just before cooking.

4. Ensure the griddle is ferociously hot before you introduce the meat. Open the windows and take down the smoke alarm. If it has a bone in, open the doors too.

5. The right cuisson (done-ness) depends on timing. Timing will vary depending on a number of factors, but principally the dimensions of the steak and whether it has a bone in or not. As a very rough guide: for a 3cm-thick sirloin (no bone) to be cooked rare, cook for 2 minutes on one side, then turn for another 2 minutes. DO NOT MOVE THE STEAK WHILE IT COOKS. For a thicker steak such as a 1kg T-bone, sear on both sides for 2 minutes, then finish in a 180°C oven for 25 minutes for medium rare.

6. If the meat is more than a 2cm thick, rest it for a couple of minutes before you serve it; the thicker the cut, the longer the rest, up to 25 minutes for a larger joint. Prioritise flavour over serving temperature.

1. The wine must be red. At a push, you could go for a robust rosé (e.g. Bandol, Barossa) with a rare fillet, but we will never be friends.

2. After that, you don’t need to worry too much. Good steak is versatile so a trusty friend to wine lovers.

3. That said, the more flavoursome the steak, the bolder the red should be. So for a rare US fillet, you could consider a Valpolicella Ripasso, a Crozes-Hermitage, a Bierzo. For more robust cuts like ribeye or T-bone, go for something fuller in flavour and texture like Hunter Valley Shiraz, Ribera del Duero or Brunello.

5. If you’re serving any powerful sides or sauces with the meat, take them into account when choosing the wine. But these would only detract from the meat, so they’re better avoided to be honest. It’s hard to go wrong with some sautéed potatoes with rosemary and garlic and some buttered, wilted spinach.

6. Don’t leave the wine on the counter in the kitchen while you’re cooking, it’ll get too hot. Leave it in the fridge instead but you might want to set an alarm for 20 minutes to remind you to take it out again.