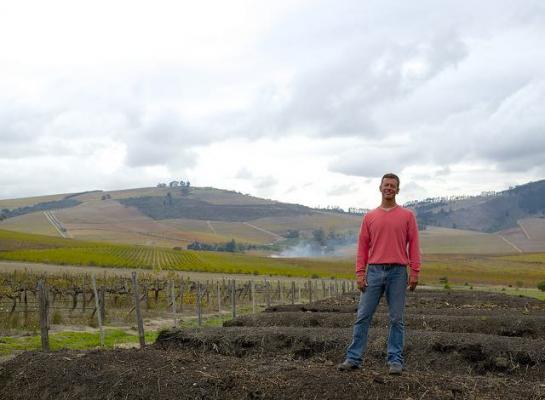 The vineyards of the Western Cape are at their most beautiful in the autumn, a variegated canvas of browns, reds, oranges and yellows. But those colours hide a secret that has done untold damage to the South African wine industry and continues to affect its potential to produce great wines. The redder the leaves, the more likely they are to be infected with what scientists call GLRaV-3 – leafroll virus – and the shorter their potential lifespan.

Leafroll is eventually fatal, although vineyards that have it can survive and continue to yield grapes, even as they decline in quality and productivity. It seems to affect some grapes more than others – the later maturing the variety, the more astringent and fruitless the wines they produce, especially if they are red – and is more prevalent in more intensively farmed regions, but it’s detrimental to all of them. There’s a school of thought that says that the virus can contribute to quality, but this is ludicrous. As Abrie Beeslaar of Kanonkop puts it: “If your plants are healthy, you make better wines.”

South Africa is increasingly known for its old vine reds and whites, thanks to the pioneering work of the viticulturist, Rosa Kruger, who has assembled a list of all the vineyards that are over 35 years’ old on her website, www.iamold.co.za. But what strikes you about the roll call is how few of the Cape’s parcels are “old”: only 3,358 hectares (1,376 ha of them unsexy Sultana) out of a national total of 98,597 hectares. The reason there aren’t more venerable vineyards is twofold: leafroll virus and – often related to it – low, uneconomic yields.

Like a patient living with HIV, the South African industry has learnt to manage leafroll since it was discovered in the 1930s. But until comparatively recently, the only long term way to deal with infected vines was to pull them out and replant with “virus-free” material. And yet that didn’t really work either. Little by little, the virus came back, even when people treated their vineyards with chemicals. Worse, no one really knew what was spreading it.

But now there has been a breakthrough. Once it was discovered that the vector for the virus was mealybug (Planococcus ficus), the search was on to find ways of controlling and eliminating the insect. Using research from the fruit industry, which had faced a similar problem, the first farm to tackle leafroll in a serious way was Vergelegen, where André van Rensburg started work with Professor Gerhard Pietersen of the University of Pretoria in 1999. Van Renbsurg pulled out most of his vineyards and started again, virus-free.

The answer to arresting the spread of leafroll lay in nature rather than the agrochemical industry, using a combination of pheromone traps and predators (flies, wasps and ladybirds). Female mealybugs are protected by ants (who feed on a nectar they secrete), so Vergelegen had to deal with them, too, by ploughing up their nests, releasing different predators and using sticky “trunk barriers” on the vines.

This isn’t the only natural way to deal with the problem. Johann Reyneke, the leading biodynamic producer in the South Africa, says that by having a more balanced vineyard and growing the right cover crops, he doesn’t have a problem with mealybugs. “I found that they lived on the roots of dandelions, so I left them where they were and they didn’t migrate. I’ve never released predators in my vineyards; I just increased the biodiversity. You can either fight nature or try to guide it to your advantage.”

Most producers in South Africa continue to use chemicals to control the problem. Carl Schultz of Hartenberg Estate calls the discovery of natural predators “the single most important development in South African wine quality in the last 20 years,” but adds that “the uptake isn’t as great as it should be. The irony is that wasps and ladybirds are cheaper than chemicals and way more effective.” The information is freely available through bodies such as BioBee South Africa and Winetech, but not enough farmers are reading it.

What percentage of South Africa’s vineyards are infected with leafroll? There’s no official figure as far as I know, but 50% is a conservative estimate and the number may be as high as 75%. What is certain is that leafroll’s spread is exponential. Left unchecked, it can spread through a farm in five or six years. There is no cure for the virus, merely ways of preventing its spread to neighbouring vines and vineyards.

The older the vine, the more likely it is to be virus-affected. “Before the 1990s, the wine industry was essentially a co-operative system,” says Kruger. “There wasn’t enough money to pay people properly, let alone control mealybug.” Things are better now, thanks to virus-free plant material and a better understanding of how leafroll is transmitted, but cash is still in short supply. Good farming is expensive and South Africa’s grape and wine prices are still cheap in global terms. Leafroll reamains a major issue, but thanks to those wasps and ladybirds, the poor profitability of South African wine has superseded it.