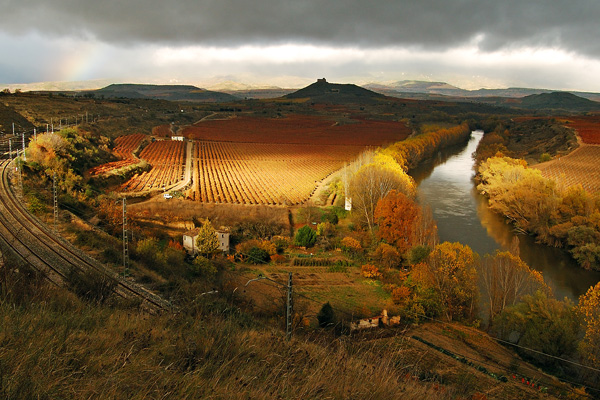 The story of Rioja resembles the old Chinese curse – they’ve lived through many interesting times. Boom and bust, fame and oblivion.

Rioja wine is on the ascent again as it develops a formula – tradition with prudent innovation and a new-found interest in terroir – that seems more promising than any of its predecessors, with more diversity and better overall quality.

The quality of Rioja wines is often defined, in Spain and abroad, in strict aging terms: time spent in oak, types of oak, age of barrels, toast levels, Crianza, Reserva, Gran Reserva… Elsewhere in the world, the vineyards, the soils and the vines will be mentioned – but not here, much to the dismay of current growers such as Telmo Rodríguez, who goes ballistic every time he hears that oaky litany. Yet, behind the scenes, it was vineyards, not barrels, that were decisive in the region’s history of ups and downs.

Drier and somewhat warmer – thanks to the protection the Sierra Cantabria mountains provide from the storm fronts coming from the Atlantic – than its neighbor, Bordeaux (which lies 200 miles to the north), Rioja was little-known until the middle of the 19th century, although the poor limestone-based soils and the dry climate provided excellent conditions for growing quality grapes. Its wines, made in bulk by local families, only were appreciated locally. They lacked the means to reach other markets, i.e., they lacked a sea port or a river which could be navigated, like the Rhine, the Rhône, the Loire or the Douro.

With the arrival of the first railroad line to Logroño and Haro, the region’s two main cities, that problem was solved by the middle of the 19th century. Two enterprising noblemen, the Marqués de Riscal and the Marqués de Murrieta, built the two modern ‘bodegas’ (wineries) around 1860, and brought most of the technology and the know-how from Bordeaux. The first winemaker in Rioja, Riscal’s Jean Pinaud, came in 1858 from Château Lanessan, where he was ‘maître de chai’.

Wines were made as in Bordeaux, and traditional Rioja is still very similar to that style – but this is as Bordeaux was 150 years ago, not today. In a way, you’re tasting a drop of vinous history when you’re tasting a bottle of a wine like Viña Tondonia, which the López de Heredia family has been making in exactly the same fashion since the 1880s.

That style of winemaking did provide for smoothness and lightness in the wine that were reminiscent of cooler regions such as Bordeaux itself. Basically, it consisted of rather early harvesting, a short fermentation with minimal contact between the juice and the grape skins (deep-colored wines with lots of dry extract were considered less refined, and therefore shunned), and a very long aging period in Bordeaux-shaped, 225-liter barrels – up to four, five or even more years. Actually, the wine was often not bottled until a buyer had been found. The names Reserva and Gran Reserva stemmed from this practice – they described those wines that were apt to withstand the longest stays in barrel.

Traditional Rioja barrels were made of American oak for two basic reasons: it was (and is) less expensive than French oak, and due to the longstanding Spanish trade with the Americas, wood had been imported for decades by the cooperages in Jerez de la Frontera for sherry wine. But it was never new oak: white wine was placed in new oak barrels to tame them, then they were used for red.

Most of these other wineries, however, have now put their eggs into two baskets, making at least one or two wines in the more modern style pioneered since the late 1970s by such producers as Contino and Remelluri – two single estates.

Estate wines had been practically non-existent in Rioja since its first boom around 1880, which coincided with the arrival of phylloxera in France and the downturn for a few years of production in Bordeaux. Some (not all) of the wineries owned vineyards, but most were bringing in grapes bought from many small producers and blended the wines to make specific ‘house styles’. Often these were not vintage-dated, since several vintages were mixed. Vintage dating wasn’t generalized until the 1960s. Therefore, the Rioja scene was more like the Champagne scene – with the large ‘maisons’ and their house styles – than the Bordeaux scene.

But something had changed between pre-phylloxera times and 1980: the nature and quality of the vineyards. The productive garnacha (grenache) variety, entirely absent before the scourge, was widely planted afterwards, and by 1970 it was widely blamed for the low quality of wines from high-yielding vineyards. Top bodegas and influential writers pushed for a return to tempranillo, and replanting was carried out on a large scale. Unfortunately, the problem was not just the grape variety – it was the fertile valley-bottom soils on which garnacha had been planted. Tempranillo was planted on the same sites, so in the 1970s a mass of dilute, high-yield tempranillo replaced the mass of dilute, high-yield garnacha, and overall quality took a dip while production soared. 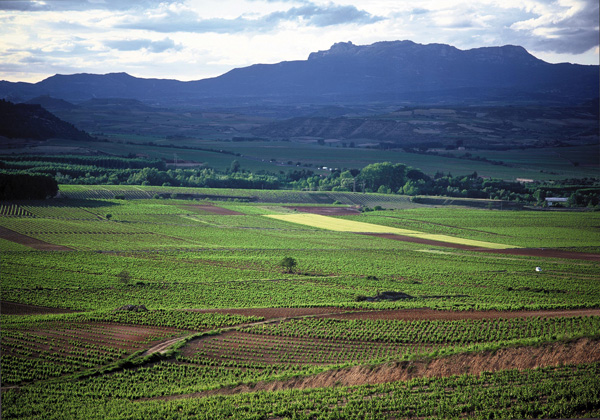 The first estate wines, 30 years ago, resurrected the interest in different, well-defined, higher quality terroirs. And with them came the new winemakers who wished to make more assertive wines, with riper grapes and more maceration in fermentations, plus sometimes more new oak, which would reflect the soil of Rioja more precisely than the traditional wines – or so the theory went.

Juan Carlos López de Lacalle at Artadi, his former winemaker Benjamín Romeo, Fernando Remírez de Ganuza, Telmo Rodríguez (who would later change tack and focus his attention much more on the land than on the winemaking), Miguel Ángel de Gregorio at Allende, Marcos Eguren at Sierra Cantabria (and also Señorío de San Vicente and Viñedos de Páganos now) were the driving forces behind the modernist renewal.

Their wines were sometimes criticized as “too international”, aged in French rather than American oak with higher percentages of new barrels, but at their best they showed a savory, ‘umami’ style borne of the limestone land, with a dense, structured but suave load of red-berry-like tempranillo fruit, that could only impress.

At any rate, both styles coexist peacefully, despite some ill-informed complaints outside of Spain that the traditional one is dying out. And, as elsewhere, in the finer wines winemaking differences tend to diminish as they age in bottle. A Contino from 1982 is today remarkably similar, in a classic Rioja style, to a CVNE Viña Real Gran Reserva from the same vintage.

Meanwhile, the change in international tastes after 2000, toward more elegant, drinkable and subtle wines helped the likes of López de Heredia to regain their erstwhile notoriety and some newcomers, such as Luis Valentín and Carmen Enciso of Valenciso, to be successful with entirely traditional Riojas.

But that’s not the end of the story. Over the past decade a third way has slowly gained some momentum: that of terroir over and above tradition or innovation.

A few growers who actually drove their tractors and pruned their vines had started making and bottling their own wines a few years earlier, and one of them, Abel Mendoza Monge (with the invaluable help of his enologist wife, Maite), was beginning to make headlines.

The trend was reinforced with the return home of two prodigal sons – Álvaro Palacios, who returned home to Alfaro from his Priorat and Bierzo ventures (which he has not abandoned) to take the reins of Palacios Remondo, the family winery in Rioja Baja, and Telmo Rodríguez, who in 2010 was in control again at Remelluri after a successful decade of winemaking throughout Spain, having solved his well-publicized differences with his father.

Both charismatic winemakers, as others throughout Spain in an underpublicized back-to-the-land movement, had become progressively disenchanted with the “New World” credo – new oak with much extraction and high alcohol – and more attuned to terroir differences. Their wines have increasingly reflected this evolution since 2000.

Today, Palacios defends a larger role for garnacha in the warmer, drier Rioja Baja, and his blends reflect this, giving the Palacios Remondo wines a much more floral, subtle character, while Rodríguez has innovated with his ‘village appellation’ wines at Remelluri.

These are wines made with bought-in grapes from each of the two villages adjoining the estate, Labastida and San Vicente de la Sonsierra. The grapes used to be blended into Remelluri, but Rodríguez now is only using his own estate-grown grapes for that. He offered his long-time contract suppliers to make two separate cuvées with their grapes, and they accepted.

“The difference between the more delicate Labastida village wine and the more assertive San Vicente one is remarkable,” Rodríguez enthuses.

Tellingly, the Rioja council allowed him, willy-nilly, to put the village names on the labels, but refused to officially recognize village sub-appellations, something the Priorat council has already enacted. The three Rioja sub-zones (Alta, Alavesa, Baja) will continue to reflect only the location of the winery, not of the vineyards. Blends and ‘house styles’ are still much preferred by the Rioja authorities, who value their appellation as a brand that should not become submerged in a set of terroir-based sub-appellations.