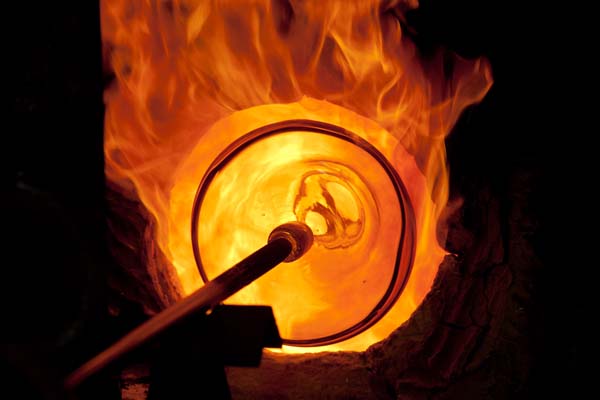 In this piece, US-based wine writer Ron Washam pokes fun at Riedel, the wine glass company, a brand that I respect and use personally. This is a piece of satire. No offence is meant to be caused either to Georg Riedel or to his business. Please note that no interview with Georg Riedel took place in the creation of this article and that all quotes are fictitious and do not represent the personal views or business practices of Georg Riedel or his company. Tim Atkin

“Riedel me this,” Georg said. “What’s the difference between drinking from my specially designed Sangiovese glass, and drinking your Chianti Classico from an ordinary wine glass?”

“When you drink from my Sangiovese glass, your lipstick leaves a mark — on my ass!”

So begins my interview with the patron saint of wine glasses. Building on the bogus science of a tongue map, which any real man would never consult were his tongue lost, Georg has built his business into a global wine phenomenon. “Hell, I thought,” Georg explains, “people think the shape of the goddam wine bottle is significant, why not the shape of the glass? I know I can convince wealthy wine drinkers that it matters, that’s easy. And from there, the unwashed public will follow.” And a billion dollar business was born.

Way back in the 1960s, it was believed that the human tongue was divided into four regions, like Eastern Europe after World War II. The tongue map showed the separate parts of the tongue that tasted salty, sweet, bitter and sour. The tongue map was accepted science back in the day. It was completely disproven fifty years ago, but that’s unimportant. What’s important is people believed in it; they’d studied it as children in school. They also believed you could get polio swimming in a pool with poor people, and that JFK was killed by a lone gunman. Georg was the visionary who found a way to capitalize on their ignorance, and the fact that people still think the tongue map is science — which is what great marketing is all about.

“You see,” Georg continues, “the wine business is a very sexist business. As it should be. As it needs to be. For the most part, only men are foolish enough to spend a lot of money on extravagant bottles of wine, ornate shrines to themselves they call wine cellars, and wildly expensive and unnecessary accoutrements, like specialized wine glasses. Women are not so wrapped up in that kind of scheisse. Which is why they will never run the wine business, and why we pretend they are simply not as good at it. It is small-minded and immature men who understand that the only way to impress other men is to buy expensive wines and pour them into ridiculous decanters and serve them in very particular wine glasses. Things we convince them of using pseudo-science and half-truths. I am simply the man who found that way to tap into their vanity and overblown egos. So, you see, I love our sexist business.”

Georg has designed wine glasses that are, he says, perfect for specific varieties or styles of wine. “We brought in winemakers as consultants, to make it appear more legitimate. People believe winemakers. I don’t know why. They believe that winemakers always tell the truth. They once believed that about priests. We know how that worked out.”

In the beginning, Georg preached that his wine glasses, designed specifically for Bordeaux, or Burgundy, were designed to funnel the wine to the proper areas of the tongue to maximize the pleasure of drinking your First Growth or Grand Cru. It was misdirection. Magical thinking. But in a controlled situation, with Georg holding court, he could convince anyone that his wine glass was superior to any other for a particular wine variety. Much as an illusionist can convince you he can restore a bank note with your signature on it after he’s torn it into pieces. It’s sleight of hand, of course. Georg is the master of sleight of tongue. And it’s the reason his company is the legerdemain source for handblown, and overblown, glassware.

“Once I was able to re-establish the basics, and they had long been established, I mean, who didn’t already have different Bordeaux and Burgundy glasses?, then I was able to exaggerate. It’s a comic effect, really. How far can we take this mania for worrying about which glass to drink our wine from? Like a great comedian, I understood that there was no limit. I simply had to deliver them with a straight face. ‘Yes, your Bordeaux stem is just fine for your thirty-year-old Hermitage. Nothing at all wrong with using it. Except you are denying yourself the full pleasure and revelation of your fine old Syrah by not using my Syrah glass. This is your choice, of course, I cannot dictate taste.’ But I sure as hell can manipulate it.”

There’s less emphasis on tongue maps these days, but the science of smell is a wonderful substitute. “When it comes to smell, you can convince people of anything. Does my Zinfandel smell just slightly better from Georg’s Zinfandel glass than my everyday red wine glass? If he says so. If I told them it smelled better from a glass ashtray, as long as I had some imaginary science to back it up, they’d believe me. People are very insecure when it comes to their sense of smell. Hell, they’re around Donald Trump and don’t smell a rat.”

With as many as 6,000 grape varieties, is there a limit to how many different wine glasses Georg can peddle? “Perhaps. But it doesn’t matter. I love to be in a new restaurant and overhear the sommelier tell a customer, ‘Let me get the proper wine glass for your selection.’ Sommeliers are the stupidest, most gullible, people I deal with, and, thus, my best messengers. I throw them expensive luncheons, taste them on fine wines, and I convince them, because they are essentially very insecure little people, that each wine glass is better than the previous for exploring a wine’s depths. I can see their beady little eyes light up. They spend their lives convincing people that more expensive wines are better. I simply speak their language back at them, only about wine glasses, and it always works.”

More recently, Georg has expanded his empire by adding a line of stemless wine glasses. the “O” glasses. “In our current world, we all feel like we need to make do with less,” Georg tells me, “and what is there to remove from a wine glass but the stem? For years we made fun of people who held their wine glasses by the bowl. Now I have everyone doing that and thinking it’s cool and trendy and making do with less. Idiots!

“I tell you, I’m the funniest guy in the wine business!”