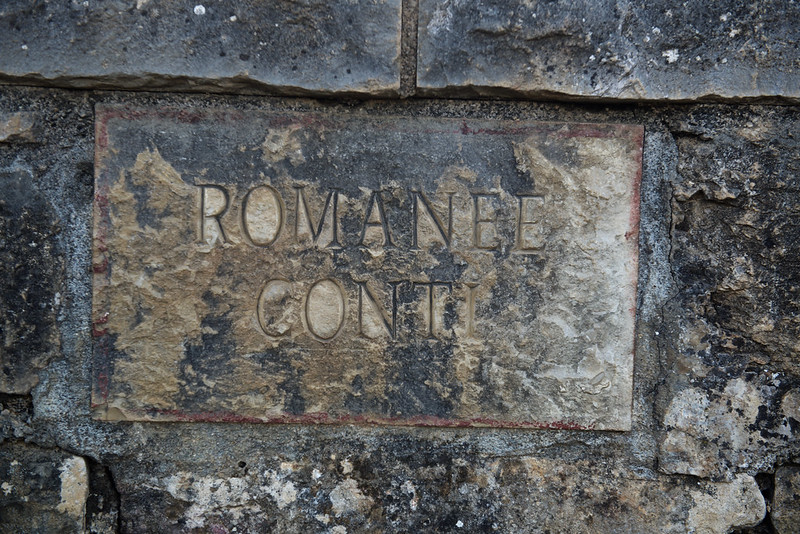 “In that Empire, the Art of Cartography attained such Perfection that the map of a single Province occupied the entirety of a City, and the map of the Empire, the entirety of a Province. In time, those Unconscionable Maps no longer satisfied, and the Cartographers Guilds struck a Map of the Empire whose size was that of the Empire, and which coincided point for point with it. The following Generations, who were not so fond of the Study of Cartography as their Forebears had been, saw that that vast Map was Useless.”

If I owned DRC, I’d embrace the Burgundian vernacular of self-directed assembly. No doubt about it. For the most part, our world is made up out of smaller parts, and the productive connections formed between them. Take the linkage that binds bees, flowers and honey, for example. The tight fit between Pinot Noir and Vosne’s geology is just another such actualisation.

When Aubert de Villaine says that Romanée-Conti and Échézeaux make themselves he’s not rehashing a form of spontaneous generation, but affirming the return of a particular order, hierarchy and style; year after year. David Beckham becoming a proxy ambassador for DRC is perhaps the most Champagne-thing ever, but even he knows to taste the Échézeaux first.

Looking across to Bordeaux (blends), Champagne (bottle fermentation) and Jerez (fractional blending) it’s apparent that Burgundy’s output could have been very different. Champagnisation must have appeared an attractive option to cash strapped Chablis domaines in the 1950s and 1960s. What we now think of as necessity develops over time, drawing on the interconnections that mesh soil, variety, savoir faire, customers, law-making  and ownership together. Once you get beyond Imperium Romanum and Muscat origin, stories develop local plot lines.

Champagne secured a future for itself by switching from still to sparkling wine production, though the transition was more of a staggered evolution than a singular event. It takes time for regions to isolate, stabilise and rank their production into a reproducible matrix of identifiable differences and qualities. Winemakers must  tune in to faint clues and signs.  Sense the liquid spreading over the great velvety surface of the organs, as Lyotard might have put it. Feel their way into production rather than standing outside

In Champagne, necessity and reproducibility act through brands.  Cristal and Cuvée Nicolas François Billecart find consistency and amplification by blending and ageing known vineyard elements. Like mariners in the age of sail who circumnavigated the globe by catching rides on currents and trade winds, the Champenois harness reduction, oxidation, sur lie and Maillard in pursuit of expressivity. Only because Richard Geoffroy mastered the moving parts of production – charting discreet flows and changes of state – could Dom Pérignon expand the radius of its productive circle. The reward for LVMH was more of the same.

Of course, Champagne sluices out dirge too. There are less salubrious starting points than Grand Cru Verzenay. Journeys can be cut short, and flows stemmed. Even the most eminent regions carry remnants of an inglorious past over into their commercial present.  This is as true for Burgundy as it is for Champagne, and in Beaune négociants still fight over the low grade chaff. Fifty years ago one would have been grateful for Cottin Frères Montrachet, but today’s label junkie is more likely to risk their life crossing the périphérique for a bottle of Leroy Bourgogne génerique than a so-so Grand Cru.

The stylistic crossovers between Champagne and Burgundy are uninspiring. Bérêche is a fine producer, but the Coteaux Champenois is a car crash, with an oak tree.  Borders between appellations aren’t always as free flowing as the short stretches of highway that run between them. Crémant de Bourgogne shares so much with the Côte des Blancs, but proper comparison is rarely justified.

The movement of intellectual property may falter between Chablis and the Aube but the enthusiasm for small scale production continues to push northwards. Across France, Napoleonic laws of succession dispersed vineyard ownership more effectively than marriage could bring plots back together, leaving the possibility of fracture latent in Burgundy and Champagne, should the commercial conditions for separation arise.

In the middle of the last century, the demand and infrastructure for domaine-bottling barely existed within Burgundy, and Beaune négociants provided a useful service by offering small  growers a route to market, albeit anonymously. Batch-blending filled tanks whilst simultaneously obliterating any features that might have distinguished growers’ own handiwork. Rules were put in place around quality but there were few enforcers.  With hindsight, it’s odd to think how this period of sustained low-quality production secured such a narrowly conceived, yet high-minded understanding of vineyard determinism. Bulk “Pommard”, “Chambertin” and “Clos Vougeot” became the only points of intra-regional comparison by default.

When it came, domaine-bottling was the lightning rod that splintered Burgundy’s production. The theme and variations of individual climats and vineyards was overlaid by another theme and variations coming from the domaine themselves. Along the Côte d’Or, vignerons immersed themselves consciously and creatively within a process that was impelled by yeast, bacteria and weather, just as their neighbours in Champagne had been doing for centuries.  If négociants’ activities had cemented the impression that site and style were one and the same thing, the last few decades have shown how partial, evolving and speculative terroir really is. Clearly vineyards impose some form of limitation on their fruit, but actually firming up on these stylistic boundaries and definitions is proving harder than just building walls around them or handing out names. The idea of tenseless qualities has been superseded and sundered by a constitutive gap that has multiplied choice. If you think Lafon’s Meursault 1er Cru Les Perrières is the best white burgundy you’ve ever tasted, then the chances are you’ll prefer his Genevrières to Coche’s idiosyncratic rendition of the former.

What then of the trend to grower Champagne? In as much as it allows vignerons to escape the (supposed) immiseration of co-operative existence and add to the diversity of the region’s overall offer, it should to be welcomed. Anselme Selosse and his acolytes have undoubtedly made Champagne a far more interesting place. My quibble is more nuanced. When Jon Bonné and Alice Feiring laud Ulysse Colin and Selosse they write as if they’ve discovered a parallel méthode through which terroir unveils itself. From my perspective, this is just breathing life into the old Burgundian idea of vineyard hegemony that should have been retired with the arrival of domaine-bottling. The  adjoining regions may share grape varieties, but the Montagne de Reims doesn’t bear geological comparison with the Côte de Nuits.  The dip and graben pressures along the Côte d’Or led to faulting and heterogeneity. It stands to reason that Champagne’s more massive chalk scarps and plateaux don’t require the same degree of mapping resolution and mirroring. As with Borges’ cartographers, there’s a risk of losing perspective in the pursuit of an ideal:- that no vineyard is too small and no change in aspect too insignificant for capture.

Science has made incursions into terroir but is confounded in its progress by so many variables. There isn’t a universal principle that can be formatted to fit all sites, varieties and wine styles. Terroir, to my mind, works better at the level of our intuition and senses than it does inductively, and we should apply this principle to those who insist on holding up the Côte d’Or as an exemplar to other regions.

Like many eminent Old World wine regions, Burgundy is shadowed by a fear of duplication. Our work and decision making is available for imitation and reproduction in a way that place, rocks and soil just aren’t. Winemakers have been scrubbed from the storylines of production and non-interventionism has become a badge of honour, even though it’s an award without an obvious chest or lapel to be pinned against.

Rather than always looking to Burgundy for inspiration, maybe we need to look elsewhere. Manila galleons worked the Pacific, and their helms became so adept at gybing between the trade winds that they could voyage back and forth between Manila and Acapulco without ever beating against the wind.

Instead of conjuring human involvement out of production, perhaps we should try and reintegrate ourselves, taking inspiration from 16th century crews who positioned themselves so as to be propelled by the movements and flows of the elements. Isn’t this, after all, what winemaking is? A dynamic process of return, and not simply an affirmation of place.

When plotting the development of their top cuvées, Champagne houses anticipate a final manoeuvre, when the cork releases its hermetic grip and oxygen gently seeps into the wine. Only then is the circle complete. For chefs de caves, as it is for sailors, becalming is the worst of all fates.

If, as I’m claiming, the Côte d’Or has inflated our idea of “place”, then Champagne shows us ways to push back against boundaries, and test the edges of imposed territories. The Burgundian vernacular may not have caught up with domaine-bottling, but from Mâcon to Chablis, vignerons are exploring the limits of their recently granted sovereignty.