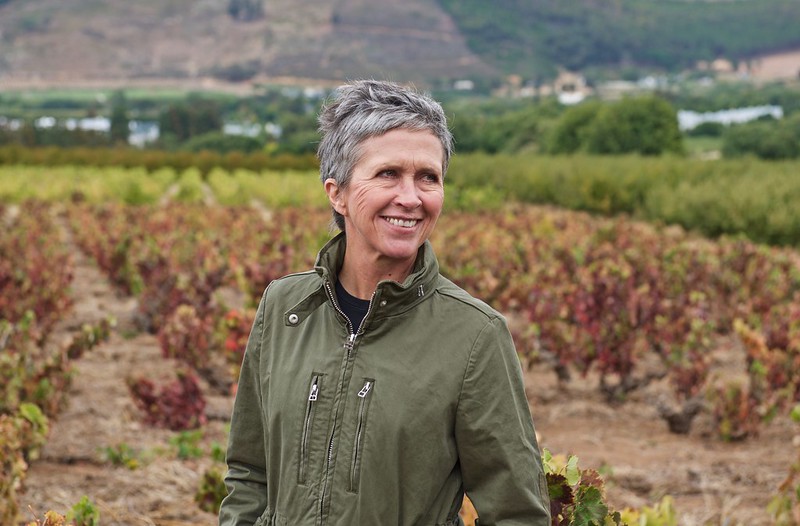 The air inside Rosa Kruger’s 4×4 is turning blue with expletives. Somehow the swear words sound even more forceful in Afrikaans, spat at the windscreen in disgust. This is road rage, South African style, and the country’s most famous viticulturist is visibly shaking with anger. “Fok, man,” she says, pointing to a pile of deracinated vines by the side of the road in Piekenierskloof. “They’ve pulled out one of the oldest Palomino vineyards in the Cape to plant citrus trees. It was on its own roots too. How can they do that to something so beautiful?”

Listening to Kruger, you fear for the farmer who committed such an act of vandalism. This passionate, determined, obsessive woman is perfectly capable of punching someone three times her size. She’s been mugged twice in her life (once by an intruder wielding a machete) and on both occasions fought back and won. Maybe the feistiness is inherited. Kruger is the great, great granddaughter of Paul Kruger, the 19thcentury President of the South African Republic who survived the Great Trek as a child and took on the British Empire in the Boer War. “I’m small,” she says, “but I’m a very strong person. I’m not afraid of anything.”

The woman vineyard workers call “Mevrou” (My Lady) was brought up on a farm in the Northern Transvaal, the second youngest of six children, and retains a visceral attachment to the veld. “If I see a beautiful mountain, I want to walk over it,” she says. With only her dogs for company, Kruger loves to go hiking for days on end, sleeping rough under clear, open skies. “Doing what I do is the perfect job for me,” she says. “I relish the solitude, the space and the chance to work with nature.”

Kruger’s career path didn’t start out like that, mind you. Her first job was as a political journalist on Die Beeld, a Johannesburg newspaper. But after five years she’d had enough of the Fourth Estate and decided to go travelling for six months instead. Back in South Africa, Kruger studied to be a lawyer, but never completed her formal training. She had a young child and, as a single mother, decided that she wanted to bring him up in the countryside rather than a city. It was time to follow the example of two of her brothers and become a farmer instead.

For a year, Kruger managed an apple orchard at Iona in Elgin. When a neighbour suggested that the cool site would also be ideal for planting grapes, she decided to give it a go. With characteristic chutzpah, she got in touch with Eben Archer, the Professor of Viticulture at Stellenbosch University, and asked to meet him. In an attempt to put her off, Archer told her to come to his office at 7am; Kruger was there at 6.45am. With the help of Archer, fellow academic and soil scientist, Dawid Saayman, and Neil Rossouw at Vergelegen, she started to learn about viticulture, using her journalistic training to ask question after question. Her unofficial mentors taught her “80% of what I know”.

Iona’s first release was a 2000 Sauvignon Blanc and established the farm as one of the best producers of the variety in the Cape. But Kruger’s feet were itching again. She left in 2003 to go to Uva Mira, then Cape Point, then L’Ormarins in Franschhoek, where she worked for Johann Rupert for seven years, planting new sites as well as seeking out and sourcing fruit from some of the oldest South African vineyards. It was the perfect way to complete her apprenticeship.

Kruger is her own woman, a person who doesn’t appreciate being told what to do. “I don’t work for the bosses,” she says, “I work with the people in the vineyards and the bosses don’t always like that.” So when she left L’Ormarins, going freelance was the natural progression. She chooses her clients with care and divides her time between seven producers (Boekenhoutskloof, Fairview, Gabriëlskloof, Mullineux & Leeu, Reyneke, Rupert & Rothschild and Twee Jonge Gezellen) as well as acting as an unpaid adviser to most of the best young producers in the Cape, including Eben Sadie, Chris Alheit, Duncan Savage, Donovan Rall and Jolandie Fouché.

More importantly, she often finds grapes for them too. “I sometimes come across vineyard blocks that are too big for my clients, so there are twenty people I can call to tell them about the opportunity. If I help people it’s good for the industry, but it also means I control the vineyard.” How does she choose her shortlist? “They have to have integrity, I have to trust them and they must be really good winemakers.”

They must also be passionate about terroir. “90% of winemakers in South Africa don’t give a shit about viticulture. You ask them if they’ve started pruning and they say ‘I’ll check with the labour’. Most winemakers are extremely arrogant and arrogance stands in the way of greatness. Whenever you think you are good, go and learn some more about your vineyards.”

She’s especially critical of the refusal by many winemakers to do something about leaf roll virus, the viticultural scourge of the Cape. “You look at a place like Stellenbosch and the majority of the vines are infected. Why don’t people replant with clean material and run their vineyards properly? The healthier the soil and the plant, the better the wine. You can’t bullshit your terroir.”

Talking of Stellenbosch, the traditional heart of the South African wine industry, Kruger believes that there are plenty of good sites to be discovered and developed elsewhere in places such as Rawsonville, Slanghoek, Oudtshoorn and Ceres. “There is so much diversity, so much potential in this country.”

This doesn’t mean she has it in for old vines. In fact, quite the opposite. Kruger was the first person to publish a regularly updated list of the Cape’s old vines, fighting to save them from neglect and bulldozers. These venerable plots are a precious resource, as only 3,500 out of South Africa’s 93,021 hectares of vineyards are over 35 years’ old. “I’m trying to get the message out that the Cape isn’t all about bulk production,” she says, never missing an opportunity to talk about old-vine Semillon, Chenin Blanc, Cinsault and Grenache.

In 2016, she founded the Old Vine Project, formalising her work with the aid of a grant from her old boss, Johann Rupert. The OVP is now mostly self-funded though the sale of plaques and bottle seals. More importantly, it holds tasting all over the world and has tirelessly promoted the qualities of the Cape’s old vines. It now has more than 80 members and has become a driving force in the South African wine industry.

Out in the vineyards, Kruger works alone, but recommends other specialists. “I use the best people – a soil scientist, a civil engineer, a land surveyor, a vineyard contractor and so on – but we are all freelance.” Kruger makes special mention of her vineyard team, run by the towering Sheldon van Wyk. “Unskilled labour is one of the biggest problems we have in the Cape. Sheldon employs 40 people and they are the best in the industry.”

Hers is a punishing, but rewarding life. Kruger leaves her home in Riebeek-Kasteel in the Swartland at 6am most days, having checked a few weather sites, packed her vineyard hammer, sun cream and a dozen different hats and called in at the local coffee shop for a latte. She drives 6,000 kilometres a month and knows every inch of the Cape winelands. It’s rare for anyone to occupy the passenger seat. She doesn’t have an assistant and turns down numerous requests from students who want to shadow her or work for free. “I will help people, but that’s it. This is me. There is no succession. When I go, I go.”

What makes her so good at her job? It’s a combination of intuition, observation, experience and a natural aptitude for growing good grapes, as well as an acute palate. Kruger has no formal qualifications – she calls herself a vineyard manager rather than a viticulturist – but she seems to have a sixth sense around vines, treating them as individual entities rather than blocks of plants. She also thinks that science isn’t everything. “It’s not about what you learn, but about what you feel when you stand in a place. I’m very romantic about the way I do things.”

It wasn’t always easy to be taken seriously. The fact that she is a woman – albeit a pretty tough one – was difficult too. “You have to get people to believe and trust in you and they were suspicious at first.” She says that being an Afrikaner helps, given that she can speak to most of the growers in their first language. I suspect that being a Kruger gives her some extra kudos with the volk, too. Oom Paul’s great, great granddaughter is almost Afrikaner royalty.

The country is lucky to have someone local wine writer John Platter has described as “the warrior queen of South Africa’s modern wine makeover”. Since she abandoned the law, she’s had a dramatic influence on the industry in the space of less than two decades. Kruger is in her late fifties now, but remains as fit and energetic as someone half her age. She says she won’t be a vineyard manager for the rest of her life, but it’s hard to imagine her doing anything else. “I always think I can know more and understand my sites better,” she says. “My work is never complete.”