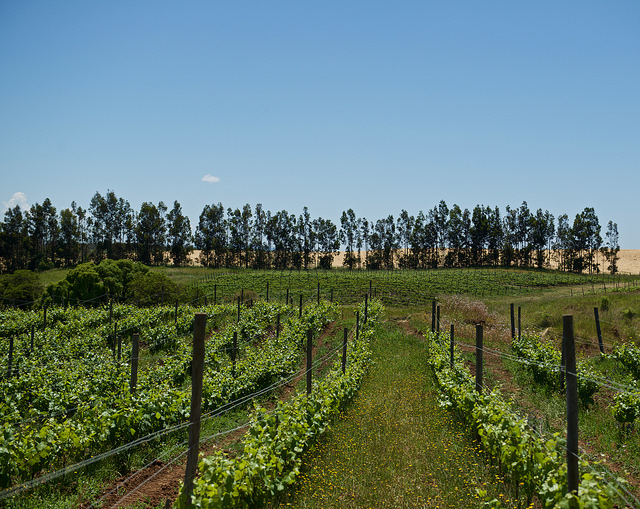 The samples didn’t look very special, to be honest. Bottled in the sort of thing they ask you to fill in doctor’s surgeries, they’d arrived by plane from the south that morning, courtesy of Fernando Almeda of Miguel Torres Chile. The reality was considerably more exciting than the makeshift package, however. I was about to taste the first releases from the world’s most southerly vineyard.

Chile, Argentina and New Zealand are always arguing over vinous proximity to Antarctica, but the Keóken project removes any doubt for now. The vines established by the Instituto de Investigaciones Agropecuarias (INIA), close to Lake General Carrera in Chile Chico are located at 46.32° south and no one, not even Chubut or Central Otago, can argue with that.

I haven’t seen the vineyards, except in photos, but Fernando had been there that very morning and said that they looked healthy and well established at eight years old. That enormous body of water – Chile’s biggest – and the fact that the region of Aysén is on the eastern side of the Andes, enjoying a degree of protection from the cool waters of the Pacific Ocean, seem to have created a microclimate in which grape varieties can not only survive, but flourish.

But what about the wines? We twisted the caps on those dark brown bottles and poured a precious glass of Sauvignon Blanc and Pinot Noir, both from the 2017 vintage. The first reminded me of something from Elim in South Africa, that continent’s most southerly wine area, all green herbs and crunchy acidity. The second was fresh, tangy and savoury with gentle red berry fruit. Both were enormously promising first releases.

A few days later, I was at Viña Santa Carolina in downtown Santiago, where another surprise awaited me. Oenologist Andrés Caballero pulled out a white called Vino del Desierto, made from a native grape called Tamarugal on the edge of the Atacama Desert. This is another wine created by intrepid academics, this time from the Universidad Arturo Prat (UNAP) in nearby Iquique. It was also more than acceptable, with a salty tang and a grapey, Muscat-like perfume. With the help of Santa Carolina, Tamarugal is set to reach a wider audience.

To drive the 3,795 km from Iquique to Chile Chico would take you 42 hours according to Google Maps. To put that distance in context, it would be like travelling from London for Senegal. These, for what is surely the foreseeable future, are the northern and southern outposts of the Chilean wine industry. Only Australia’s vineyards have a greater geographical spread.

Talking of the Antipodes, the UK wine trade used to be obsessed with finding the “next Australia”. By that, it meant a country that made a wide variety of styles, hitting mass market price points but also producing fine wines, too. South Africa probably comes closest to that description – it can produce everything from sparkling to fortified wines – but Chile, increasingly, has the potential to surpass it. Nowhere in South Africa is as cool as Chile Chico, nowhere as dry (1mm of rain per year), even in the middle of an historic drought, as the Atacama.

Five years ago, I couldn’t have imagined myself getting so excited about Chile. As people never tire of reminding me, I was the person who described the place as “the Volvo of the wine industry”. But I’ve just spent three weeks there tasting over 1,000 wines, covering more than 3,000 kilometres of my own, and the place is buzzing with new wines, ideas and terroirs. Now I’m going back every year.

Iquique and Chile Chico are marginal in more than one sense, making tiny quantities of wine in extreme places. But there are plenty of new (or newish) projects that are crafting commercial quantities of outstanding wine, from Ventisquero’s Tara in the north to Casa Silva’s Lago Ranco in the south, Montes’ Outer Limits in the west to Viñedos de Alcohuaz in the east. This last project, high in the Andes at the top of the Elqui Valley, is surely one of the great vineyards of the world. It released its first wines in 2011.

What Chile has lacked in the past has been a wealth of small, young, independent producers. It is a famously consolidated industry, with a handful of large companies dominating sales. Those big companies are doing interesting things of their own – Viña Santa Carolina and Vino del Desierto is one example – but the small guys are finally adding the sort of energy and excitement that are a feature of the South African wine scene, thanks to groups like MOVI (Movement of Independent Vintners), VIGNO (Vignadores de Carignan) and the more left field Chanchos Deslenguados, most of whom make natural or “taboo-free” wines.

Chile used to look with envy across the Andes to the greater varietal mix available in Argentina, but that’s changing too. On my recent trip, I tried wines made from Albariño, Roussanne and Verdejo, as well as Barbera, Cinsault and Mencia. And in regions like Itata and Maule, Chile is making the most of its traditional varietes: Muscat, País and Semillon. And who knows? There may be a future for Tamarugal too.