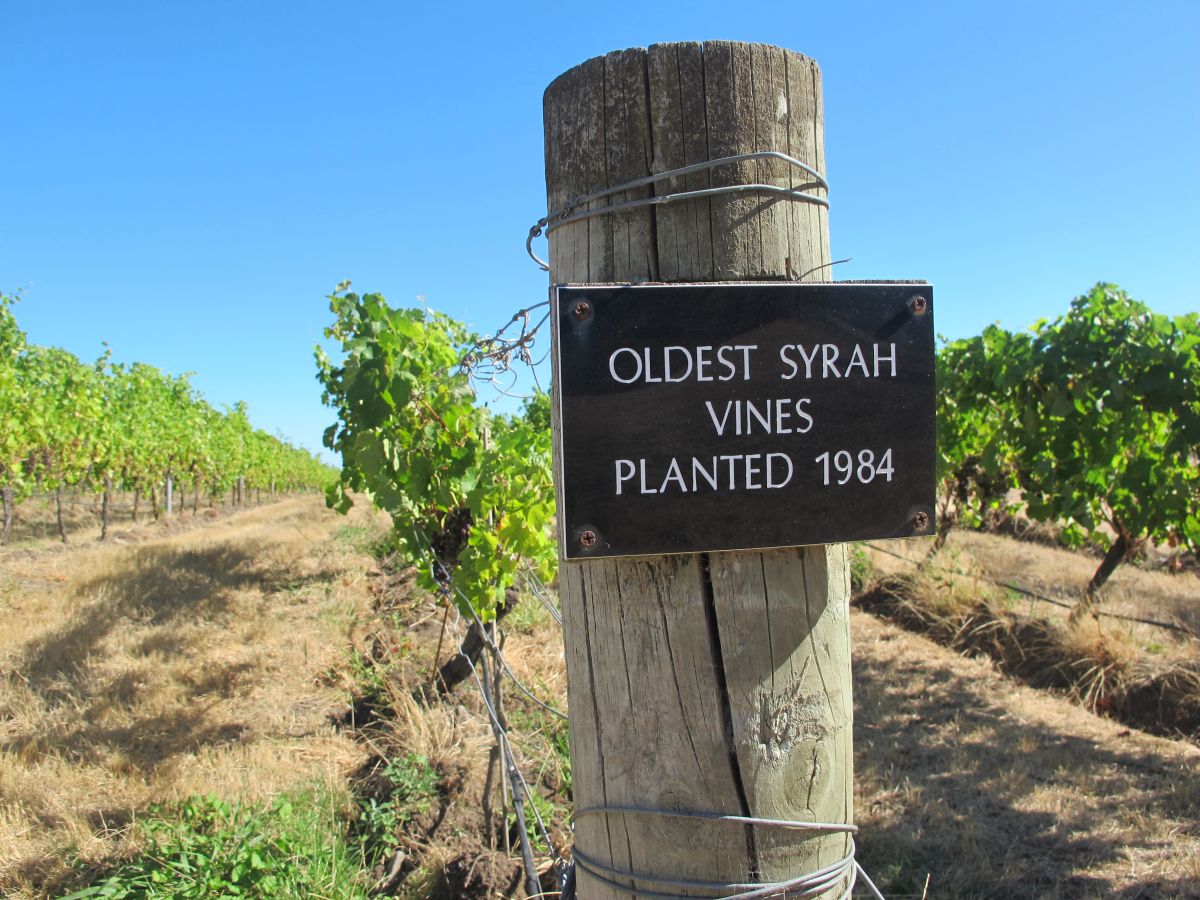 In 1984, a man called Dr Alan Limmer was doing some work at a government viticultural research station on North Island, New Zealand. One day he heard it was about to be closed down due to lack of funds and the vineyards bulldozed. He raced over there to see what he could salvage. He rescued nine Syrah vines from the bonfire – the only ones in the country at that time. They still had plastic name tags around them like babies’ ankles. He took them home and planted them in his own estate, Stonecroft, in Hawke’s Bay. These original vines are still there today, bearing fruit and providing cuttings. No-one knows for sure how Syrah came to be established in its heartland of the Rhône – but we can be reasonably sure it didn’t turn up in a cloud of dust in the back of someone’s ute.

The New Zealand wine industry may be young, but it has quickly become something of a talent hothouse for French grape varieties; first Sauvignon Blanc, then Pinot Noir. Syrah has taken a little longer to find itself, but it appears to have finally found its voice.

When it comes to red wine in New Zealand, Pinot Noir dominates the scene with 70% of plantings. After this comes Merlot at 16%, but plantings are shrinking as the results are rarely distinctive. Syrah comes in third at just 6% of plantings, and this figure is rapidly increasing as its potential becomes clear. It has spread from its Hawke’s Bay homeland to all the principal New Zealand wine regions and it’s already showing identifiable regional and even sub-regional styles; Hawke’s Bay, Waiheke Island, Martinborough and Marlborough are the regions to know.

Three quarters of Syrah plantings are found in Hawke’s Bay. This is the fruit basket of New Zealand, warm and sunny, with most of the vineyards found on the flats that spread inland from the sea. The meandering paths of four rivers have laid down diverse soils. One sector of deep gravelly stones has a particularly inglorious CV; previous occupations have been a rubbish tip and a drag strip – it was too infertile even for grazing sheep. This was until someone thought of growing vines on it – and since then it has revealed itself as one of New Zealand’s most promising terroirs. This sub-region is known as Gimblett Gravels.

Trinity Hill is one of its stand-out Syrah producers. It was established by Robyn and Robert Wilson, owners of the Bleeding Heart restaurant in London, and their friend John Hancock, an Australian winemaker. He worked a vintage with Rhône legend Gérard Jaboulet in 1996, and brought back a cutting from one of Jaboulet’s best Hermitage vineyards. Their top Syrah, Homage, is a tribute to Jaboulet who died the following year. Although the region is responsible for some well-regarded Bordeaux blends and Chardonnays, Hancock believes that “we can own that spicy, peppery style of Syrah, and that’s probably what’s going to make Hawke’s Bay’s name internationally”.

Warren Gibson is head winemaker at Trinity Hill, and also makes wine with his wife Lorraine Leheny under their own Bilancia label. That addictive peppery Syrah signature is emphasised in many of New Zealand’s best Syrahs, and none more so than with Bilancia’s La Collina Syrah 2013. Hawke’s Bay is the opposite of the Rhône in that the vines are largely grown on the flat rather than the hillsides; this steep vineyard is one of the rare exceptions to the rule. It’s an experiment that has paid dividends. It was made without destemming (using a proportion of stems in the ferments is common practice with New Zealand Syrah), which has added to an exuberant fragrance that would give some Côte-Rôties a run for their money.

With 60 hectares under vine, the second largest region for Syrah in New Zealand is Auckland & Northlands, in particular the small island of Waiheke, 10km to the east of Auckland itself. It’s a beautifully picturesque spot, green and hilly with peaceful sandy bays. There are 29 small wineries on the island; Man O’ War Vineyards is the biggest by far. “We don’t feel like we need to be part of the Pinot Noir conversation,” says winemaker and chief executive Duncan MacTavish, “Syrah has been going from strength to strength. We can’t make enough.”

A vertical tasting of their Dreadnought Syrah shows that the 2012 vintage was a turning point. They stopped acidifying, started using a proportion of stems and lengthened the wine’s time in 500l barrel from 12 to 24 months. The jump in quality could also partly be down to vine age. As vines mature, MacTavish is noticing “we’re moving into subtleties, not just blasts of fruit”. This bodes well for the future, and not just for Waiheke.

Waiheke isn’t quite as sunny as Hawke’s Bay, and it’s relatively humid; there’s less of a difference between night and day temperatures too. This climatic difference, coupled with heavy clay and volcanic soils, leads to a different style of Syrah. It’s bigger and bolder, with polished dark fruits, somewhere between Syrah and Shiraz. Passage Rock and Hay Paddock are other names to watch.

The tiny town of Martinborough is found close to the southern tip of the North Island, 65km east of New Zealand’s diminutive capital city Wellington. It’s home to 1,600 inhabitants who live in a collection of pretty one and two storey wooden houses centred around a central square laid out like the Union Jack. The town is hemmed in by some of New Zealand’s best Pinot Noir vineyards; no producer yet hangs their hat on Syrah, but there are some highly promising examples now cropping up.

One of the most distinctive is made by Kusuda Wines. During his time as a law student in his native Japan, Hiroyuki Kusuda took some time out to backpack around Europe, developing a love of wine along the way. He finished his law studies back home and got a job, but his interest in wine grew until he couldn’t ignore it any longer; wine fought the law and the wine won. In 1997 he learnt German and left to study oenology and viticulture in Geisenheim University. His thesis on New Zealand Chardonnay eventually led him to Martinborough, where he eventually returned to rent, then eventually buy, some vineyards. He makes Pinot Noir, Syrah and Riesling. His production methods for Syrah are “much like Pinot, but with more air”, and it shows. It’s an unshowy, neat style of Syrah, with a sunny vibrancy and intense freshness.

There are only 10 hectares of Syrah in Martinborough, and Kusuda doesn’t expect this to increase since the area is wedded to Pinot Noir in the minds of both producers and consumers. But there are several other examples worth tracking down: Martinborough Vineyard makes a juicy, pretty Syrah cofermented with 4% Viognier; Dry River’s Lovat Vineyard Amaranth is a fuller-bodied, more textural style with expressive aromatics; and Ata Rangi has just started bottling a pure Syrah called Juliet from the 2013 vintage. On tasting it from barrel, winemaker Helen Masters saw “for the first time what I always thought Martinborough Syrah should be”. It’s a beautiful wine that demonstrates that Martinborough has the potential for world-class Syrah.

Marlborough has 19,047 hectares of Sauvignon Blanc. When the renowned soil scientist Claude Bourguignon visited Fromm Winery, he told them they should actually be growing Syrah. To their credit, they ignored their neighbours and heeded his advice; their Fromm Vineyard Syrah is a beacon of Syrah in a sea of Sav. Their 1999 is glorious and still going strong.

As the valley floors of Marlborough become fully planted, it’s the land at the fringes that’s in the sights of many wineries. Happily, the hills to the south of the Wairau Valley with their clay-rich soils are proving to be good sites for red varieties. The Clayvin vineyard is only the second hillside vineyard to be planted in Marlborough, but the wines grown here from both Fromm and Giesen show great promise.

There are now 10 hectares of Syrah in the region, the same as Martinborough. Both regions are relatively cool for successfully ripening this variety, but the style is different. Martinborough tends towards a floral yet savoury medium-bodied expression; Marlborough tends towards a slightly lighter, more peppery example. With the Marlborough name so strongly connected with Sauvignon, it’s unlikely that Marlborough will ever be a major hotbed of Syrah. Anna Flowerday of Te Whare Ra explains “the potential is pretty huge, but at a premium price… it’s always going to be the small independent wineries.”

New Zealand has developed a unique national style of Syrah that makes total sense within its broader wine lexicon and cuisine. If Australian Shiraz has traditionally emphasised the variety’s black fruit flavours, weight and depth, then New Zealand Syrah underlines its red fruit register, acidity and fragrance. What makes it truly exciting is the way that it’s already expressing subtle but marked stylistic variances across different regions and vintages.

Thanks to their upfront aromatics and bite, New Zealand Syrahs are rarely low on impact. What they occasionally lack is weight and length of fruit on the palate, and their tannic frame can sometimes be fairly slight. I’m confident that this will naturally (if slowly) be addressed as vines mature. Occasionally winemakers are overly keen with new barrels and overgenerous with the Viognier used in blends, but these issues are quicker and easier to rectify.

Many of the wines aren’t just good, they have the breezy character and flawless looks of the Hollywood child star. I’m looking forward to seeing how these wines develop on a producer level; the lines and scars, the characterful asymmetries the unapologetic quirks. One of my favourite vintages in the Rhône is 1983 – those first Stonecroft vines weren’t even planted then. New Zealand Syrah has come a long way in a short time, and its adoptive country is proving to be a natural and exciting new home.