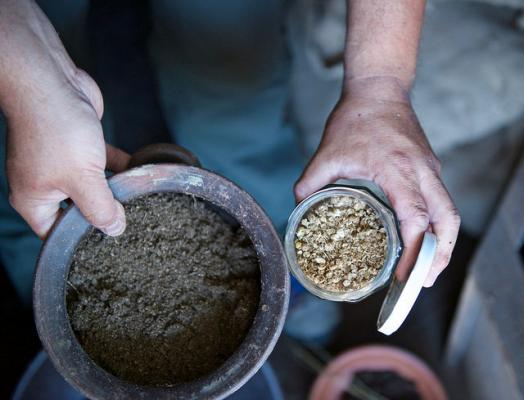 Wine lists can be difficult for the uninitiated to understand. One restaurant in Los Angeles, Hatchet Hall, has taken this a step further: not only is their list incomprehensible to the general public, it’s incomprehensible to anyone who doesn’t work there. Rather than name producer, region, vintage and grape variety as is normal they’ve come up with cryptic descriptions such as “Ham wine” or “Vieilles Vignes (old vines) 13”. It’s more like a crossword puzzle than a menu. The whole thing smacks of an in-joke but it actually serves a very serious purpose. It means that the even the most wine literate diner needs someone to decode it for him. It’s the latest salvo in the ongoing battle to keep wine unintelligible.

In the past wine knowledge was linked to class. This is why it lends itself so well to British comedy, which is often about social status. Think of Basil Fawlty saying to an upper class guest at the hotel: “It’s always a pleasure to meet someone who appreciates the boudoir of the grape. I’m afraid most people we get here don’t know a Bordeaux from a claret.” This link between class and wine knowledge began to unravel with the rise of American super critic Robert Parker in the 1980s. He not only pronounced in an authoritative fashion on wine but he scored them out of 100. Many decried this a philistinism, asking whether you would score a Velázquez or a lover, but wine buyers loved it because it simplified or seemed to simply wine. Armed with a bit of Parker, the average wine drinker could now begin to navigate his way around a wine list. Sommeliers and merchants were still useful, but customers could always appeal to a higher power like the European Court of Human Rights. Yes, you like it but what does Parker think?

In the 1990s and 2000s, the public became better informed and wine democratised. Supermarkets began selling classed growth Bordeaux off the back of Parker scores. With one super critic in place and good wine seemingly available everywhere, the professionals were losing their grip. Something had to be done. The answer was “natural” wine. This was ostensibly a reaction against the sort of wine that Parker liked, powerful, oaky wines made in a Bordeaux-meets-California style. But just as important, the producers were obscure and you couldn’t buy the wines in Oddbins. A new generation of writers, sommeliers and merchants staked their claim as keepers of arcane knowledge. Visiting a wine shop or bar now became like visiting an independent record shop. Asking for a wine Parker liked would be like requesting a Dire Straits record in Rough Trade.

Nowadays there’s a whole network of bars, shops and restaurants in London, New York and especially Paris selling “natural” wines. A further advantage of these wines from the perspective of the initiated is that some of them taste awful, but they are meant to taste like that. So when customers try to send them back, they can be put in their place with a “you just don’t get this wine, man.” It saves on wastage, as nobody knows if a wine was faulty or not. With Parker retired, sommeliers have become the new trendsetters. When Wine Australia launched a campaign to convince the public about the merits of premium Australian wine, they didn’t do it through retailers, they put on tastings for sommeliers.

But this power is under threat from technology. In 2003 a website called Cellartracker was founded by an ex-Microsoft man called Eric LeVine. Here members of the public log the wines they have tried and rate them out of hundred. We are all Parker now. There are now nearly 4 million notes and around 290,000 registered users. It really came into its own with the development of apps such Vivino,  where you can scan wine labels and automatically link to reviews. The savvy wine lover can now bypass the professionals entirely. Hence the Hatchet Hall website. It was designed to be smartphone proof.

Sommeliers need not hang up their spittoons just yet, because they have an ace up their sleeve: matching food and wine. It isn’t a coincidence that as public wine knowledge grows, this has become increasingly elaborate with tastings menus with a wine for each course. Wine writers devote columns to the quest for the perfect wine to go with chicken tikka marsala. There is an element of pseudo science about the whole thing. Putting wine and food together is such a personal matter: one man’s match might be another person’s clash. For the customer, it adds another element of uncertainty which is of course just what the experts want.

I’m not saying that wine is straightforward. It is an immense subject and changing the whole time, you can now buy wines from Croatia, Georgia and Greece at Marks & Spencer. And most wine professionals do do their best to illuminate, but the truth is we don’t want people to find things too straightforward. This ongoing battle between the public and professional knowledge reminds me of a passage from Sellar and Yeatman’s 1066 and All That: ‘Gladstone spent his declining years trying to guess the answer to the Irish question; unfortunately, whenever he was getting warm, the Irish secretly changed the question.’