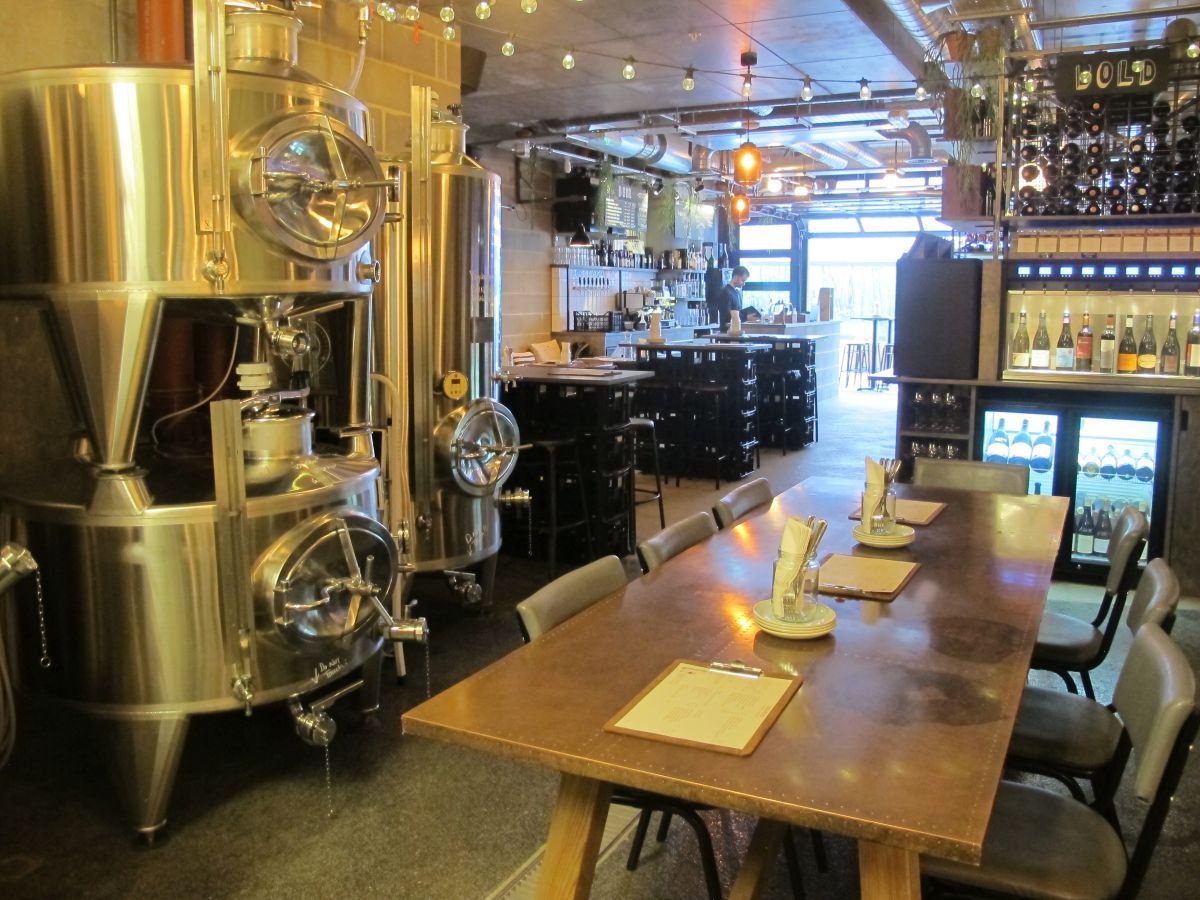 The UK is home to over 400 branches of Nando’s. Greene King runs over 3,100 pubs and restaurants. There are over 2,300 Costa cafes; 12 in Chelmsford alone. We British love a chain. So why are there so few sizeable chains of wine bars? Only three spring to mind with over 10 outlets: Davy’s, All Bar One, and newcomer Veeno. How do they compare, and is it even possible to create a large chain of wine bars that can please casual drinkers and wine geeks alike? I paid them all visit, along with some of their smaller competitors, to find out.

When I finished my A-levels I worked as a cook in a Davy’s restaurant called The Crypt in Oxford. I have many fond memories: walking proudly past tables of satisfied customers, tasting Port for the first time, strolling past a couple having full sex on a chair in a darkened corner of their work Christmas party… It has long since closed its doors, along with all their other sites outside London, but they still own 22 bars in the capital, the five El Vino wine bars they bought in 2015, and their wine merchant business, established in 1870.

I paid a visit to The Boot & Flogger down a quiet side street in London Bridge, which they describe as ‘London’s first real wine bar, opened in 1964 by John Davy’, and it hasn’t changed much since then – it has more wooden panelling than you can shake a pewter tankard at. Like many Davy’s wine bars, it has a crepuscular air (like much of its grey-haired clientele on my visit), accentuated by the candlelight and polished brass. The brand projects an idealised traditional British past, the atmosphere is one of sedate conviviality, a kind of rosy-cheeked Dickensian hygge.

It’s still a family business, and it feels like it; service is kindly and personable. The everyman menu has a home-cooked feel – my roasted Scottish salmon, fennel braised potatoes and tomato herb sauce (£16.95) was ample, competent, tasty, though cooked without undue flair.

The main wine list has around 50 listings, mostly between £20 and £40, with a few additional top-end fine wines. Though it doesn’t get the wine geek’s pulse racing, the list is varied, offers over thirty wines by the glass, is fairly priced and has an heartening selection of fortified wines. With an intentionally limited beer and spirits offering you can see that wine is genuinely appreciated here, even if the locals’ tastes veer towards the conservative.

It’s hard to imagine a London without Davy’s Wine Bars – they’re part of the furniture. Their wine lists could be more exciting, but this venerable company serves its market well and is no doubt somewhat tied to its demands. Happily, they’re branching out with bars such as their Wine House in Holborn, which features banks of Enomatics and a more modern feel. But they are content in their London heartland for now; owner James Davy explains “as a very Central London-based business Davy’s Wine Bars still have room to explore Greater London before considering anything further afield.”

The first All Bar One opened in Sutton, Surrey, in 1994. They now have nearly 50 dotted around the country. They proudly claim to have ‘Wine Ambassadors in every bar trained to WSET level’ and appear more wine-focussed than competitor bar chains like Slug and Lettuce. I visited their new Waterloo branch, in the shadow of the London Eye. It’s spacious inside, with wooden floorboards, exposed brick, brown leather banquettes; the clean, necessarily anonymous interior of the national drinking and dining chain. The soundtrack consists of women with pianos and men with guitars. It’s what Yates’s Wine Lodge aspired to be in the 90s before they removed the two last words from their name and embraced their destiny of confectionary-flavoured shooters and casual violence.

It’s a Friday lunchtime in a prime site, and the place is busy – it took me several minutes of wandering around and standing at the bar to get anyone’s attention. Most wine bars would kill for his level of trade, and it gives the place a buzzy atmosphere. But most people are drinking lager.

The wine list isn’t long: 19 whites, 16 reds, 5 rosés, 10 sparklings, but it’s been smartly laid out and most are available by the glass. The whites are divided into three sections by style, and then a further three sections within each; ‘trusted’, ‘tempting’ and ‘our best finds’. I tried three. A fresh and balanced MJ Janeil Gros Manseng Sauvignon Blanc (France, £7.40/175ml); a sweet and simple Casa Lia ‘Rag Doll’ Pinot Noir (Chile, £6.35/175ml) and – through ghoulish curiosity, I admit – the Grape Gatsby Pinotage Viognier (South Africa, £5.75/175ml) which was actually worse than my most dour expectations.

The food menu consists largely of anglicised international dishes with a nod to what’s fashionable. I opted for two small plates; buttermilk chicken wings with a Korean BBQ sauce (£7.50) and a lobster mac & cheese (£6.95). It’s tasty fast food, designed with flavour rather than nourishment in mind, and left me craving exercise.

There are some well-known producers on the wines list: JM Brocard Chablis, Henri Bourgeois Sancerre, Mount Langi Ghiran, Yealands. But, as I discovered, you can buy some very bad wines here. And the wine list has no vintages – which you could argue makes sense for a mainstream bar – but the availability of 250ml measures doesn’t do anyone, or the wines, any favours. Rather than wine bars, it feels fairer to describe All Bar One as a chain of upmarket pubs.

Two Italian friends living in Manchester, Nino Caruso and Andrea Zecchino, decided to go into business together to share their passion for food and wine. Caruso’s family owns Caruso & Minini, a 120-hectare wine estate in Sicily, so it made sense to open a wine bar. The first Veeno opened in Manchester in 2013. Within five years they have an impressive 18 locations around the UK and are continuing to expand rapidly – Caruso aims “to cover most of the UK with 50 sites and more”. I visited their only London site to date, opened in late 2017, near St Paul’s Cathedral.

Trying to bring a distinctive feel to a first-floor unit in a modern commercial development isn’t easy. Installing low wooden beams has helped, as has lining the walls with bottles. The boxed wine lining some shelves might not speak to the local City traders, however; nor, I suspect, will the soundtrack of emotive Italian hits. Other sites, such as their branch near Leicester Cathedral, feel more characterful.

Both sites have pleasant waiting staff who know little about wine, and managers that know a bit more.

Wine occupies half the drinks list. All are sensibly given nicknames (The Elegant, Our Best Seller, Our Driest) which helps customers select the right wine and avoid difficulties with pronunciation. There are just over a dozen reds, a dozen whites and half a dozen sparkling options. Most are between £20 and £40 with a few top-end options (prices depend on site; they often significantly cheaper outside London). Most are available by the glass (175ml or 250ml) and there are various flights and food matching options.

That the winery is in the family no doubt brings certain cost savings. They can afford to offer a lunchtime deal of a panini or salad including a glass of house wine, beer or prosecco for as little as £7. I opted for the Caprese salad at £9. The buffalo mozzarella was good; the accompanying tomatoes were pale orange in colour, cold and tasteless. A seasonal menu no doubt brings complexities to a nationwide chain, but it helps avoid disappointments like this.

But there are drawbacks to being tied to one main producer – a flight of three reds wasn’t expensive at £14 for three 70ml glasses, but the quality wasn’t always good enough. Their Sicani Nero d’Avola was the best, a decent, drinkable example; but at £29 a bottle it’s overpriced.

Veeno is our only nationwide wine bar chain, and I was hoping it would be better. Opening in London is risky; the competition is fierce. But staff training, a seasonal food menu, a more liberal buying strategy and gearing branches to their individual local markets could make all the difference.

Out of the three chains I visited, All Bar One aren’t strictly wine bars, Davy’s are only found in London and Veeno has room for improvement. So, is it even possible to establish an outstanding nationwide chain of wine bars? Two of London’s best smaller chains – Vagabond and Humble Grape – think it is.

James Dawson opened the first Humble Grape in 2015, and now there are four dotted around London and he’s aiming for 10 to 12 over the next 2 to 3 years – with possibly more after that. He believes there aren’t more large chains because “wine probably hasn’t got the broad appeal that beer has… it’s a complex product that appeals to a smaller number of people.”

He thinks that “if wine continues to grow in appeal” then we could well see a nationwide chain of wine bars establish itself, particularly if people continue to drink less, but better – a growing trend he’s witnessed in his own bars. “We see people being more and more educated about wine, particularly young women,” he says, many of whom “know the difference between Pouilly-Fumé and Sancerre.” He believes the key would be to develop a brand that appeals to all levels of wine knowledge, from those who don’t know about wine right up to proper wine geeks – something our current large chains have failed to achieve.

Vagabond opened in 2010 and now has six locations around London. Their latest move was to employ talented winemaker Gavin Monery to make Vagabond branded wines in Limoux, Stellenbosch… and even a range of English wines on-site in their Battersea branch. Most will have a drink-in price of £26.95, and having tasted two of their English wines, they should fly. Managing Director Stephen Finch says “I can see the potential for a couple dozen [more Vagabonds] over the next several years.”

He thinks there are so few wine bar chains currently because “it’s still a relatively young market. Wine bars went out of fashion post-80s, and only started coming back (with a bang, admittedly), in the past five years or so. It takes time to scale things up… The winner will be whoever can master the business side of things – organisational, financial, legal, etc. – while not diluting what customers love about them.” He says he can envisage a successful nationwide chain of 50-100 outlets: “Remember it’s not just London. And it’s not just the major cities. There are a lot of vibrant market towns too.”

Both Humble Grape, Vagabond and other top London chains such as Vinoteca have proved that they can happily manage half a dozen sites. Their strength is that they are built around a genuine understanding and love of wine. And they strive for quality in all areas – not just wine, but food, décor and service. But for all this, you have to expect a bigger bill at the end of the meal compared to Davy’s or Veeno. Will one be able to successfully expand outside of the capital? Looks like we’ll find out.

Note: I spent approximately the same amount (£40) in All Bar One, Davy’s and Veeno, all of whom kindly covered the cost of the visits, which were conducted anonymously.