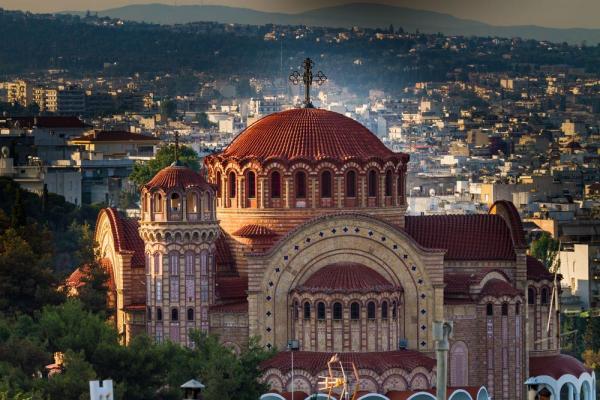 Every oenophile probably has that one moment of public blind tasting when it All Goes Right. Mine came sometime in the mid-noughties at the rooftop bar of the Athens Hilton. I was rushing to meet friends after a long day at work and already thinking of my gin and tonic. On arriving at the table, however, and before even taking my seat, I was presented with a wine glass and a challenge.

“Oh, you will never guess what they have here by the glass.”

I was looking forward to an evening of singing sagas of bureaucratic entanglement, not performing party tricks. There was little light, and people around me were smoking. This would have to be quick. I gave it a short swirl ’n’ sniff. “Well, Château Julia Merlot, obviously.” Then a quick taste. “Two thousand and two.”

I’m told that today you end such stories with mic drop.

Naturally, what appears to the outsider as a gustatory feat is every bit as much a product of deduction. Keeping accurate tasting notes and drinking the stuff by the bucketful helps of course, but one needs a place to start. In that case, things were relatively simple. My friends would have ordered something Greek, as foreign labels would be wildly overpriced; the bar’s Greek offerings would need to be of a certain standard and interest, highlighting the new local wine scene. They would also need to cater to an international clientèle and offer a familiar grape for the foreign customer to latch on to, amongst the alphabet soup of producers’ names. That narrowed it down to around ten producers and about twenty labels. Identifying the right one from there was just a short hop.

Conventional wisdom has it that Greece is the home of ancient, unique varieties with unpronounceable names (“so you say it’s not zai-no-MAH-vro?”), its USP in the ultra-competitive global market its largely unexplored terroirs. This is partly correct: the country does indeed boast ancient varieties and some unique terroirs – and the names don’t exactly roll off the foreign tongue. But, starting in the mid-nineties and for the best part of a decade, the best Greek reds were made of nothing more exotic than the usual suspects from Bordeaux and the northern Rhône.  And the bulk of this new quality wine was made not by the big producers in the country’s traditional red hubs of Naousa and Nemea, but from a band of mostly young winemakers that found gold in the north and north-east of the country. Ambitious and innovative, they taught their countrymen to drink international varieties and contemporary styles, bringing Greek wine to international attention in the process. The days of oxidised whites and thin reds were about to be left behind.

Two areas starred in that mini-revolution: the first was Epanomi, right outside Thessaloniki, Greece’s second city*. Bordeaux-trained Vangelis Gerovassiliou became known domestically as the winemaker of the venerable Domaine Porto Carras, where his 1994 Syrah was arguably the first Greek Syrah of international calibre. When he moved on to his own estate in 1999, he produced a Syrah-led blend for his “Ktima” red that has been an industry standard ever since. I have always found it one of the most approachable Greek reds and one I recommend to friends who might want a smooth introduction to Greek wine. It is supple but intense; food-friendly, but drinks nicely on its own; enjoyable on release, yet having good ageing potential. A recently tasted 2011 feels half its age; Yannis Karakasis MW, tasting the 2001 last year, found it Saint-Emilion in style with some years still ahead of it.

Things were even more exciting further to the east, in the area around the Pangaion mountain, near the small town of Drama. Biblia Chora, Wine Art Estate, and the estates of the Lazaridis brothers (Nico and Costa) created a mini-hub, doing the Médoc with a heavy Greek accent. All the standard bottlings are still going strong. The Ktima Biblia Chora**, Techni Alipias**, and Amethystos** reds all have a heavy presence of Cabernet Sauvignon, with measured spice and a good amount of red fruit. The latter is more generous in Techni, and more restrained in Amethystos, while Biblia Chora has a strong Merlot presence leading to a wine that is a tad softer, with vanilla notes. All have robust tannins in their youth, a bit too rough for Amethystos in some years, making decanting mandatory. Also, they’re all food wines: the traditional Greek beef stew in tomato sauce (“kokkinisto”) is an excellent start, as is the oven-baked beef casserole known as giouvetsi. For a food-optional red, Wine Art Estate produces a very pleasant Merlot under its Idisma Dryos label.

One quality and price level up things start becoming really interesting. Nico Lazaridi’s Magic Mountain and Costa Lazaridi’s Cava Amethystos are both serious reds and, surprisingly for Greece, they star Cabernet Franc (100% in the case of Cava Amethystos), but that’s a Cabernet Franc much more muscular than you know it. Magic Mountain, which also includes Cabernet Sauvignon and in some years a tad of Merlot, is softer and more balanced, but with an extra sprightliness given by the Cabernet Franc. The 2010, tasted last December, is now at its prime. Cava Amethystos is a dark and powerful wine, but requires patience: ten years is the starting point. Also muscular, but altogether more refined, is Biblia Chora’s Ovilos red. This is a 100% Cabernet Sauvignon, but more redolent of California than Bordeaux. The 2011 has started to open, but I would give it two or three years more – and then I would have it with a grilled sirloin.

If you are in the patience game though, I’ll jump back to Epanomi for one more recommendation: Evangelo, a blend of Syrah, Petite Sirah, and Viognier that is Gerovassiliou’s haut de gamme. It is very enjoyable young: the 2013 has a nice balance of granite and spice, and is a good match for roast pheasant. But wait a few more years and you are rewarded with profound aromas of old leather and maraschino cherry, and a texture that is sensuous and silky. The 2011 has just started entering such a phase and in a couple of years more it will be a true vino da meditazione. Just don’t drink it to reminisce over any holidays in Greece: the accent you will hear is perfect northern Rhône.

It is a sign of the increased sophistication of both the local and the international markets that more attention is paid to native Greek varieties. These days Biblia Chora is working with Agiorgitiko, both as a supporting actor in its main wines, and in a 100% label (“Areti”) intended for ageing. More recently, it released Biblinos Oinos, a thick, luscious red from an as yet unidentified and unnamed grape – surely the ultimate hipster wine. Gerovassiliou has long experimented with Limnio, which in more recent years has been added to the blend of the Ktima, but also with Mavroudi and Santorini-transplant Mavrotragano. All three are used for Avaton, a highly distinctive wine, which also lends itself to long ageing. For some, this is the most interesting Greek red, but be warned: its sweet-and-sour notes of black plum do have a Marmite effect on an unsuspecting crowd.

The establishment of the new Greek wine as a legitimate, if small, player in the international scene, means also that there is more interest and space for new terroirs and wineries. For my money, the best Limnio in the country is produced further East, by a small producer, Domaine Kikones. It is an unusual winery with a small production (4-10k bottles for the Limnio, depending on the year), repurposed from a factory originally used to dry mint. Its chief winemaker, Melina Tassou, did her wine training in Bordeaux, including a stint at Smith Haut Lafitte, but the touch here is Burgundian. The 2009 is intensely fragrant, with strawberry and raspberry aromas, while the juice itself is deliciously clear with a medium-length sharp aftertaste; it should have at least three to five years until reaching peak.

This terroir, near the village of Maroneia on the Thracian sea, just 50 miles from the Turkish border, boasts one of the catchiest links with antiquity. According to some scholars, it is the site of ancient Ismaros, from which, if you really really remember your Classics, Odysseus got the wine that put the cyclops Polyphemus sleep. The Tsantali company has used the legend to name its series of wines produced there: it is called Kanenas (“no one”) after the answer Odysseus gives to the cyclops when asked his name***. The red label is an easy-drinking Mavroudi-Syrah blend, which has proven very successful in the local market. For those interested in up-and-coming varieties off the beaten track, Mavroudi should be one to watch, as more wineries are experimenting with it; midway between Pangaion and Maroneia, the take by Anatolikos Vineyards has gotten some attention.

Meanwhile, the hunt for a piece of the more impressionable segment of the international market continues apace. These days, Château Julia Merlot has exchanged the pleasant still life on the label for a, somewhat menacing, single black J. The back label is dominated by the signature of Michel Rolland, and so is the taste: a black fruit sugar bomb of a jammy texture, with which Robert Parker would surely be happy. But maybe it is still used for party tricks by the younger after-work crowd in the smarter bars of the Greek capital.

Gerovassiliou wines are imported in the UK by Hallgarten, Druitt, and Novum, and in the US by Cava Spilliadis.

The red wines of Biblia Chora are imported in the UK and the US by Cava Spilliadis,

Nico Lazaridi wines are available in the UK from The Greek Deli.

Wine Art Estate wines are imported in the UK by ECLECTIC WINES/TKTWCO “THE KITCHEN TABLE”, and by the Kolonaki Group in Canada. There is a range of importers that serve the US market.

Most of the wines mentioned in the article are also available online via houseofwine.gr and greeceandgrapes.com.

* or, as the locals would strongly argue, first.

** roughly translating respectively as: Estate of Biblia Country, the Art of Not Being Sad, and Amethyst. The name “Biblia” is meant to derive from a grape, and the name is encountered in a both Ancient and Byzantine texts. As for amethyst, the name literally translates as “not getting drunk”, a quality Ancient Greeks apparently expected that particular quartz to convey. I am not sure about the mineral, but I can attest that it does not apply to the wine that bears the name.

*** only very tangentially relevant, but the use of “Kanenas”, much like the use “No one” in English, robs the reader of modern translations of the Odyssey of one of the great double entendres of world literature. In the original ancient Greek text, Odysseus answers to Polyphemus “ou tis” (no-man). But when the other cyclopes reach Polyphemus and ask him who blinded him, the structure of the language is such that he must reply “me tis”. This again means “no man”, but it is also a homophone of “metis”, usually translated as ‘guile’. Hence, Polyphemus replies simultaneously that he was blinded by no one, and guile. Now, the land of the cyclopes is usually taken to be Sicily, and the myth is also popular amongst some winemakers there. Vini Biondi produce an Etna Bianco and an Etna Rosso called “Outis”; much like their superiority in language terms, “Outis” are also superior wines to “Kanenas”.