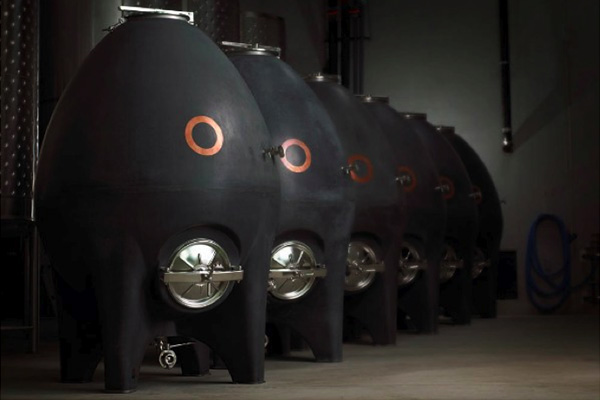 The ISPB – International Society for the Protection of Birds – announced yesterday that it was supporting the  “Get Wood” campaign recently launched by France’s leading barrel-making organisation FAT – the Fédération Artisanale des Tonneliers, and LOUSA Lumberjacks Of USA. Speaking at a press conference yesterday, Cath Artiformes said that her charity was very concerned about the impact the trend towards unoaked wines was having on some of the world’s forests. “The woodland of Troncais, Nevers, Allier, Vosges and Limousin in France and Missouri in the US provide an essential habitat for a wide range of birds, including buzzards and tits.” she said, going on to suggest that “It may not be too much to say that if this tendency is not reversed, the American eagle may become extinct”.

Today, France has just two working cooperages, and one of these has switched most of its focus to producing decorative water butts and containers for plants and flowers. The abandonment of casks by bourbon producers in the US has led to a similar collapse in the North American barrel market, while over 90% of Australian and New Zealand wine is now aged in eggs or stainless steel. “It was all that oaky Chardonnay and Shiraz from the big foreign-owned wine companies that did for our wine industry” declared Hunter Valley winemaker Hedda Intheclouds. “Now, we’ve got rid of all those brands, shrunk production by 90% and are making French-style regional wine in eggs, we’ve got the Australian industry precisely where we want it to be”.

Unwooded wines started to gain a following in the early years of the 21stst century, thanks in part to the efforts of leading UK critics such as Jancis Robinson and Tim Atkin who repeatedly took a stand against what they believed to be the “overoaked” character of some New World wines. For a while, however, the producers of regions like Bordeaux and Burgundy continued to believe that ageing in new oak barrels was important for their wines. It was the financial crisis of 2007-8 that drove many to reconsider their position, especially after the arrival on the scene of concrete “eggs”. With new barrels costing $1000 or more apiece, the eggs – which never need replacing – pay for themselves remarkably quickly, and after the high profile chateau Pontet Canet announced that it had bought an egg, France’s and America’s coopers began to see orders drying up.

A major factor in the move away from barrels has been the rise in popularity of Pinot Grigio and Sauvignon Blanc and, since around 2015, Riesling, none of which is usually aged in barrels. Another nail in the (oak) coffin was the final retirement of wood and bird lover Robert Parker and the declaration by his successor Hugh G Balloni that the 2016 vintage of Huevo Podrido, a newly launched $100, unwooded, Sin-Crianza, wine from Marques de Murrieta was the finest Rioja he’d ever tasted. Across the border in Portugal, the traditionalists received another blow when the ever-innovative Taylor’s (inventors of Croft Pink Port) announced that it was now ageing its vintage port in real concrete “pipes” rather than wooden ones.

“We are facing a disaster” said barrelmaker François Quercus. “Now even the most successful Napa wineries have switched to eggs, while our former French customers have taken to printing “Vieux Chêne” – Old Oak – on their labels. Shaking his head in dismay, Quercus said “barrels have been part of wine since the days of the Romans. Wine has to be in a barrel. It needs to breathe through the wood; wine that has been aged in stainless steel or concrete develops undesirable ‘reduced’ aromas”. Experts like Dr Jamie Goode, disagree, however, responding that these characteristics are the result of winemakers not adapting their sulphor regime to the new containers.

Some members of the so-called “natural” wine movement are uncertain how to react to the switch from barrels to eggs. “On the one hand, I applaud the fact that wine no longer has that artificial vanilla flavour, and sometimes smells naturally like a badly-tended latrine”, said doyenne of the movement, Alice Feiring, “But on the other, I worry about all those birds”.

The facts behind the whimsy

Oak barrel sales are falling. In a July 10, 2013 article, Drinks Business quoted Pierre Marchais, marketing director of French barrelmaker Vicard as saying that  “3% of the world’s global wine production was aged in barrel, now it’s just 2%, so we’ve lost 33% of the market…The trend at the moment is for fruit forward wines that are designed to be drunk young, which isn’t working in our favour.”

The cork producers of Portugal regularly – and questionably – claim that a move from natural corks to synthetic ones or screwcaps will lead to the extinction of wildlife in Portuguese forests. And fans of natural cork, like M Quercus, also like to say that undesirable “reduction” aromas are a frequent consequence of the use of screwcaps.

90% of New Zealand wine is now sealed with screwcaps (without evident reduction problems) while the figure in Australia is rising to similar levels.

Hedda Intheclouds is an invention, but her views do very closely represent those of some Australian producers I have met.

Concrete eggs do cost less in the long term than barrels and are being introduced by increasing numbers of producers, including Pontet Canet.

I apologise for putting words in the mouths of any living people and for imagining the launch of wines that are unlikely ever to exist.