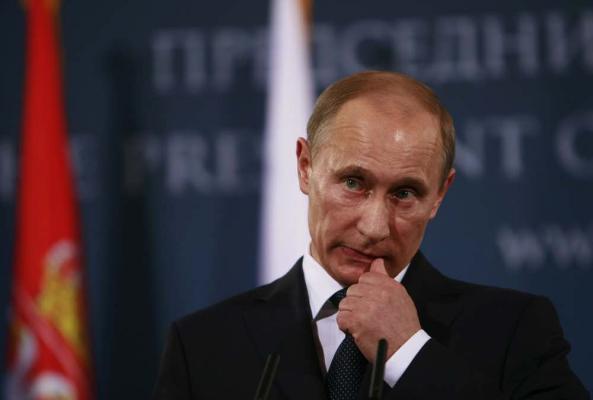 Solid evidence has been slow in coming, but there is little doubt that over the past decade the Russian government, under the direction of Vladimir Putin, has been tampering with the wine business. The tampering has taken many different forms, but it all seems aimed at destabilizing the credibility of the wine business itself — not such a difficult task given the unstable nature of its most famous figures. No one is quite certain what Putin’s motivation might be, other than he’s just a meddling, power-hungry dictator, which makes it rather astonishing he failed his recent Master of Wine practical exam.

American Intelligence (long thought not to exist, the recent election confirming its absence) has been keeping a close eye on the Russian influence in the wine business. Sources in the Intelligence community, whose identities will remain confidential because they are not authorized to speak on the record, plus I was righteously pissed when I spoke with them and can’t seem to remember who they are, say that there is evidence that Rudy Kurniawan was actually a Russian agent working undercover.

Kurniawan’s assignment, a source told me, was to destroy the wine auction business by selling fraudulent wines to unsuspecting auction patrons. And the plan might have worked, only the auction houses had already been doing that for years and were only too happy to have even better forgeries than usual. Kurniawan is now serving his prison sentence, though there are rumors that President Trump is considering a pardon for Kurniawan (perhaps in a deal with Putin), having recently Tweeted, “Dr. Conti sold phony wines to stupid crybabies like Bill Koch. So what? Lying media makes FAKE wines. FAKE news. Disgusting.”

According to sources, there is also mounting evidence that the Natural Wine movement was created by Russian agents in an effort to undermine the prestige and value of the traditionally coveted wines of Bordeaux and Napa Valley. Russian agents, masquerading as sommeliers, have spent the past several years conducting an online campaign touting the superiority of Natural Wines. “The idea was never to tell the truth about Natural Wines,” a source told me, “In fact, most of the wines these fake Russian sommeliers effusively praise are about as natural as lip gloss on a beaver. Hell, many of those Natural Wines are actually produced in Russia at secret wineries using less than the classic varieties — the so-called ‘Chernobyl Grapes.’ Many are toxic, or, even worse, txakolina.”

Though the Russian plan to undercut and discredit the famous châteaux of Bordeaux and the cult wines of Napa Valley by secretly promoting Natural Wines failed to bring about the collapse of their obscene prices, many observers believe it failed only because of the influence of the Chinese. Anxious about the Russian influence in the wine business exceeding their own, the Chinese government encouraged its wealthiest individuals to invest heavily in both First Growth Bordeaux, and in Napa Valley Cabernets in bottles weighing more than six pounds each, a sure sign of capitalist decadence and climate change deniers. The Chinese government’s interference in the market has kept Russian influence under control and artificially kept wine prices higher than a Yao Ming wedgie.

The Obama administration, recently released documents reveal, was aware of the infiltration of the sommelier community by the Russians and was actively trying to combat it, even going so far as to grant WSET certificates to anyone who asked politely and knew Sylvaner wasn’t one of Santa’s reindeer. Yet it wasn’t enough to offset the influence of Alice “the Red” Feiring, an alleged Russian sympathizer and Natural Wine tsarina, whose work has influenced countless impressionable young sommeliers into thinking that Natural Wines are the opposite of “FAKE wines,” as Trump might have it. Many experts estimate that nearly 70% of working sommeliers in the United States are either communist sympathizers, or they’re dumber than a just-bottled Gevrey-Chambertin.

Another recent investigation revealed that the movie “SOMM” was secretly financed by Putin’s Kremlin. “SOMM,” a 2013 theatrical release, glorified sommeliers in general, and those holding the title “Master Sommelier” in particular. The film did for MSs what Leni Riefenstahl did for guys with one testicle. It has also been rumored that computer hackers in the employ of the Russian government tampered with the scores of the Master Sommelier exams, resulting in many people walking around wearing cheap lapel pins who think they invented wine, but actually don’t know what the hell they’re talking about. The Court of Master Sommeliers has denied this accusation, saying in an email response that, “…most of the recent Master Sommeliers won by several million votes if you don’t count all the people who voted illegally.”

As an aside, “SOMM: Into the Bottle,” the sequel to “SOMM,” is believed to have been financed by the North Koreans, stoking Westerners’ fears that they are becoming increasingly sophisticated at producing bombs that can hit U.S targets.

Most of the major wine publications have had their databases hacked, as has Wine and Spirits. There is some evidence that Russian hackers are responsible for the score inflation now rampant in the industry, though most insiders don’t believe the magazines need the Russians’ help inflating scores, they have ageing palates for that. Nevertheless, no one is exactly certain what the Russian hackers were doing while inside the databases of these wine publications. Recently intercepted email exchanges between several hackers and their Russian contacts suggest the Russians were trying to make all the wine descriptions nonsensical and bear no relation to the wines being reviewed only to find that Neal Martin had beaten them to it.

No one is certain why Putin targeted the wine business, but his secret work over the past decade has undermined the credibility of the wine business and wine journalism to a remarkable degree. It seems every day a new revelation comes to light. For example, a recent investigative report into the popular wine chat room Wineberserkers found that nearly 60% of the registered male users on the site were actually created by two Ukrainians named Larry, while the other 40% are just really needy and lonely. The three women registered on Wineberserkers were, sadly, real.

Experts believe that we’ve only just scratched the surface when it comes to the Russian influence over the wine business and wine media, and, as a remedy, they suggest the obvious. Perhaps, they say, it’s best to ignore them both altogether.