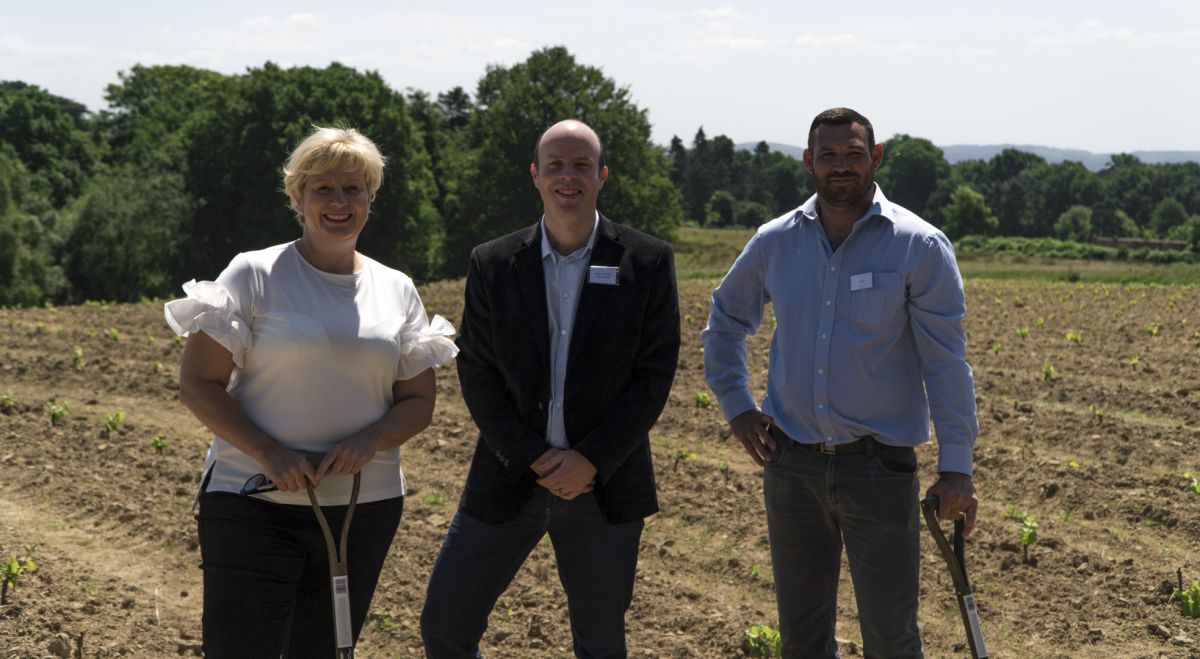 English sparkling wine producers collectively present a terribly well-to-do appearance, all smart chinos and glasses of fizz on the lawn. But Pythonesque tendrils are creeping through the cracks in the patio… From Sussex Pinotage, to Tooting rosé, all the way to orange wine from Surrey, the irrepressible English sense of eccentricity is alive and kicking in its increasingly peculiar and wonderful still wines.

Twenty-five years ago, Penny Streeter (above left) was a single mother of three children living in sheltered accommodation for the homeless, with nothing but two deckchairs to sit on. Since then she’s developed a thriving medical recruitment business and now she’s No. 744 on the Sunday Times Rich List with an estimated fortune of £157m. After returning to her native South Africa she bought Benguela Cove vineyard and resort in Hermanus, and two properties in Sussex: Leonardslee Lakes & Gardens and Mannings Heath Golf Course. Both now are home to vineyards, 16 hectares mostly planted with varieties for sparkling wine. And half a hectare of Pinotage.

When I first saw the press release declaring England’s first Pinotage vineyard, I actually thought it was a practical joke. It’s not as if UK demand is so strong that South Africa can’t cope… Johann Fourie (above centre) is cellar master for all of Streeter’s properties, so I asked him – why Pinotage?

He laughs. “I’ll be the first person to put up my hands and say I have little experience of English viticulture,” he says, “so I might make a complete fool of myself.” But he works with viticulturist Duncan McNeill who has over a decade’s experience in the UK. “We’re pushing the boundaries,” says Fourie, and the more he explains the thinking behind it, the more Pinotage makes sense.

Together, Fourie and McNeill were surveying a site on their property trying to figure out the optimal variety to plant to produce a still wine. They considered the marginal English climate; the threat of spring frosts, the short growing season, occasional poor weather at harvest. It got Fourie thinking. “Pinotage is fairly late with budburst… it ripens quickly – we always pick it first in South Africa – and it has fairly thick skins, it’s really disease resistant which is important in the UK… and it doesn’t have any of those leafy, green flavours if you pick early.” It ticked all the boxes. He got on the phone and managed to source some vines in Switzerland of all places (he adds that it’s grown in other cool climate countries such as New Zealand and Canada.)

He points out the trend in South Africa is towards a more elegant style of Pinotage, which is what he’s aiming for here; more like a Pinot Noir, “not a big 15% alcohol red wine.” And if the weather doesn’t play ball some years, he can use it as base wine for sparkling instead – Pinotage does have Pinot Noir as a parent variety after all, and he points out that Simonsig already make a good one. “It might be a total fail, but if we don’t try, we won’t know,” he says. All being well, the first release will be in 2023. And I can’t wait to try it. 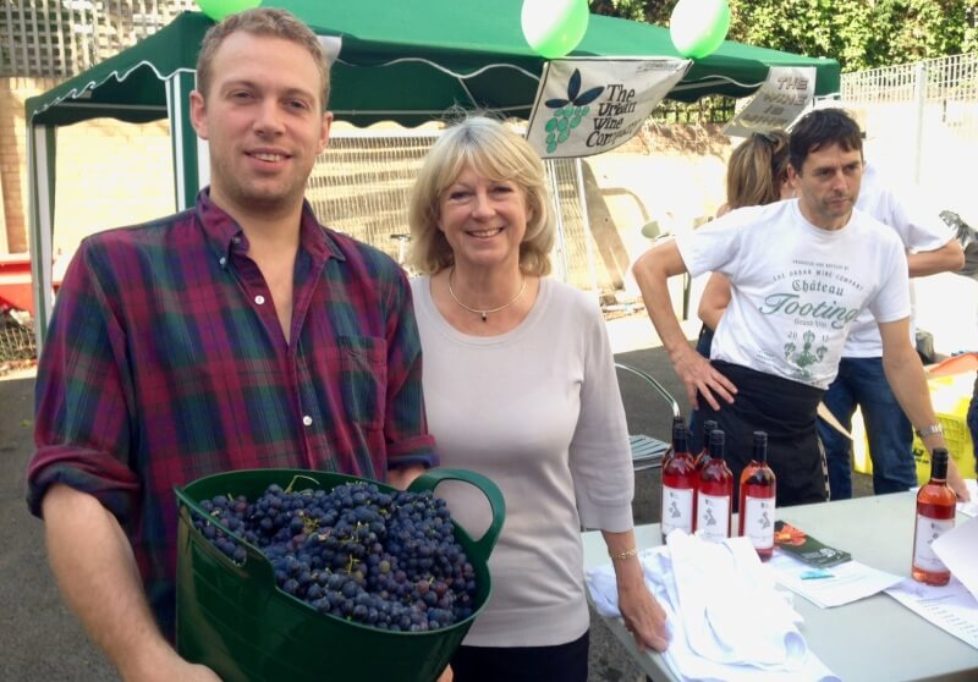 Richard Sharp and Paul Miles, two friends from the unglamorous borough of Tooting in South London, were observing a harvest whilst on holiday in France and asked each other if it was possible to make a wine back home in the capital. Sharp had a grape vine in his garden and wondered if he could find other contributors who might want to turn their unwanted grapes into wine. Sharp says “we were just messing around really” for the first vintage in 2009, but they’ve stuck at it and now they produce up to 3,000 bottles a year.

Château Tooting now has over 250 contributors who bring in grapes from all over London, and not just from gardens. They’re harvested from schools, hospitals, allotments, community greenhouses, railway sidings – anywhere really. “People bring their grapes in many weird and wonderful ways – on the tube, on bikes, in old cars, on the bus in backpacks… it’s a really random collection of people but it’s very inclusive.”

Some people know which grape varieties they have, but most have no idea. All are brought to a central collection point on a specific day each year, and they’re trucked to Halfpenny Green Wine Estate in Staffordshire who makes the wine. The grapes are all vinified together to produce a still rosé. This year they plan to make a sparkling one too. Members are allocated a number of bottles they can buy for £9.00 each according to the weight of grapes they supply. Non-member can buy via their website urbanwineco.co.uk for £15.99, and you can also find it in some London restaurants.

Considering the jumble of grape varieties involved and the limited control they have over cultivation, the wine is much better than it has any right to be. Harvest day this year is 29th September in Battersea – if you’re a Londoner with a source of grapes, get involved. 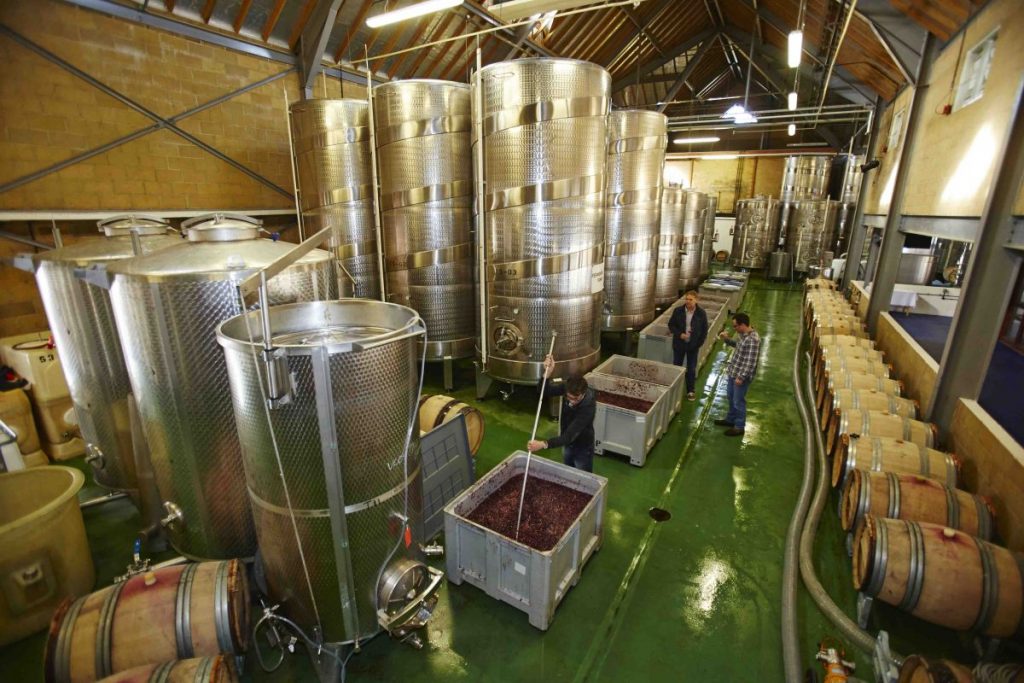 If Château Tooting was born out of sheer enthusiasm, Litmus Wines have a rather more technical foundation. Established in 2008 by merging the winemaking consultancies of John Worontschak and Sam Harrop MW, it’s quicker to list the wine-related activities that Litmus don’t do: they are winemaking consultants, contract winemakers, they supply biotech solutions, import and distribute wine – and they make some too. And with this kind of knowledge and expertise, it’s no surprise they’re coming up with some off-the-wall styles.

They occupy a facility in one of the UK’s largest wine estates, Denbies in Dorking, Surrey, so they have plenty of fruit at their fingertips. They make a red Pinot Noir and a Chardonnay/Bacchus blend, but their two latest editions are more esoteric: a still white Pinot Noir and an orange wine made from Bacchus.

General manager Mike Florence simply explains that “we love Blanc de Noirs, and John thought there’s no reason not to make a still version.” The fruit needs to be riper than that destined for sparkling wine production, so they can’t make it every year, but they make a few thousand bottles when nature allows. Aromatically speaking their 2015 is between floral and smoky, it has a serious demeanour, very dry with firm acidity running through it like a blade.

The Litmus 2015 orange wine – their first vintage – is more easy-going. Made from hand-harvested Bacchus grapes, it spends two weeks on the skins after fermentation; to the eye it’s close to a white wine, though with deep yellow colouring, but on the nose it’s something else. It’s highly aromatic and gently grassy with white pepper, grapefruit and elderflower all jostling for attention. It’s fairly full-bodied with a gently oily texture that helps counterbalance the fine tannins, and finishes dry, crisp and slightly saline. You could accuse them of chasing trends, but when it’s well made and relatively inexpensive – £15 a bottle isn’t a high price for a good orange wine – who cares.

So do they have any exciting new projects? “I can’t tell you all the secrets!” says production manager Matthieu Elzinga, “But this will be a very big year…” Watch this space.

‘The best weather we’ve ever seen’

There are plenty more examples of innovative styles: Albariño from Chapel Down, Kent; a fortified wine from White Castle Vineyard, Monmouthshire; a Bordeaux blend from Sharpham, Devon; a Reichensteiner pet-nat from Oxfordshire by Vagabond; the list goes on.

Some experiments are less successful. Stephen Skelton, the leading expert on English and Welsh wine, cites the Barclay Brothers’ 60ha vineyard planted on the island of Sark in the Channel Islands in 2010 at great expense. It has since been abandoned.

The boom in planting we’ve seen in the UK – from 430ha in 1984 to 2,275ha in 2017 – has largely been Chardonnay and Pinot Noir for sparkling wine production. When it comes to still wines, we still don’t really have the climate – “there are not that many varieties we can grow,” admits Skelton. But things are looking up. He describes 2018 as “the best weather we’ve ever seen” which is great news for still wines. The UK is increasingly well-known as a source of world-class sparkling wines – as it should be. But for me, the more beguiling side of English and Welsh wine is found in the still.