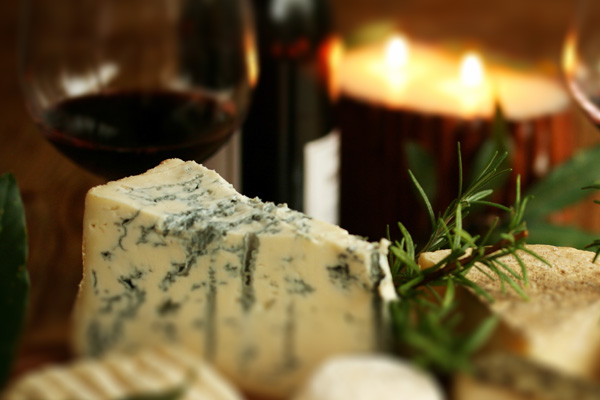 Cheese and wine are perfect partners and the right combination can add to the enjoyment of both. During the time I owned Paxton & Whitfield Ltd, the cheesemongers, I conducted many tutored cheese and wine tastings, including two in Tokyo which proved enormously popular. In The Cheesemonger’s Tales I have attempted to capture the essence of what proved so popular on so many evenings.

One of the first Master-classes in Cheese & Wine Matching, which I conducted, was with George Sandeman of Sandeman’s Port. The cheese and port pairings were superb and set the theme for many successful future tastings.

Later Peter McKinley and I did a fascinating tasting of cheeses with various spirits. Some of the flavour matches were superb but I was left with the feeling that more liquid was needed to wash down the cheese than was provided by the spirits – unless one was going to get very emotional indeed.

Over the years The Wine Society produced some splendid wines to accompany my cheeses and we held the tastings in some glorious venues – including the Assembly Rooms in Bath, a particularly splendid setting.

One of the most interesting tastings I conducted was with Remi Krug; certainly a tasting to blow away misconceptions. Krug Champagne went magnificently with cheeses which I least expected, and was less successful with those I thought would work well.

Tastings with Berry Bros always seemed as near perfection as one could wish. For a start, the approach of the two firms was very compatible; secondly, Lance Jefferson and I seemed to strike up a very congenial and effective way of working together; and most importantly, the quality of the Berry wines shone through to complement my cheeses. These were happy events and they were always sold out. Most were conducted in Berry’s splendidly refurbished cellars under 3 St James’s Street. It was always a pleasure to walk through their doors and breathe in the sense of timelessness which permeates the place. However, we also took our show to Japan, where two tastings at The British Embassy and The Tokyo America Club were outstanding successes.

Wines to go with cheeses

Hard Mild Cheeses such as Wensleydale and Cheshire go well with many white wines such as a Sancerre, Pinot Blanc and Chardonnay and light, fruity reds such as a Beaujolais or other Gamay wines.

Soft Cheeses such as Brie de Meaux and Camembert are especially good with Red Burgundies or other Pinot Noir wines, Cabernet Franc wines from the Loire like Chinon and the lighter fortified wines such as a 10 year old Tawny Port.

Full-Flavoured Pungent Cheeses like Epoisses or Pont L’Evêque are usually well suited to sweet whites such as Pinot Gris Vendange Tardive or Sauternes, full-bodied reds like Châteauneuf-du-pape and fortified wines such as Vintage Port.

Goats’ Milk Cheeses such as Valençay, Crottin de Chavignol and Golden Cross are ideally matched to crisp dry whites such as Sauvignon, occasionally to fuller whites like Pinot Blanc and light reds such as Chinon.

Sheep’s Milk Cheeses such as Wigmore and Berkswell are perfect with a 20-Year-Old Tawny Port, fuller whites, sweet whites such as Côteaux de Layon and some medium reds such as a Tempranillo.

Cheeses to go with wines

Crisp Dry White Wines such as Sauvignon, Chenin Blanc Sec and Riesling are ideal with goats’ cheeses like Golden Cross and Valençay as well as mild hard cheeses like Wensleydale.

Full White Wines such as Chardonnay, Gewurztraminer and Viognier go well with hard cheeses like Double Gloucester and Parmigiano Reggiano, some full-flavoured pungent cheeses, and many hard sheep’s and goats’ cheeses.

Champagne, if it is full-bodied, can be enjoyed with many hard cheeses especially mountain cheeses like Beaufort and Comté, as well as some of the full-flavoured pungent cheeses such as Maroilles.

Sweet White Wines such as Semillon and Chenin Blanc Demi Sec are natural partners to most blue cheeses especially Roquefort, some mature hard cows’ and sheep’s cheeses and full-flavoured pungent cheeses such as Munster.

Medium Red Wines like Merlot and Cabernet Sauvignon go well with British hard cheeses such as Cheddar and Single Gloucester.

Full-bodied Red Wines like Syrah and Grenache go well with full-flavoured pungent cheeses such as Pont L’Evêque and many blue cheeses like Fourme d’Ambert and Gorgonzola.

Light Fortified Wines like White Port and Old Tawny port are good matches for mild hard cheeses from all milks and many soft or crumbly cheeses.

Full Fortified Wines such as Vintage Port are, perhaps, the most versatile, going well with cheeses such as Stilton, other blues, full-flavoured pungent cheeses, some soft cheeses, certain goats’ cheeses and hard nibbling cheeses.

In this extract from his book, The Cheesemonger’s Tales, former Royal Warrant Holder as Cheesemonger to the Queen, Arthur Cunynghame sets the scene for matching cheese and wine. The book is divided into twelve chapters, each one dealing with a cheese and a wine from a specific maker, and guides you through a virtual tasting tour interspersed with anecdotes and helpful advice about buying keeping and serving cheese, seasonal cheeses and much more. Far from a dry reference book, this is a very readable book for all food and wine lovers.

“Well written and charming” – The Independent