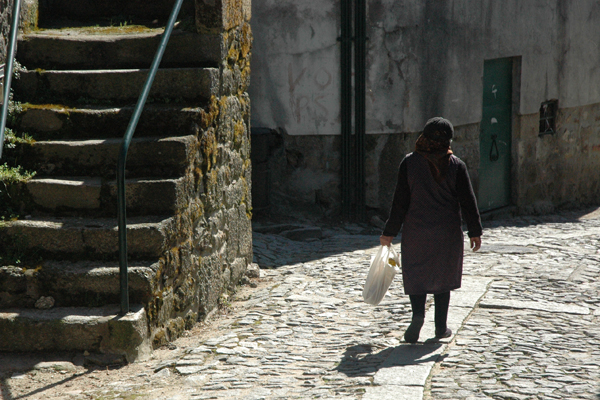 If you’re fond of trains, the 110 mile trip from Oporto to Pocinho, close to the Spanish border, is one of the most beautiful railway journeys in the world. For the first hour or so, you’d probably take issue with my description, as the wheezing locomotive huffs and puffs its way out of the city’s drab concrete-scarred suburbs, but when the track meets the River Douro, the views are pure Condé Nast Traveller. For three glorious hours the Linha do Douro runs alongside the water, dwarfed by steeply terraced vineyards.

The fact that the Douro Valley is a UNESCO world heritage site, not to mention its historical isolation from Oporto, has kept it comparatively free of ugly, high rise architecture. Even in the early 21st century, this can seem a wild and rugged place, with hard, rocky, slate and granite soils that are suitable for growing vines and olive trees, but not much else. Toiling in these vineyards is hot, back-straining work.

For most of its course, the river is overlooked by vines and the occasional Port quinta. These discreet buildings are a cross between a winery and a country house. Look up from the train and you might notice a few familiar names painted on their walls: Dow, Graham, Fonseca, Sandeman, Warre, Taylor, Quinta do Noval and Croft. These are producers of Port, arguably the world’s most famous fortified wine and the liquid that has made the Douro Valley’s name in wine circles.

Step off the train at Pinhão or Régua in high summer, pausing at a café before you climb up into the vineyards, and you can see why the region is so well suited to the production of fiery, intensely flavoured, long-lived reds. The abrupt, stone-walled terraces are baked by hours of unrelenting sunshine, toughening the skins of the grapes and boosting their sugar levels to full ripeness. It’s difficult, if not impossible, to make delicate, ethereal wines in such a place.

But before we get into the different styles of Port, not to mention the burgeoning table wine industry, let’s look at a few facts and figures. The Douro Valley is situated in north-eastern Portugal, inland from the city of Oporto. The total region covers some 250,000 hectares, but only 15% (some 38,000 hectares) is planted with vines and only 26,000 hectares of that are authorised for Port production. As you’d expect in such a hot climate, most of the wines made here (around 90%) are red, with the rest divided more or less equally between whites and rosés.

The climate of the Douro Valley is influenced by the surrounding mountain ranges, specifically the Serra de Alvão, Serra de Padrela and Serra de Bornes in the north and the Serra do Marão in the west. Crucially, these protect the region from the humid, westerly winds blowing off the Atlantic Ocean. The weather in Oporto and on the other side of the Marão Pass can be dramatically different. Temperatures in the Douro Valley can hit 45°C in summer, which are 15 to 20°C warmer than coastal Oporto.

Characterised by a series of deep and often dramatic inter-connecting valleys, the Douro has a classic continental climate, with very cold winters and hot, dry summers. That said, the further east you move up the valley towards the Spanish border (Toro is not far away on the other side), the hotter and drier it gets. The Atlantic influence is still felt in the lower Douro (1,200 mm of rainfall), whereas at the top end of the valley (380mm) it is insignificant. This is only a generalisation, however, as altitude, aspect, vine age and yield also impact on grape quality, and therefore, wine style.

The Douro has three winegrowing sub-regions. The Baixo Corgo (Lower Corgo) is the furthest west, covering the area from Régua to a tributary of the Douro called the Corgo. Further east lies the Cima Corgo (Upper Corgo), an area that includes the town on Pinhão, followed by the Douro Superior (Upper Douro), an enormous region that runs from Pinhão to Barca d’Alva. The Baixa Corgo is the smallest of the three, but has the greatest concentration of vineyards (14,582 hectares). The Cima Corgo is the heartland of Port production and is home to many of the best known Port brands and quintas, with 20,969 hectares under vine. And the Douro Superior is used far less for grapes and has only 10,175 hectares.

For wine lovers who are bored of the so-called Big Four grapes (Chardonnay, Sauvignon Blanc, Cabernet Sauvignon and Syrah/Shiraz), the Douro Valley makes a wonderful change. You can find small plantings of these and other international varieties (bottled under the Vinha Regional Tras-os-Montes denomination rather than the Douro DOC), but it’s the indigenous grapes that make the Douro Valley so special. There are more than 80 of these in all, but the most important are Touriga Nacional, Tinta Roriz, Touriga Francesa, Tinta Barroca and Tinto Cão for reds (the so-called ‘top cinco’) and Rabigato, Gouveio, Viosinho and Malvasia Fina for whites.

The best Douro whites can be surprisingly good, especially if they are grown in the higher, cooler areas around Lamego, Vila Real, Alijó and São João de Pequeira, but it’s the red wines (both Port and table wines) that are really exciting. The ‘top cinco’ are recommended for future plantings and are used extensively by all of the leading producers in the valley. Each has a different personality: Touriga Nacional is powerful, structured and deeply coloured, Touriga Francesa is fruity and perfumed, Tinta Barroca is robust and sweet, Tinta Roriz is elegant and long on the palate, while Tinto Cão is spicy and concentrated. Almost all Douro reds are blended wines.

The most famous of these is Port, a wine with a history that dates back to the 1750s, a decade that saw the Douro Valley become the first formally demarcated wine region in the world. Shippers originally added spirit to the region’s red table wines to keep them fresh (or rather less stale) during the sea journey to England, creating Port in the process. That’s why Port is always sweet, as the addition of spirit during fermentation stops the yeasts from converting grape sugars into alcohol. The resulting wines have around 20% alcohol by volume, only 6 to 8% of which comes from the original grapes; the rest is the result of fortification.

There are lots of different styles of Port, but the easiest way to remember them is to divide them into two camps: bottle-aged and wood-aged. All Ports see some time in wood (or ‘pipes’ as they are known locally), but some spend much more time than others. Wood-aged styles include Ruby, Premium Ruby, Reserve, Late Bottled Vintage (LBV), Tawny and Colheita (essentially a vintage dated Tawny). Bottle-matured styles, which tend to be more robust and long-lived include Crusted, Single Quinta (single estate wines from so-called ‘off vintages) and, lastly, Vintage.

In theory at least, Vintage Port is the pinnacle of what the region produces, although aged Tawnies come close. Vintage Ports are bottled 18-20 months after the harvest and subsequently matured in bottle for a decade or more. They are only made in declared years and even then account for only 1% of total production. There is general agreement about the best harvests, but declarations vary slightly from house to house. The best recent years include 2007, 2003, 2000, 1997, 1994, 1992, 1991, 1985, 1977 and 1966. Names to look out for (and not only for their Vintage releases) include Dow, Graham, Taylor, Quinta do Noval, Niepoort, Croft, Warre, Calem, Churchill, Quinta do Portal, Fonseca and Ferreira.

But that’s only part of the story. The precise figure is difficult to establish, but roughly 45% of what is produced in the Douro is sold as table wine rather than Port. Until comparatively recently, most of it never left the region, which was just as well for non-Portuguese wine drinkers. There were a few exceptions to the tough and tannic norm – José Mourinho’s favourite wine, Barca Velha, Miguel Champalimaud’s Quinta do Côtto and Ramos Pinto’s Duas Quintas – but most Douro table wines made you grateful for the invention of Port by the Brits.

Douro table wines have had their own classification (DOC) since 1979, but it’s only in the last 10 years that they’ve begun to take off. Temperature controlled fermentation has been a boon to quality, as has the gentler extraction of tannins. The other big change is that producers have started using some of their best grapes to make table wines, rather than reserving them for their Ports. In some cases, they have planted new vineyards in cooler areas that are better suited to table wine production.

The result is that, almost from nowhere, the Douro Valley has become one of the most exciting red wine areas on the planet. The most dynamic group of producers are The Douro Boys, led by the charismatic duo of Dirk Niepoort and Cristiano van Zeller. The five members are Quinta do Vallado, Niepoort Vinhos, Quinta do Crasto, Quinta do Vale Dona Maria and Quinta do Vale Meão, all of whom make superb reds. Other top table wine names include Pintas, Poeira, Barca Velha, Quinta de la Rosa, Quinta da Leda, Quinta do Côtto, Quinta da Gaivosa and Prats & Symington (Chryseia). It’s taken the Douro Valley centuries to make world class table wines, but like a mature bottle of great Vintage Port, they’ve been worth the wait.