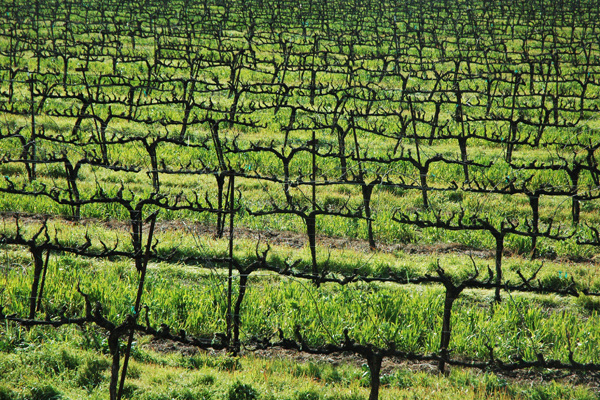 The Napa Valley is the most famous wine region in the Americas and arguably in the entire New World – think Bordeaux crossed with the Hollywood Hills and more than a touch of Wall Street – but its rise to prominence is comparatively recent. When Robert Mondavi set up his eponymous winery in Oakville in 1966 with a staff of three people and loans totalling a mere $200,000, it was the first new venture to appear in the valley since the repeal of Prohibition in 1933.

With his passion for European style wines and varietal labelling, not to mention his skills as a one man publicity machine, Mondavi started a modern gold rush. Take a drive up Highway 29 today, or the slightly quieter Silverado Trail, and you will be astonished by the number of wineries, squeezed toe to toe into one of the most expensive pieces of real estate in the wine world. $200,000 would barely buy you a tractor shed in Oakville today. At the latest count, there were 437 wineries in the Napa Valley, but every time I visit another few dozen have joined the throng.

The Napa Valley is home to some of the most sought after wines in the New World, although it has to be said that some of them are more coveted in the United States than they are on this side of the Atlantic. The top wines from the likes of Screaming Eagle, Harlan, Bryant Family, Stag’s Leap, Phelps, Dominus, Shafer, Colgin and Grace Family Vineyards can fetch as much as £300 a bottle on release. There are lots of cheaper wines from Napa too, but the average price of a bottle is still around £20, which is a reflection of the price of land as well as the area’s reputation.

Such a reputation has more to do with quality than quantity. Napa’s 18,322 hectares produce around 9.2 million cases a year, which amounts to only 4% of California’s total harvest. But when it comes to punching its economic weight, Napa is a far more powerful proposition, with 30% of the state’s wine sales by value. Napa is a tourist Mecca as well as a fine wine region, with dozens of good restaurants and its very own train, ferrying visitors up and down the valley.

Even by New World standards, the Napa Valley developed comparatively late as a vineyard area. According to Larry Walker’s authoritative ‘The Wines of the Napa Valley’ (Mitchell Beazley), Napa was ‘virtually unknown wilderness to Europeans’ until the early 19th century. The first vines were planted in 1836 by one George Calvert Yount, who probably got hold of his cuttings from a Spanish mission in neighbouring Sonoma. No one knows for certain, but this was almost certainly the same variety that the Spaniards planted all over the Americas: known as País in Chile, Criolla in Argentina and Mission in California.

Yount’s operation sounds like a hobby winery, although one of his wines won second prize at the Napa County Fair in 1857 (against scant competition, presumably). It wasn’t until 1861 that Charles Krug established the Napa Valley’s first commercial winery. After that, things began to speed up. By 1889, there were over 140 producers, many of whom, such as Schrambsberg, Beringer, Niebaum and Inglenook, are still in existence today. German, French and Italian immigrants had created a considerable reputation for Napa wines by the mid-1890s.

And then, disaster struck, thanks to the arrival of phylloxera, an aphid that kills Vitis vinifera (the species that includes all of the best varieties) vines. This was followed by Prohibition in 1919. Some wineries survived as suppliers of altar wines (and other, illegal, beverages), but Napa’s wine industry was in pretty shoddy shape by the time of repeal in 1933. Many wineries had been moth-balled for more than a decade.

Napa’s renaissance took a while. The so-called Big Five (Beaulieu, Beringer Brothers, Charles Krug, Inglenook and Louis Martini) started to make some good wines after the Second World War, but it was Robert Mondavi who was the real modern pioneer. Inspired by his example (and success), a new generation of Napa wineries opened in the 1960s, including well known names such as Heitz, Spring Mountain, Sterling, Stony Hill, Chappellet and Chateau Montelena.

The pace of development quickened further in the 1970s, brining new investors to the Napa Valley, especially after the now legendary Judgment of Paris Tasting in 1976, when a group of French tasters rated a line up of Californian Chardonnays and Cabernets above the best of Bordeaux and Burgundy. A re-run of the same tasting in 2006, held as part of a 30 year celebration of this landmark event, produced pretty much the same set of results for the red wines, which undermined the defence that some Frenchmen used at the time: namely, that the California wines wouldn’t age.

Talking of the French, the Napa Valley has adopted what looks like a very Gallic system of appellations, or American Viticultural Areas (AVAs) since they were introduced in 1982, although (unlike in France) producers are still free to plant whichever grape varieties take their fancy.

Some of these AVAs are more distinctive than others, but they do reflect the fact that Napa is a complex place. Different areas are better suited to certain grape varieties and wine styles. As the legendary California winemaker, André Tchelistscheff, pointed out more than 40 years ago, the southern part of the valley down near San Francisco Bay reminded him of Burgundy, the middle of Bordeaux and the northern portion, from Saint Helena to Calistoga, of the southern Rhône Valley. The cooling effect of altitude complicates the picture a little, but it is still broadly true today: the further north you go in the valley, the warmer it gets and the more suited it is to Mediterranean style varieties.

Napa Valley wineries are not the most adventurous in the world when it comes to grape varieties. This is not the place to look for Grüner Veltliner, Albariño, Tempranillo or Lagrein. The main reason is that mistakes are expensive when land costs so much, and producers are generally risk-averse. Another is that they can charge higher prices for wines made from Cabernet Sauvignon and Chardonnay, the king and queen, respectively, of the Napa Valley. Their courtiers are Merlot, Pinot Noir, Sauvignon Blanc (a qualified success in the valley, where producers appear to be afraid of varietal flavour) and Zinfandel.

Things are better than they were, however. In recent years, the so-called Rhône Ranger (geddit?) movement has encouraged a growing number of wineries to try their hand with Syrah, Viognier, Marsanne and Roussanne. The results have been best with Syrah, which has world class potential in the Napa Valley (albeit, as ever, at high prices). You can also find patches of Charbono, Petite Sirah, Riesling and Chenin Blanc, but these are curiosities.

Above all, Napa is associated with one variety: Cabernet Sauvignon. This is largely based on the success (and scarcity) of the so-called cult Cabernets that began to emerge in the early 1990s. These wines have been described by Larry Walker, pretty accurately in my view, as ‘commonly over-ripe, over-concentrated, and generally over-the top…..They are also undrinkable when young and of questionable ageability’.

The prices, extraction and over-ripe flavours of some of these wines shouldn’t obscure the fact that red Bordeaux varieties are very well suited to certain parts of the Napa Valley, however, or that the cult Cabernets are not always undrinkable. Producers such as Stag’s Leap, Shafer, Diamond Creek, Chimney Rock, Robert Mondavi, Grace Family Vineyards, Viader, Spottswoode, Newton, Dominus, Beringer and Cain Cellars have demonstrated that it’s possible to make balanced, nuanced wines from red Bordeaux varieties. They don’t have to taste like blackcurrant jam, despite what some influential American wine writers seem to think.

The Napa Valley is acknowledged as the best wine region in the United States, even if some people (myself included) have a greater affection for the less pretentious, more laid back Sonoma County. Napa has more in common with Bordeaux than just Cabernet Sauvignon, Merlot and Sauvignon Blanc. It is also a centre of power, a place to flaunt wealth (whether as a consumer or a winery owner) and, let us not forget, the source of some spectacularly good wines. One hundred and seventy six years after George Calvert Yount planted those first Napa vines, he must be smiling in his grave.