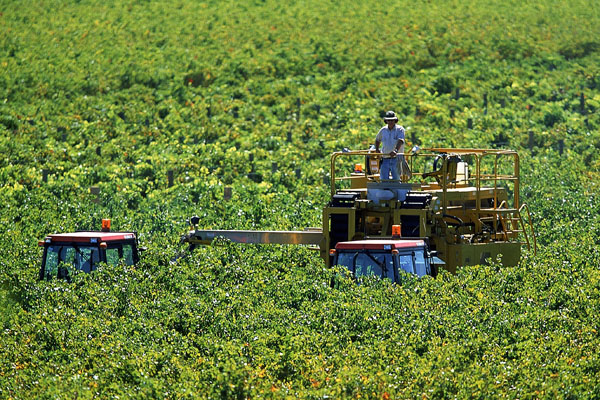 The first time I visited the Barossa Valley in South Australia, someone gave me a cassette. (It was so long ago, that iTunes didn’t exist.) The music was a collection of oompah classics recorded by the Tanunda Town Band. I expected the album to contain brass band versions of things like Waltzing Matilda, but the titles were German, not Australian: ‘Trink, trink, Brüderlein trink’, ‘In München steht ein Hofrbrauhaus’ and (my favourite) ‘Wenn das Wasser im Rhein goldner Wein war’.

To this day, that tape remains a useful reminder of the Barossa’s Germanic origins. Barossa Deutsch is still spoken in the region and over the years Germans have influenced the names, architecture, food and musical traditions of the valley. The German connection may also explain the Barossa’s lasting affection for Riesling, the classic grape of the Mosel, Rheingau and Pfalz.

The Barossa’s German link dates back to the 1840s, when a newly-arrived Scot, George Fife Angas, needed workers for his sizeable estates. His solution was to pay for three shiploads of persecuted Lutheran farmers to emigrate to Australia from Silesia. More Germans followed, with many going into the fledgling wine business. Several of the valley’s most famous names – Seppelt, Krondorf, Basedow, Orlando, Henschke, Wolf Blass, Peter Lehmann, St Hallett and Leo Buring – have Germanic connections. Even Jacob’s Creek, one of Australia’s most famous wine brands, was founded by a Bavarian farmer and baker called Johann Gramp.

The German side of the Barossa’s history is only one part of the tale. As well as George Fife Angas, various Brits established vineyards and wineries in the mid-19th, century, including Yalumba, Penfolds and Saltram. The combination of Lutheran and British graft rapidly turned the Barossa Valley into one of the most successful wine regions in Australia. According to James Halliday’s ‘Australian Wine Compendium’, Seppelt had become the biggest operation in Australia by the 1880s. By the early 20th century, half of South Australia’s wine was made in the valley and the Barossa was regarded as the centre of the Australian industry.

Things haven’t always gone so swimmingly, however. The Barossa suffered from its German heritage during both World Wars (they even temporarily anglicised some of the names in the Valley to make them sound more patriotic). Later, it found itself out of step with prevailing wine fashion, as people started to drink less and less fortified wine (a warm climate Barossa speciality) and develop a taste for cooler climate regions like Coonawarra and Margaret River. The subsequent boom in white wine left the Barossa, with its old plantings of Shiraz, Mourvèdre and Grenache, in even deeper trouble. In the 1980s, some red vineyards weren’t even picked; others were turned into Shiraz muffins, the ultimate insult for an old vine.

The man who saved the valley from disaster was Peter Lehmann, the so-called Baron of the Barossa. Lehmann, a colourful, hard living, cigarette-puffing Aussie, was born in Angaston and worked at Yalumba and Saltram before setting up his own winery. Lehmann’s plan was bold, even foolhardy: namely, to keep the Barossa’s struggling growers in business by buying their grapes, despite the lack of demand for the local wines. The gamble paid off and, to this day, the growers have remained understandably grateful. If you drive up to the winery during vintage, you can still find them chatting and joking with Lehmann on his legendary weigh-bridge.

In the 1990s, the Barossa Valley rediscovered a sense of identity. Alongside the irrepressible Lehmann, three individuals did an enormous amount to spread the word about South Australia’s most historic region– Charlie Melton, whose wines include the iconic Nine Popes, Rocky O’Callaghan at Rockford and Bob McLean of St Hallett, whose Old Block Shiraz was drawn from some of the valley’s oldest vines.

Mind you, it’s not always easy to work out which Aussie wines contain Barossa fruit. Many of the wineries that are based here, such as Penfolds, Wolf Blass, Yalumba and Jacob’s Creek buy grapes from all over Australia and label their wines as South –Eastern Australia, although all four wineries have Barossa only bottlings too. Smaller wineries which specialise in wines made Barossa fruit include Tim Smith, Charlie Melton, Dutschke Wines, Glaetzer, Rockford, Kaesler, Kalleske, Ross Wines, Michael Hall, Langmeil, Leo Buring and Torbreck Vintners.

What about the vineyards? Well, if you talk to some of the growers standing by Peter Lehmann’s weigh-bridge, they’ll tell you that the valley has a series of distinct sub-regions and that Shiraz from, say, Kalimna in the north of the valley (the source of some of Penfolds’ best red grapes) is very different from Shiraz grown in Lyndoch to the south. Wherever you go, the climate is pretty hot.

The majority of the soils in the Barossa, at least on the valley floor, are a mixture of red loams, yellow clays and grey sand. Many of these vineyards are well suited to the production of darkly coloured, intensely flavoured reds, although low yields (more likely if the vines are ‘dry-farmed’ without irrigation) and vine age often have as big as influence on wine style as the soils in which the vines are grown. The Barossa has some of the oldest vineyards in Australia, ergo the world.

Most of the Barossa’s grapes are grown on fairly flat land around the towns of Lyndoch, Tanunda and Nuriootpa, but there’s a sub-region of the Barossa that is very different, both in terms of its landscape and of the wines it produces. The Eden Valley, situated to the south-east of the main section of the Barossa Valley near the town of Angaston, is significantly higher and cooler.

The Eden Valley’s soils are broadly similar to those of the Barossa Valley (it a little ‘bonier’ in places), but its greater altitude means that it is better suited to varieties like Riesling, Chardonnay, Pinot Noir and Viognier. None of these varieties does as well in the hotter conditions of the Barossa Valley floor, although Chardonnay can be decent. The best warm climate white variety is arguably Semillon, however, which makes soft, broadly textured, custard and honeysuckle-like wines that are often oak aged.

The leading names in the Eden Valley are Yalumba (who bottle their Eden Valley wines under the Heggies and Pewsey Vale labels) and Henschke. Despite the fact that the Eden Valley is best known for its whites, its Shiraz can be wonderful too.

Henschke’s Hill of Grace is a case in point. After Penfolds’ Grange (blended from a variety of sources in South Australia including the McLaren Vale and the Barossa and Clare Valleys), this is arguably the most celebrated Shiraz in Australia. Grange’s ‘motherwine’ may come from Kalimna, but it is essentially a ‘multi-district blend’ (to use the term favoured by Penfolds). Hill of Grace comes from one ancient block.

The 20-acre vineyard from which it takes its name, dotted with gnarled, low-yielding vines, was first planted in the 1860s by Lutheran immigrants from Silesia. The small community that originally lived in the village of Parrot Hill disappeared at the turn of the century before last, leaving the ruins of a post office and a pretty, still functioning Lutheran church. But some of the vines that they planted, known as ‘the grandfathers’ to Henschke and his viticulturist wife, Pru, are still there.

Stephen Henschke is a fifth generation winemaker. Four generations of his family are buried in the graveyard that sits in front of the Hill of Grace church, surrounded by lofty gum trees and a sense of unhurried tradition. ‘You’re looking at genetic material from another age,’ he told me the last time I visited. ‘It’s pretty inspiring for a winemaker to work with some of the oldest Shiraz in Australia.’ The wine is inspiring for a consumer too: a rich yet elegant jumble of flavours with remarkable succulence and depth of flavour.

What made those Silesian farmers plant Shiraz rather than Riesling in the Eden Valley? After all, they must have sensed that this part of the Barossa was much cooler than the areas to the west and north-west. The explanation is remarkably simple: ‘The most famous red wines in those days were from the Rhône Valley, so when they came here they planted Shiraz,’ says Henschke. As in so many ways, the Germans made the right call in the Barossa. Without them one of the world’s great wine regions would be far less characterful than it is. I think of them, and silently salute them, every time I listen to that tape.