View basket “2020 Argentina Special Report” has been added to your basket.
Gerd Stepp used to work at Marks & Spencer before he went back to his native Germany to make wine again. Our loss was the Pfalz’s gain, as this is...
Read More |
GR-10 is named after a hiking trail that connects the Atlantic and the Mediterranean and runs through the Sierra de Gredos. It’s the entry-point red from 4 Monos (their whole...
Read More |
Cinsault comes in a variety of guises, from the light and fruit to the grippy and substantial. Tertius Boshoff sources this example from a 1972 block that also supplies his...
Read More |
Terret Blanc is one of those very localised grape varieties that you only find in the Languedoc, mostly in the Hérault department. It comes in three, mutated colours – white,...
Read More |
Everyone seems to have advice about how to get through lockdown.  Even if we’re all still sitting here in December, our diaries emptier than your local Wetherspoons, I can’t imagine...
Read More |
At 5pm on the 25thof April 2008, Peter Hellman received a phone call from Geoffrey Troy of New York Wine Warehouse. The wine merchant had heard that “something unusual” was...
Read More | 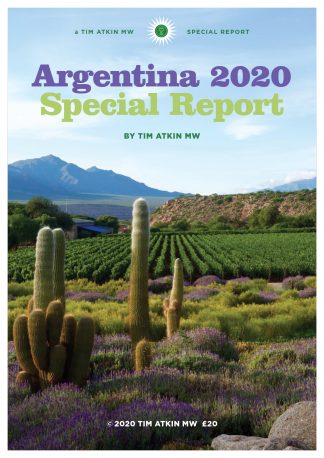 This is the eighth edition of my Argentina report, the product of three weeks of travelling, tasting, vineyard visits and conversations with winemakers. And it’s my most in-depth overview yet....

Add to basket
Read More |
Unwooded for the first time in 2018, but as full of bounce and blackberry fruit as ever, Hey! combines grapes from Luján and the Uco Valley in a juicy, supple...
Read More |
Domaine des Tourelles might not be as famous as Château Musar, at least outside Lebanon, but its wines are every bit as good, albeit in a less quirky style. French-educated...
Read More |
It may not be a popular opinion with Shiraz lovers, but Master of Wine Giles Cooke, who made this wine, thinks that “Grenache is Australia’s signature grape”. It’s certainly one...
Read More |
The air inside Rosa Kruger’s 4×4 is turning blue with expletives. Somehow the swear words sound even more forceful in Afrikaans, spat at the windscreen in disgust. This is road...
Read More |
“A wine of the vintage”, according to Gabriel Pisano, but this is no Beaujolais Nouveau. In fact, this brilliant, unwooded Tannat from one of Uruguay’s best young winemakers, sourced from...
Read More |
.