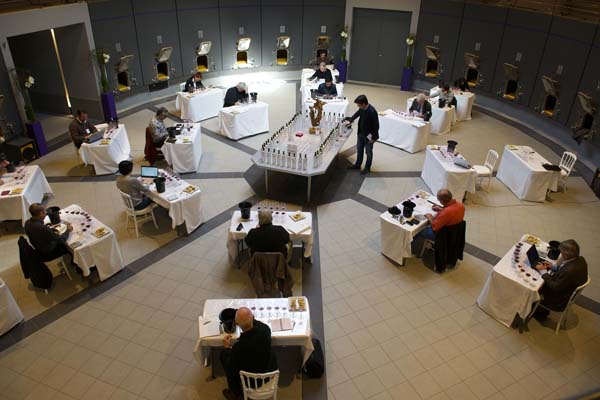 You might not have noticed, but the annual Bordeaux en primeur campaign is almost upon us. After a quartet of poor to decent vintages, when the very raison d’être of selling the region’s wines as “futures” was called into question and enthusiasm among punters hit some very low lows, Bordeaux has something to shout about once more. 2015 is the best year since 2010 and seems set to take its place alongside the best harvests of the last 20 years.

The curious thing is that château owners and négociants have been far less gung ho about 2015 than they were about 2009 and 2010, those back-to-back “vintages of the century”. The region’s generic body, the Conseil Interprofessionnel du Vin de Bordeaux, has declared 2015 “a nearly perfect growing season, similar to the great years of 2009, 2000, 1995 and 1990”, but that’s been the rule-proving exception. Restraint and Bordeaux are words that seldom appear in the same sentence, but what do you know…

Christian Seely of AXA Millésimes, which owns Châteaux Pichon-Baron, Petit Village and Suduiraut, says that: “I like the vintage a lot, but I don’t see the need to issue press releases telling the world how wonderful it is. 2015 doesn’t need talking up. And that kind of thing can be counter-productive anyway. It’s up to other people to taste the wines and make up their own minds.”

The comparative lack of hype about the 2015s might also be a reflection of the diversification of the fine wine market and Bordeaux’s diminished place within it. To put it simply: most people aren’t that bothered about en primeur any more. The heady days of April 2010, when the 2009 vintage was released and “people were queuing up to buy anything” in the words of Stephen Browett of Farr Vintners, seem to belong to another age, not just another decade.

It’s easy to understand why. If you look at the prices of the 2009s and 2010s in the market place – both “millésimes du siècle”, remember – most haven’t budged since they were released. With the exception of a few Parker 100 pointers, the value of the wines from these exalted vintages has flat lined. They were too expensive to start with, but the demand was still there, quite possibly for the last time. People don’t make the same mistake three times.

Since 2010, the Bordeaux en primeur market has been a non-event. Where are these wines now? Some of the 2011s, 2012s, 2013s and 2014s are stacked up in Bordeaux négociants’ cellars, while others have, or will, find their way onto French supermarket shelves as part of their “foires aux vins” (wine fairs). What is certain is that, in years like these, en primeur is all but pointless.

Bordeaux still dominates the auction scene – it makes large quantities of tradable fine wine and has tradition on its side – but many consumers have transferred their affections and cash to other regions over the last six years. Burgundy, Brunello, Barolo, Rioja and Champagne have all benefited from this trend, as well as some of the New World’s better-known brands.

Merchants, too, have embraced the new diversity. In part, this is because these other regions offer much better margins. The Bordeaux market is so competitive and so transparent, thanks to the internet, that the 7-8% margins many are forced to work on amount to “little more than a commission”, according to Charles Lea of Lea & Sandeman.

The continuing weakness of the pound against the euro, made worse by the on-going fuss about Brexit, has rendered en primeur Bordeaux an even riskier proposition for the British trade. From a high of €1.42 last December, the pound has slumped to €1.27 this week, a decline of more than 10%. The strength of the dollar, on the other hand, may encourage Americans to buy the 2015s. There are also rumours of renewed interest from Asian buyers, although top-end Chinese investors are arguably more interested in acquiring properties like Château de Sours than in amassing large collections of claret.

Will the campaign be a success? As ever in Bordeaux, it depends on prices. Everyone agrees that the 2015s will be more expensive than the 2014s, but how much is the crucial question. At the very least, the wines have to be offered below the levels of the currently available 2009s and 2010s – 30% cheaper, according to Stephen Browett. If that happens, he says, then Bordeaux en primeur will be “back to normal”, assuming the wines are very good.

That’s a very big if in my view. Too often in the past, the Bordelais have priced their wines according to what they think they are worth, rather than what the market is prepared to pay, 2007 being a good example. Are they chastened by what has happened over the last six years and a little wiser as a result? We shall see over the next couple of months, but I’m not holding my breath.