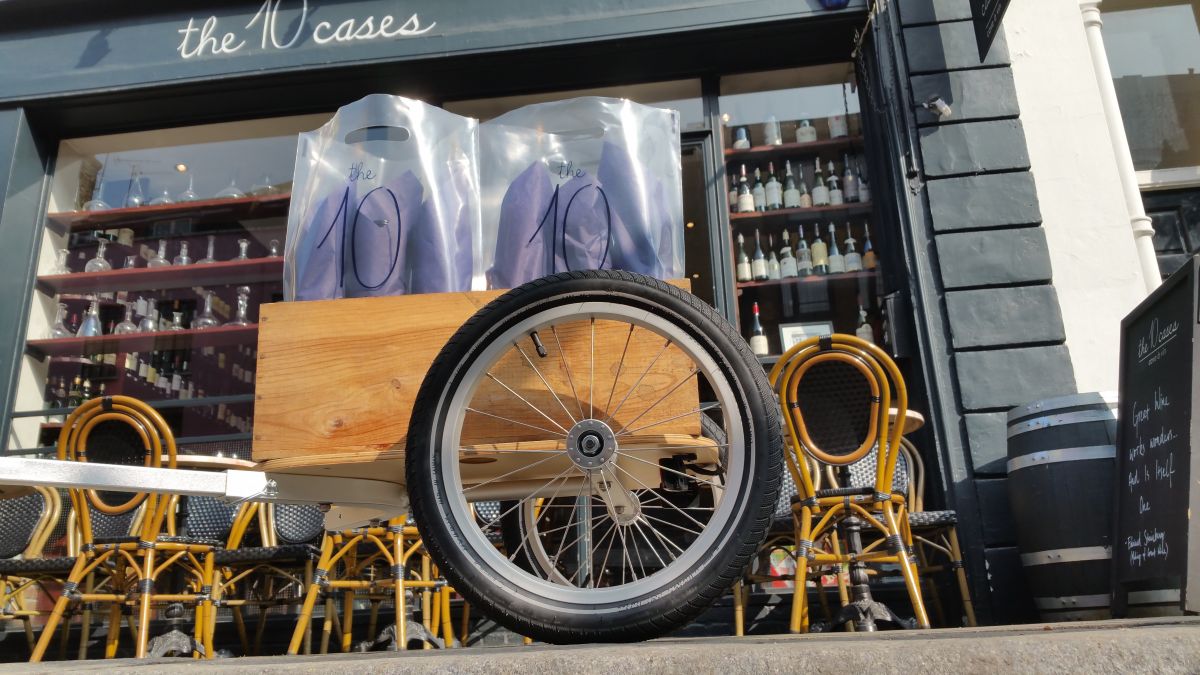 Whizzing home in my driverless car, I zip past yet another boarded-up wine shop. I suspected this one wouldn’t last much past 2020. You couldn’t sample the wines or buy food, and they didn’t have any wines you couldn’t find elsewhere. Some small chains are still going strong, but you can’t actually enter their shops anymore; they are just storage depots and delivery hubs. Walk-in customers became too troublesome for staff, who were busy picking, packing and delivering single bottles for immediate delivery. Shop customers were increasingly rare anyway – it’s so much quicker to order via an app while on the go than travel out of your way to browse in a shop, and no-one wants to carry heavy bottles all the way home. Why would you when every wine shop offers delivery within 60 minutes of placing an order?

‘This bus terminates here.’ Shunted out of my daydream, I gather my bags of clanking bottles, step into a rainy London evening and trudge home. We might still be waiting for driverless cars, but one-hour wine delivery is now a reality in several UK cities. London is the best served to date, with players of various different sizes: Amazon, Henchman and The 10 Cases. I tried them out to see how they compared. Is this really the future of wine retail? 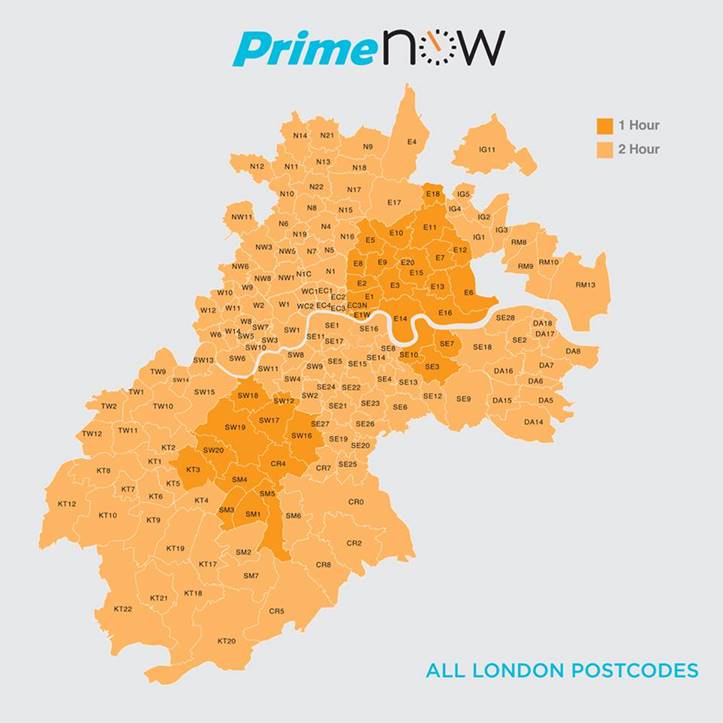 First launched in Manhattan at the end of 2014, Amazon Prime Now arrived in London in June 2015, and has since been rolled out to Birmingham, Newcastle, Liverpool and Manchester. To access the service, firstly you have to subscribe to Amazon Prime at £79 a year. Deliveries to qualifying postcodes within 60 minutes cost a further £6.99 each and there’s a minimum order of £20; to deliver outside of the core areas, you can request a two-hour slot slightly later in the day for free. There are thousands of items to choose from, including hundreds of wines and spirits.

I subscribed to the service, downloaded the app and started shopping. Searching for ‘wine’ produced 769 results. The range is similar to what you’d expect at a supermarket convenience store or a corner shop – Echo Falls, Blossom Hill, Gallo – with a few more interesting bottles around the £25-£30 mark. I opted for a 2007 Oddero Barolo at a very reasonable £22.86. Prices on the whole were pretty cheap.

It turns out that the areas in London that enjoy 1-hour delivery are constricted; I tried a dozen postcodes before I could find one that worked. So I tried the 2-hour delivery option instead. I ordered at 6pm, selected the soonest possible delivery slot (8pm to 10pm) and my bottle was delivered at 8.45pm.

“Ultra-fast delivery of a great bottle of wine or champagne ahead of a last-minute dinner party or birthday party is proving popular”, says Jason Weston, director of Prime Now. “The range of products available for customers in 60 minutes has increased since launch and we will continue to enhance the range to suit customer demand.” This is the main issue for serious wine lovers; at present there is very little you’d want to drink. If their range was transformed from the basic to the exceptional I could see myself using it, but the service isn’t cheap. 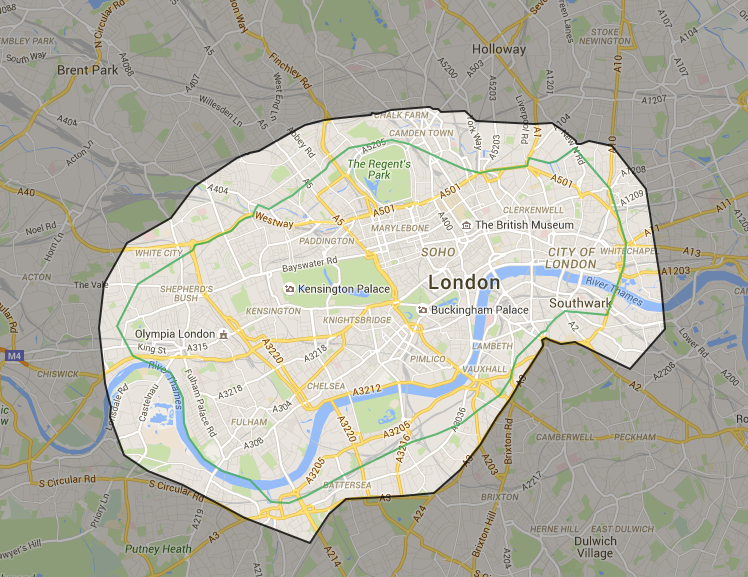 If you’re in Central London, you can get Henchman to pick up pretty much anything from any London store (from McDonalds to Harrods) and deliver to your door in less than 60 minutes. You can order using their iPhone app or their website. Most drinks orders cost £3.95 + 10% of the total bill if using one of their three suggested providers, or £7.99 + 10% if asking them to collect from the retailer of your choosing.

The app is easy to use and I quickly browsed through their three suggested retailers. Henchman Vault contains spirits and big-name Champagne; there’s plenty to choose from but you’re paying top whack. Nothing But The Grape sell organic wines at curiously inflated prices (£18 for Les Jamelles Pays d’Oc Chardonnay, anybody?) They also list wines from M Wine Store, the retail outlet of M Restaurant in Victoria. Prices are the same as in store (i.e. quite expensive) but they do have a decent range; I bought a bottle of Eben Sadie Sequillo White 2012 for £23.50. With delivery and 10% surcharge, it came to £29.80. My allotted henchman, Gergo the Badger, had it delivered to the City in 45 minutes.

“We expect 1-hour delivery to be the norm five years from now,” says COO Adib Bamieh. “The ‘slow’ [option] will be next day. You won’t be able to compete as a retailer with longer lead times.” Henchman have ambitious plans to extend their delivery area, add new UK cities (and even new countries) to their operations. “We’re applying logistics to retailers across London” he says, and they’ll soon be adding more retailers to the app, essentially giving them a new route to market via Henchman platforms and 1-hour delivery capabilities. If I was pressed for time I might use Henchman again, but until they’ve added some better-value suppliers I’d opt for the ‘custom delivery’ option.

The 10 Cases is a restaurant, wine bar and shop in Covent Garden, Central London. They were recently looking at other potential restaurant sites to open around London and one under consideration had an enormous cellar. With London rents being painfully high, they thought about how they might get another revenue stream out of it, and wondered if 1-hour delivery would be a popular service. In the end they didn’t secure the site, but the idea had stuck, so they ran a week’s trial last month with a limited selection of lines. They were offering a 50% discount for those willing to give feedback, so I gave it a test run.

Their shop contains an excellent range of wines, but only 20 are currently available via their pilot website deliver.the10cases.co.uk (you can also see their delivery area here, it’s a bit smaller than Henchman’s). I ordered four bottles, amongst them a Gaia Wild Ferment Assyrtiko 2015 for a perfectly reasonable £19.00. My wines were delivered to the City after 55 minutes by an eccentric-looking man on a bicycle. You have to search by style, which is a mild irritation if you’d rather just see the list of wines. What makes this service particularly interesting is that delivery is free and there is no minimum order.

During their trial week, they delivered 400 bottles to 100 addresses. The owners surveyed users afterwards and report that 95% said they would recommend the service to a friend. The beta version is still running, but will come to an end on 24th March. “The big thing will be the app coming out in July,” says co-owner Ian Campbell. And as for eventually going national? “That’s the moonshot, but we’re way off that. But it would be foolish not to think of it.”

He admits he’ll have to sell a considerable number of bottles to make it work financially, but as soon as their delivery zone reaches my door and they’ve expanded their range, I’ll be a customer. With excellent wines, free delivery and no minimum order, frankly it’s a no-brainer.

Once outside Central London (Zone 1), good wine shops become increasingly dispersed, so the burgeoning growth of on-demand wine delivery is great news for local drinkers. It’s going to be at least a year I suspect until any of these services reach my door in Zone 3, but I can’t wait until they do.

One-hour delivery will give me a sense of spontaneity and freedom that current next day/next week deliveries don’t. And I’ll be able to free up some space at home – there’s no need to store as much wine when I can get exactly what I want within 60 minutes. It can take me an hour or more to visit some of my favourite independents just to fetch a couple of bottles: that’s a good part of my Saturday. It will free up a couple of hours every weekend and I don’t mind paying for that. Shopping for wine is a pastime I enjoy – but not as much as spending time drinking it with friends.

Don’t get me wrong, I still love visiting wine shops where I can taste, drink, eat and chat to experts. But 1-hour delivery will inevitably mean we visit wine shops in person less often. Once delivery prices come down, I’m sure many people would sooner request a delivery than walk 10 minutes down the road. Retailers are going to have to work even harder to justify asking us to spend time travelling to them. The best will doubtless continue to thrive, but those that don’t adapt will be the ones you see boarded up from the window of your driverless car.