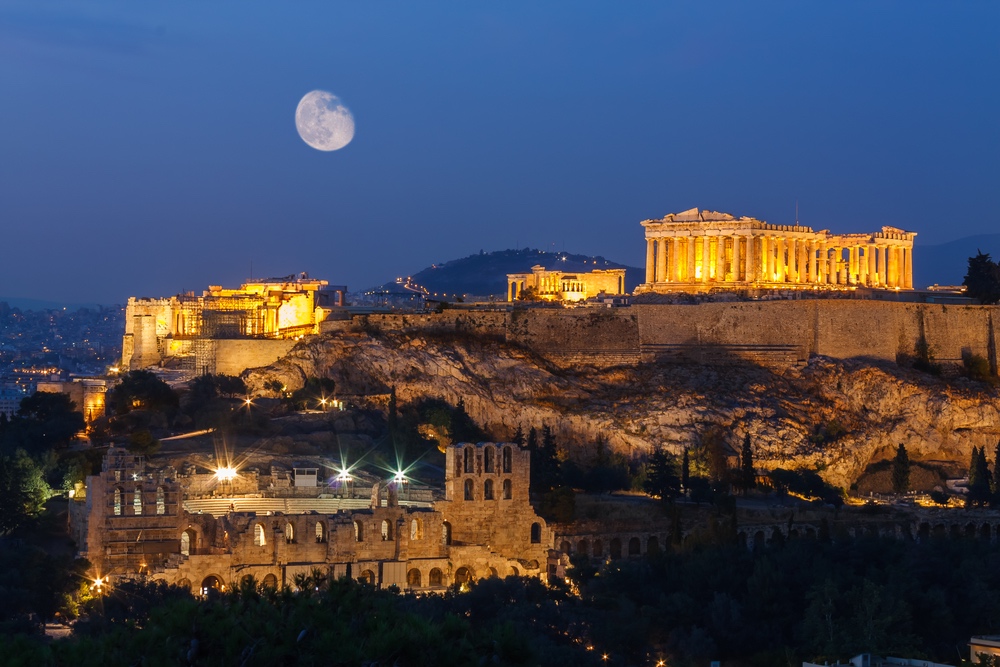 Let me invite you to a concert for the world’s smallest bouzouki. Rationally, I know full well that whining about not being able to travel in these circumstances is akin to complaining about the humidity during a tsunami. Yet, sometime around May, with a couple of trips already cancelled and even the hallowed summer sojourn looking in jeopardy, my apartment windows felt like they were lined with invisible bars. It wasn’t just about lost opportunities for work and play anymore: it felt like fundamental assumptions about living abroad in the 21stcentury were being challenged. Globalisation wasn’t meant to include lockdowns.

So, I lay on my couch one evening, opened Google Maps, and started fantasy-travelling. I planned an imaginary perfect summer trip, and the wineries I would visit along the way, and the wines I would drink. I would stick to whites and rosés: Greece in the summer is rarely a place for reds.  And I would taste the current vintages of both old favourites and new discoveries.

But what would such a trip be?

My starting point would be Thessaloniki. One of my most surprising moments in the UK was listening to a BBC2 presenter, Chris Evans maybe, saying he had never heard of the city before. Well, back home it’s that popular that it wouldn’t even settle for Second City status: its moniker in Greek is the “co-capital”. And it’s marvellous, dotted with Byzantine, Ottoman and Greek neoclassical architecture in its cheerfully chaotic centre, boasting the best street food in Greece, and stretching lazily along the Thermaic gulf like a scruffy Barcelona.

Greek wine country proper rests an hour or two by car from the co-capital, but as I am here for a summer holiday, I won’t have time for that.  Instead, I’ll head down to Epanomi, a short hop from the city, to visit Vangelis Gerovassiliou, one of the elder statesmen of modern Greek wine, who taught his countrymen to drink Syrah and turned Malagousia from near-extinct to ubiquitous. If I can, I’ll squeeze in a visit to nearby Monopigado, to meet the newcomers of Moschopolis. And if I have time before my plane leaves, I’ll stop by Kechris in town, to have one of their innovative retsinas.

When I arrive in Greece, initially I want peace and quiet, only blue seas and blue skies. The best places to get this is not the high-profile islands everyone knows, but it’s also not the small ones that have 500 locals in the winter and 5,000 hipsters in the summer. Instead, it’s the ones that are big enough to sustain a vibrant local community, but not popular enough to be on every tourist agent’s radar. And the best of those are near the Turkish coast, on the infamous “non-profit line”, so called because allegedly no private ferry provider would touch it of their own volition. I would start with Lesvos, one of the most beautiful islands in the Aegean. For most Greeks, this would be a surprising place for wine: it’s famous for its ouzo, perhaps the best in the country. But they do have some, and it is different, and wild, and good. I only found out recently that Methymnaeos have their vineyards on the volcanic part of the island. Maybe that explains it. Then it would be time to catch the night boat to Ikaria, a space/time warp of an island whose rhythms make the rest of the Aegean look like Midtown New York. Wine is not synonymous with Ikaria either, bottled at least. But there is some indeed, by Afianes, and like its Lesvos counterpart, it’s fresh and vibrant and different.

I am rested now and I can finally enter the Cyclades. I’ll start easy, with Syros, and stay at Ermoupoli, the capital of the island complex, then take a trip to the OuSyra winery, to try rosé from Fokiano and white from Serifiotiko. Maybe I’ll take the short trip to Paros, an island once famous for its wines, and one I believe we’ll be hearing from again. But the main destination is Santorini.

I know. You expect me to write about Asyrtiko. I have written before about the royalty of the Greek vineyard, and I’ll write again when I am back on the ground. But, in this fantasy trip, I am not after fine dining and vinous perfection, I am looking for the Santorini of the everyday, the tavernas with plates of yellow fava, white aubergine, and the tastiest cherry tomatoes in the world. I’ll be accompanying them with Aidani, the squire to Asyrtiko’s knight. Name your favourite Santorini producer, and by now they’re probably producing a monovarietal Aidani too. Argyros and Hatzidakis probably lead the way, but Gavalas andSigalas are also worth trying. And, if fried fish make it to the table, many producers make Asyrtiko/Aidani/Athiri blends. Vassaltis’s Nassitis and Argyros’s Atlantis are two excellent examples.

Then, it’s finally time for Crete. From all the destinations of this trip, Crete is the one I regret the most, because it’s the wine region I know the least and I was planning to start finally addressing this deficiency this year. Cretans are fiercely proud of their island and its products – perhaps a bit too much, as the confidence meant they missed the first round of modernisation in the 1990s. The real transformation came a bit later but now its fruits are there for all to see. Abroad, Cretans often seem better known for riding the Asyrtiko wave, theirs usually sweeter, rounder than the Santorini original, like the one from Diamantakis. But the strength lies in their native varieties. Indeed, it’s Vidiano that should be the island’s calling card: clear, mineral, lightly saline and lightly citrusy, I think of it as Baby Asyrtiko. Karavitakis’s Elia is one of the best, but Diamantakis is not far behind. And then there are all the other native varieties. Manousakis, for example, does a good Muscat of Spina. But the king of this is certainly Lyrarakis, not an unfamiliar name to UK wine drinkers. So, I would sit back, looking at the sea, and enjoy the contrast between the rich and generous Thrapsathiri and the austere, dry Plyto. And then I would have a glass of Melissaki, the most impressive Greek skin-contact white I have had yet.

So, I’m back to Athens, just off the boat, and thinking that maybe I need to stay for a couple of days. My affinity for Attica’s retsina is no secret, but I have yet to write properly about its main grape, Savvatiano, in its unresinated version. I have a soft spot for Mylonas’s classictake (so much so, in fact, that I served it at my wedding), but, to those unconvinced, I would show Aoton, so they can see for themselves just how versatile, expressive, and rich Savvatiano can be.

I should be getting back to the UK, I really should. But have I seen Greece in the summer without seeing the Ionian blue? Maybe just one swim in Kefalonia. Maybe a glass of Robolafrom Gentilini, or Vostilidi from Haritatos. Maybe I’ll just stay a bit more.

Diamantakis wines are imported by Vindependents

OuSyra, Sigalas, and Mylonas are available from Maltby & Greek

Lyrarakis wines are available from BBR

Hatzidakis, Karavitakis, Gentilini, and Moraitis are imported by Eclectic Wines