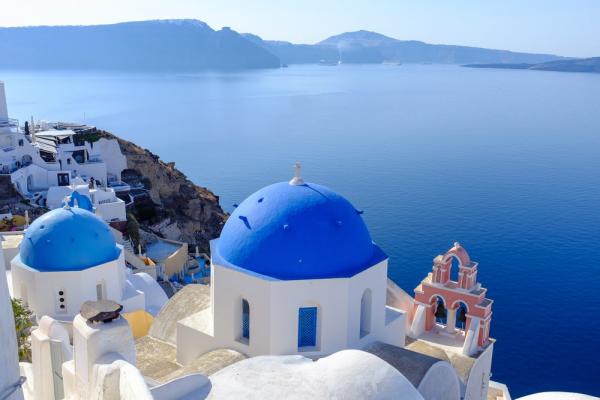 A staple of wine lore is how much better wine tastes at the place of its production. The bottle of Chianti at a villa in the Tuscan hills; the Provencal rosé in an ice cube-filled plastic bag at the Cote d’Azur; maybe a glass of Zin at a sleek tasting room in Paso Robles. Grapes like a scenic backdrop and a sweet climate. There is, however, a terroir so stunningly beautiful, so famous for its whitewashed houses and gorgeous sunset, that most of the thousands of tourists that flock to it each year have little idea that it is also home to one of the great wine grapes of the world.

The one wine-related luxury I allowed myself as a student was a yearly pilgrimage to Santorini to taste Assyrtiko* in situ. I found the brief pause between the end of Easter and the start of the summer season best: warm enough to enjoy the Aegean, yet cool enough to allow for long walks to the vineyards. The estates were in transition: a few had tasting rooms, albeit modest, but others felt simply like walking into someone’s cottage. One could just bump into a local superstar like mathematician-turned-winemaker Paris Sigalas; the maestro would even have the time and kindness to reply to a 20 year old’s silly questions. The wine was consistently good across the island and, for a terroir already achieving international recognition, fantastically cheap. At night, the bars at Fira were full and, unheard of for a tourist spot, served a great house white. Life is good in the Cyclades.

Any introduction to Santorini needs to start with the uniqueness of the vineyards, before proceeding to the wine itself. In an industry dedicated to highlighting often minute differences, this ancient terroir can lay claim to being something truly different. Many first-time visitors are surprised to find top quality-wine produced here; the island, a volcanic, wind-beaten rock in southern Aegean with little vegetation and even less water, does not appear to be typical wine land – and, indeed, it isn’t. The yields are very low, due to the water scarcity. The vines are trained in circular arrangements known locally as kouloura (rings or baskets), close to the ground lest the etesian winds blow them away. Plus, the Assyrtiko vineyards are practically immune to phylloxera and were never grafted; these are the original vieilles vignes.

Santorini whites come in four versions. The core is the dry white Santorini PDO: either Assyrtiko-dominated or exclusively Assyrtiko, it comes with lemon and salt notes on the nose, a body that combines texture, power, and intensity, and just the right amount of astringency on the aftertaste to make it a natural match for fried fish. Most producers also offer a barrel-fermented variant: though somewhat controversial amongst purists, who find that the barrel removes something of the uniqueness of the grape, at their best these are exceptional wines, superior to many a white Burgundy at a fraction of the price. These are a great match for the more noble offerings of the Aegean, such as grilled sea bream or grouper; suitably aged, they become an excellent accompaniment to turbot or tuna. A third variant called nychteri (roughly: “all-nighter”), is high-alcohol and comes from ultra-mature grapes. It’s overpowering, even bewildering, for some but if you have an affinity for New World Riesling, give it a shot; you might be impressed, and it’s the rare Greek white that I find can accompany Malaysian food. Finally, some producers are experimenting with the supporting cast of the PDO, Aidani and Athiri. These two varieties might not typically reach the finesse and power of Assyrtiko, but produce intriguing wines on their own, which are also a great accompaniment for the local produce. The latter quality is an important asset as Santorini’s uniqueness does not stop at grapes. Its cherry tomatoes, white aubergines, and fava** are just a small part of the rich gastronomic tradition of the island.

The ageing potential of Assyrtiko is debatable. Common recommendations go between 4 and 8 years, and one of the advantages of the wine is that, like most whites, it’s great on release and doesn’t need ageing to be rewarding. As often though, I find myself bowing to the wine wisdom of Hugh Johnson. A firm believer of the ageing potential of the grape, he has observed the remarkable similarity of 10 year-old Assyrtiko with similarly-aged Chablis Grand Cru.

While Greek wine is one of the few weaknesses of the UK merchant scene, Assyrtiko is a happy exception with even some super markets offering bottles that serve as decent enough introductions. Waitrose does the standard PDO by the late Haridimos Hatzidakis, a trailblazer who saw the potential for high-end bottlings before most. Marks and Spencer stocks Atlantis, the entry-level Assyrtiko/Athiri/Aidani blend by Argyros and a decent value-for-money especially given the price Santorini commands these days. The real skill of the producer, however, is demonstrated by his grand oak-fermented bottling, for my money the best example of its type, stocked by Roberson in the UK. Another great name of the Santorini renaissance of the ‘90s, and keeping with the more traditional style, is Thalassitis. The standard PDO is available from a few merchants, though I can’t seem to find the oak-fermented version, a more idiosyncratic wine, which ranges from interesting to intellectual depending on the year – it is one of my favourites, but I concede that others might find it too traditional for their taste. The wild yeast-based Wild Ferment though is much more popular and seems to have caught the eye of many a hip sommelier abroad. A third traditional producer of interest is Gavalas, whose entire range is imported by Southern Wine Roads; its Natural Ferment is something of a work-in-progress, but the standard PDO is representative of a good Assyrtiko. On the opposite end stands Sigalas, whose fame and success in the US seem to far surpass the relatively limited impact he has had in the UK. This might be due to the style, a fuller, rounder, overall more generous take, which can be multi-layered in a good year but is a crowd pleaser always. Bridging this stylistic gap is one of the newer entrants in the Santorini wine scene, Vassaltis Vineyards. Their Assyrtiko is clean, sharp, with a strong saline kick, but more full-bodied than the more traditional examples.

The future for Santorini brings both challenges and opportunities. As the wine gains in popularity, local producers that twenty years ago would have been written off, can modernise and reap the rewards, as Karamolegos’s success demonstrates. Often, this means importing expertise from the mainland: Acroterra by pioneering producer Thymiopoulos of Naousa*** fame produced the first Greek white to flirt, controversially, with the €100 mark. Mantinia master Tselepos already has a Santorini on the shelf, the old Canava Chrissou, and earlier this year Northern Greece elite Biblia Chora also announced a Santorini project. Simultaneously, a lot of work is being done in identifying the best plots and creating high-end examples, with Sigalas offering some formidable examples. This comes on the heels of the so-called “premiumisation”: Santorini wines have almost doubled in price the past five years and, even in Greece, it’s not unusual to find standard PDOs at €20+ on the shelf. Predictably, this has led to some backlash, both domestically and abroad: Jancis Robinson was already unimpressed when prices were at £16 a bottle; my local wine storekeeper back home has sworn off Assyrtiko altogether. While I lament the loss of the best value-for-money globally as much as the next wine drinker, it’s hard to fight the numbers: in a world where Abbatucci sells for £50 and there is still a market for yet another over-oaked Californian alcohol-bomb starting at $60, it’s hard to see how Santorini wines cannot command even higher prices.

A much bigger challenge is the lack of land. Assyrtiko might be premium and a global Top 100 for those of us into wine, but the Santorini landscape itself is ultra-premium and in any Top 10 of tourist destinations worldwide. In a reversal of the common theme of the vines bringing in the tourists, here it’s the tourists driving out the vines. Within a century, Santorini vineyards have reduced to a third of their 1900s size and, despite the increased popularity of the wine, the trend does not seem to reverse. Greek MW Yannis Karakasis reckons that some formal intervention is needed to recognise the importance of vineyards and restrict the expansion of tourist infrastructure, so these ancient vineyards will still be there a few decades down the line.

It doesn’t stop at dry whites of course. Santorini might be at its best in the summer, but the island has something to offer year-round. Much the same applies to the wines. Beyond Assyrtiko, the island has rediscovered its red grape heritage, focussing on Mavrotragano. As for dessert, its Vinsanto is one of the sublime sweet wines of the world. But let’s leave those for deep winter; for now, we can enjoy the sun with a glass of white and pretend to be at the Caldera.

* Those of you that follow my Twitter rants might be surprised to see me spelling this “Assyrtiko”, as I hold that the correct transliteration to English should be with a single S (“Asyrtiko”). The story behind this is fairly long and outside the scope of this piece. In order to explore this further I have contacted people much more qualified than, however, I’ve not received responses in time. Until the truth shines, I defer to the more popular version, which is used by the canonical sources.

** Random food trivia: Santorini fava does not refer to broad beans but to a variety of yellow split peas native to the island.

*** I relented on Assyrtiko, but on Naousa I stand firm. Single S.