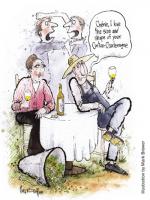 The comedian John Cleese once published a conversational if surprisingly serious book called “Families and how to survive them”. You don’t have to be Sigmund Freud, or a member of the Monty Python team, to recognise that relationships between siblings, parents and their offspring are frequently no laughing matter, especially when money, land and inheritance are involved.

Familial bonds are notoriously fragile in the wine world. To take only one famous example, the late Robert Mondavi took his own mother, brothers and sisters to court in 1972 to secure what he saw as his and his children’s birthright. The fighting didn’t stop there. Anyone who has read Julia Flynn Siler’s excellent book about the family (“The House of Mondavi: The Rise and Fall of an American Wine Dynasty”) will know about the subsequent stand off between two of those children, Michael and Tim, and how it damaged the Mondavi empire.

In a business where the day-to-day returns are often meagre, the temptation to sell is always there. The larger the cheque – and the growing participation of cash-rich Chinese buyers will increase the potential pay out – the greater the temptation to flog the family gold, or rather stainless steel.

You can see why people give up, and not always for millions. If generations of your family have spent their lives ploughing, pruning and picking for little reward, the prospect of more of the same, ad infinitum, is only slightly less appealing than a root canal operation. That’s why so many growers in Europe’s less glamorous regions are prepared to take the modest subsidies from the European Union to pull out their vines. The bucolic lifestyle palls after a while.

And yet the families who leave the wine industry are outnumbered by the new recruits, particularly in the New World. I’m always amazed by the hoards who want to have a go at making wine. Sure, in some cases their wineries are little more than vanity projects, but most people are genuinely committed to the business. They may be one sandwich short of the full picnic basket on occasion, but a little eccentricity is no bad thing. If it were just a question of balance sheets, of simple profit and loss, no one would choose to make a living from wine.

But what about the families who’ve been doing it for much longer? I’m talking about clans like the Chaves in the Rhône, the Hidalgos in Jerez, the Antinoris in Tuscany, the Parents in Pommard, the Henschkes in the Barossa Valley, the Trimbachs in Alsace and the Blandys in Madeira. These are people with a deep commitment to their respective region, who have steered dynasties through centuries of fluctuating economic, national and personal fortunes, disproving the rule that family businesses seldom survive for more than three generations.

This is no easy feat, particularly in countries like France and Portugal that still use the Napoleonic Code, stipulating that land (and assets generally) should be divided equally between heirs. Holding a domaine with more than 30 different owners together, as Anne-Claude Leflaive has done in Puligny-Montrachet, requires the negotiating skills of an international statesman, not to mention a steely sense of purpose.

Even when there are fewer interests at stake, decisions are a matter of negotiation. Pierre Trimbach is thinking of releasing a Grand Cru Riesling from Geisberg later this year – the company has always eschewed the grand cru system in Alsace – but needs the agreement of his extended family. “First I have to convince my brother, uncle, daughter and father,” he says.

For a family with expensive vineyard holdings it must be tempting to resort to abstinence or contraception – one of these messages easier to preach in a predominantly Catholic country than the other – just to keep the next generation to manageable proportions. I don’t know many Burgundians, Champenois or Bordelais with six or more children.

In France at least, there are ways to lessen the impact of the code by grouping assets – known by their acronyms, GAEC, EARL, SECA and GFA – but it remains a headache. The code is largely responsible for the shifting pattern of vineyard ownership in Burgundy, not to mention the bewildering proliferation of domaine names. No wonder it’s said that Burgundians sometimes marry for terroir rather than love. “Chérie, I love the size and shape of your Corton-Charlemagne.”

Somehow, family enterprises survive and even prosper, battling against globalisation, national laws, financial predators and their own dysfunctions. So spare a thought for the people who keep the flame of inheritance flickering. Some of them struggle to protect it, some of them watch it gutter and die, while others fan it into a brilliant, blazing inferno, transforming the work of previous generations. But all of them deserve our thanks. Family companies are the beating heart and soul of the wine business. Long may they continue.