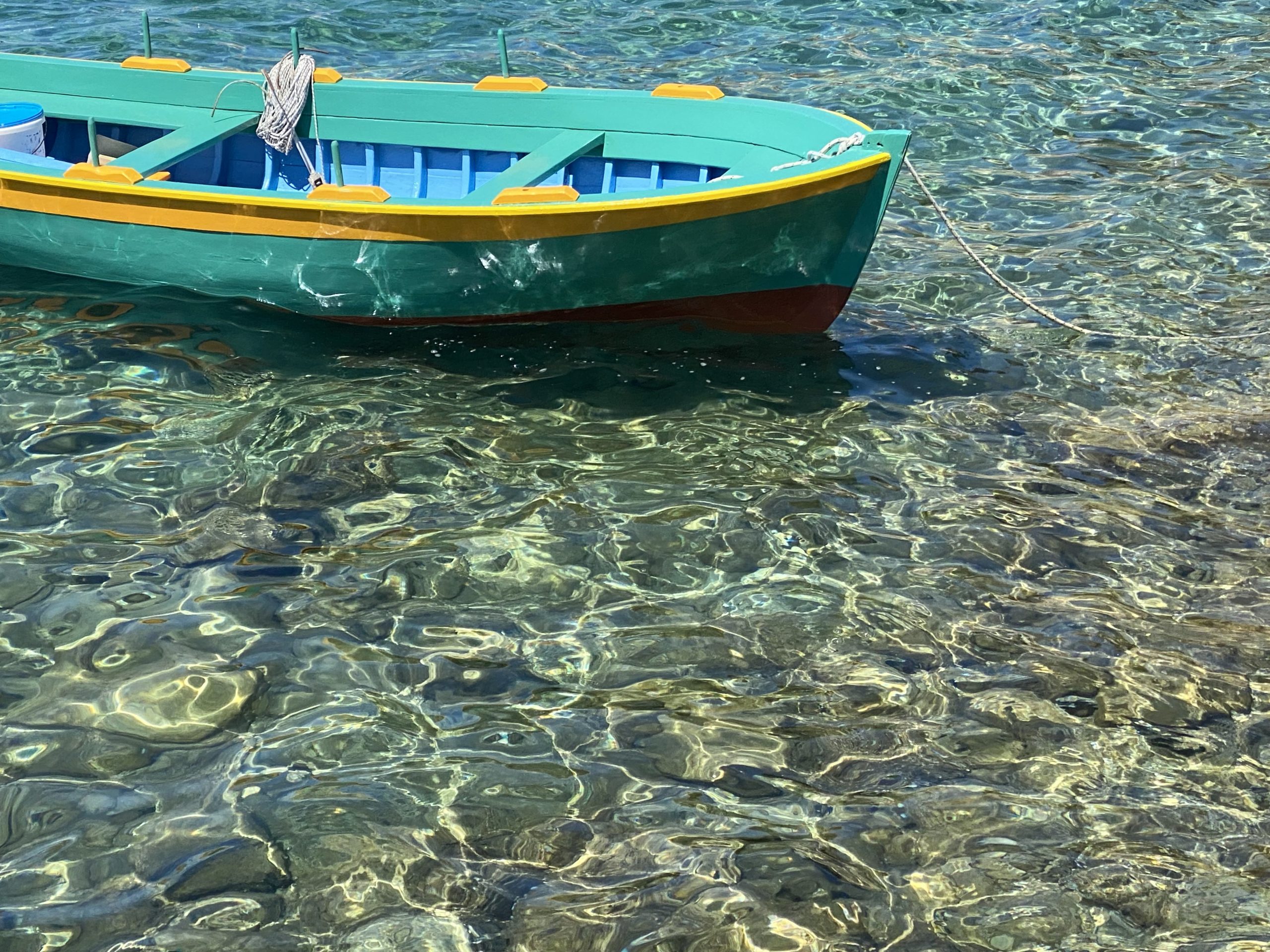 Brač is the largest island in the Croatian archipelago on the Dalmatian coast, and just eight kilometres (around an hour by catamaran) from the easily accessible and beautiful city of Split. Famous for its beach tourism (Zlatni Rat, a spit of gold on the south coast is frequently described as one of the best beaches in the world, and is familiar even to those who have never been there as its photo has been reproduced so many times), Brač is also known for its brilliant white limestone, largely quarried from Pučišća on the northern side of the island. This stone was employed in the construction of the Unesco World Heritage Diocletian’s palace in Split, and has been used in the thousands of years since for construction across the island and the world. There is even a much claimed tale that it was Pučišća stone used to face the White House in Washington, although there seems to be a degree of wishful thinking involved in this story. But stone, especially limestone, with its curious ability to be both water retentive and free-draining, is a perfect environment for the vine, and while Brač’s soils may not be as famous as Andalucia’s albariza does for Sherry, they are still pretty special.

Wine, of course, has long been a part of the rich culture of this part of the world, with its Roman, Venetian, Hungarian, Slavic and French periods all on display in the architecture, literature and cosmopolitan feel.

In wine terms, however, the islands of Korčula, Vis and Hvar are possibly more famous than Brač, partly because they lay claim to indigenous varieties (although both Hvar and Korčula claim Pošip), and partly because, in Korčula’s case, they escaped phylloxera in the late nineteenth century, which devastated Croatia’s wine industry just as it did everywhere else. Master of Wine Jo Ahearne makes wine on Hvar, among other of Croatia’s best known producers. Many people left Brač after phylloxera struck and, even today, there are more people from the island in Chile than there are still on the island.

As a result of this exodus, and against the backdrop of the socio-political upheavals of the early twentieth century, the remaining wine families formed a co-operative in 1903. Although there are other individual wine producers on the island, it is this co-operative, or rather, what it has grown into, that accounts for the vast majority of the island’s wine production.

Based in Bol, an exquisite sun dappled Dalmatian town on the south side of the island, the winery is a commanding building right on the waterfront, and dominates the view of all the arriving boats. When constructed it was decreed that it had to remain as a winery, with a school on the top floor, and could never be sold off for conversion into an hotel or anything else (as might well have happened otherwise, given its situation). Winery, and school, it remains today.

Unfortunately, the rest of the twentieth century was not especially kind to Croatia, although it always stood out as perhaps the most beautiful and untouched part of Yugoslavia. The winery fell into disrepair and was finally shut during the Balkan war. Many of the vineyards gradually died too.

It took some considerable time after 1995 to resuscitate the winery, and the replanting of vineyards happened in tandem. The winery kept its name of ‘Bolski’. Paul Robert Blom remembers importing the wines into the Netherlands shortly after, only for the threat of legal action by Dutch Liqueur maker Bols to force him to stop.

The dramatic renaissance however, happened in 2009, when Croatian hotelier Jako Andabak purchased the lease on the building. A comprehensive restoration and modernisation from the cellar-up, and in tandem with a vineyard revitalisation, was begun. At the same time the new name ‘Stina’ (stone) was coined and the startling, largely ink-free, packaging – winner of multiple international awards since – was created by the renowned Croatian design studio Bruketa & Žinić.

Brač has the highest point in Dalmatia at 780m, and some of the very best vineyards are towards the top, above 500m, cooled by coastal breezes, and digging straight into the limestone from which they draw cooling water and minerals.

Croatia’s most famous vinous export is a particular grape variety, the discovery of whose precise parentage continues – so it seems – to evolve.
California’s Zinfandel was remarked upon by Croatian-born Mike Grgich as resembling in every way the Plavac Mali of his homeland. In fact, he was mistaken and Plavac Mali is the offspring of the grape known in Croatia by the catchy name Crlenjak Kaštelanski (crossed with also-indigenous Dobričić). It likely arrived in California, however, in Italian hands, as it also grows across the Adriatic in Puglia as Primitivo. DNA research by UC Davis’ Dr Carole Meredith proved that it has yet another synonym in Croatia itself: Tribidrag. Slightly more recent news is that they are all the same as a variety from Montenegro called Kratošija.This last name was first recorded in the thirteenth century, which pre-dates all the others, so it may not be, exclusively at least, Croatian after all.

Tribidrag and Primitivo both mean ‘early’ while Crlenjak and Plavac mean black/blue. Both attributes are true, but each can shape the flavour of the resulting wine. No-one knows where the name  Zinfandel came from.

On Brač it grows as Tribidrag, and the only successful variety on the exposed, cooler northern side of the island. They have plantings of the other regional varieties, majoring on Plavac Mali and the two white varieties, Pošip (light, fresh, Gruner-Veltliner-like) and Vugava, which has a distinct reminiscence of Grenache Blanc grown in coastal Roussillon.

The traditional highlight is a dessert wine, made from mixed black and white grapes, dried for 100 days in the sun to produce a deep coloured liqueur-textured elixir. The Croatian name for this is Prošek, but despite having been called so for centuries (millennia, claims one producer), this term is now banned for sale in the EU. Because it sounds like Prosecco, apparently. The two wines could scarcely be more different if they tried, but Stina have cunningly rechristened their fine, luscious example as ‘Exprošek’.

The wines are available locally, and – come 5pm on an afternoon in the tourist season – it is a wonder they are not 100% sold in situ, because the winery becomes theplace in Bol to have an ‘apéro’, but some gets exported across Europe and to the UK

(Prices below retail at the winery.)

Pošip 2019 13% 170HRK (€22)
Very dry. Some phenolic. Citrus and white flowers. Sage and some thyme. Fairly fruity and straightforward, but well made and pleasant. 85

Vugava 2019 12% 150HRK (€20)
(Grape originally from Vis, and only grown there and on Brač).
Some saline, pith and floral fruit aromas. Mineral and rather like the example from Vislander. Quite delicate fruit. Good acidity and structure. Some faint orange blossom tang on the finish. Slightly saline edge. Good. 88

Plavac Mali Majstor (‘Master’)2017 14% 220HKR (€29)
Selected grapes 18 months new oak
Hugely different. Rich and oaky aromas. Some plum and damson. Just a trace of raisin. Rich and concentrated. Streets ahead of the basic wine and well worth the difference. 88

Plavac Mali Remek Djelo (‘The Masterpiece’)15.5% 2016 560HRK (€73)
Selected vintages, so far 2009, 2011, 2016 only. Only best vineyards and barrels of the Majstor. Then further 6 months in oak. 2016 only 5000 bts.
Super rich and concentrated aromas. Plenty of spicy oak, but backed up with rich and extracted fruit. Hint raisin and menthol/chinato. Complex and rich. Powerful extract and deep structure. Possibly just a bit too rustic for this ambitious price, but a very sumptuous and delicious wine. 91