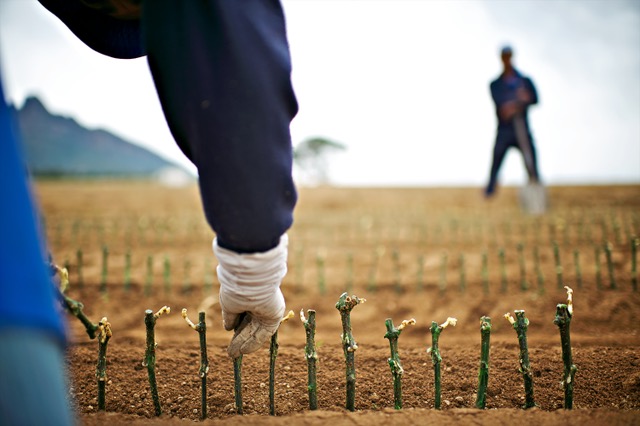 Do you have any bottles of South African wine in your cellar? Go and have a look at the certification seal (usually attached to the neck of the bottle). It’s more than likely that at least one of those bottles will bear the slogan “Sustainability and Integrity”. This phrase appears on every wine that has passed the requirements of the IPW certification (Integrated Production of Wine). The IPW seal is a certification that only deals with environmental concerns, and issues like water usage; there are no requirements related to human working conditions, or worker compensation. But in a country with the worst wealth inequality in the world*, the idea of a wine that embodies both sustainability and integrity surely loses all meaning if it doesn’t protect the humans that made it.

South Africa’s wealth inequality has been widely publicised in various forms over the last 20 years, but the unfortunate truth is that the wine industry forms an even more concentrated microcosm of this inequality. After all, many of Stellenbosch’s most lauded estates are owned by some of the richest people in the country, while the vineyards on these estates are harvested by some of the poorest.

But raising this fact in polite conversation triggers great outrage in wine circles for two reasons:
1. Because it overlooks the very real progress and transformation that is being made in small pockets within the South African winelands.
2. Because it’s true (despite the efforts mentioned in point 1).

My intent in raising the topic here is neither to blame institutions, nor to induce ire, but simply to ask the question: Is it not time that consumers and producers alike enlarged their thoughts about “Sustainability (and integrity)” to include protection for both human and environment alike?

“But let’s be realistic…”

When discussing a topic like wealth inequality, a cynic might point out that this problem is as old as humanity itself, sewn fast into our very nature, and that raging against it is a sweet but ultimately ineffectual quest. But when one witnesses a shining example of people who have chosen to ignore the cynics, defy the dismal global statistics, and use sound economics to redefine what is “sustainable”, it makes me want to believe that we can sew ourselves a new nature. More than that, it makes one ask, “Why isn’t this model standard practice?”

Imvini-Wethu is exactly such a project. It’s an ongoing collaboration, founded in 2020, by a group of German wine professionals, who were seeking to alleviate the strain on the South African wine industry during the COVID-related alcohol bans. The goal was to produce a wine in South Africa, sell it in Europe, and have a percentage of the profits be directed towards training young winemakers, viticulturists, and vineyard workers in South Africa.

Four things are important to note with regards to Imvini-Wethu:

1. With the exception of winemaker Andrea Mullineux and viticulturist Rosa Kruger donating their time, each party was paid for their contribution to the project, and the costs of all logistics and components were fully covered.
2. The various parties were all paid up front.
3. The components were of an incredibly high quality. The wine produced was a premium Cape Blend, blended and curated by a world-famous winemaking team (Andrea and Chris Mullineux), produced from Certified Heritage vineyards, marked with the pioneering Old Vine Project seals, and packaged by arguably the most critically acclaimed design agency in the Wine Industry (Vollherbst).
4. At €16.99 per bottle, the price point was far from greedy, and at the time of publishing, the product was 80% sold out. A noteworthy achievement, given that it was only launched in January 2021.

André Morgenthal, the current Managing Director of The Old Vine Project (both a facilitator and beneficiary of the Imvini-Wethu project), often talks about “planting to grow old”. The adage is used to express how every decision made when planting young vines – from cultivar, to location, to pruning, to soil management – should be made to ensure that those vines reach old age. In this sense, Imvini-Wethu is the economic and social manifestation of this viticultural ethos. It occurred to me that the very idea of “sustainability” cannot exist unless this level of care is applied to both one’s workforce and one’s vineyards.

But this idea is not to be confused with charity, which is, in itself, not sustainable. Stellenbosch winemaker and biodynamics pioneer Johan Reyneke underscores this beautifully: “Sustainability cannot just be about nature itself…In my view sustainability is a three-legged chair. (1) You need to look after nature; (2) you need to look after people; and (3) you need to look after your money. If you’re missing any one of those legs, the chair is going to fall over. Unfortunately, we get away with exploiting nature the longest. You can also exploit humans for a time. But the moment you run out of money, your business is over. And perhaps this is why this element carries so much weight…But in the end it boils down to respect, or empathy, or even just an awareness of the environment in which one lives…”

Listening to him seamlessly connect the needs of business owners, vineyard teams, cellar hands, and the land itself, makes it very difficult to see the notion of sustainability any other way. Movements like Certified Organic in the South African context have been dismissed as greenwashing fads that cater to “the 1%” and do little to address the plight of the poor. But if one adopts Johan’s vision for “sustainability”, it becomes impossible to do that.

Encouragingly, there are a growing number of producers in South Africa that share this position. A project launched by Diemersfontein Estate in Wellington, called Thokozani Wineland Investments, saw Diemersfontein employees given the option to buy shares in the independently formed company. In November 2020, Thokozani Wineland Investments had generated sufficient revenue to buy a 55% majority shareholding of the Diemersfontein Wine brand. The company developed the slogan “Own the brand; work the land”, which manifested itself in the most gratifying way when Thokozani’s Cabernet Franc 2019 garnered three highly coveted Old Mutual Wine Show Trophy awards (including Best Red Wine Overall for 2021). The wine was sold out within weeks of the announcement, and saw a significant boost to the revenue funneled into community projects, food distribution schemes, healthcare plans, as well as dividends paid to shareholders.

“It’s taken us 18 years,” explains MD Denise Stubbs, “but one can feel the momentum now.”

As was the case with the Imvini-Wethu project, the high quality of the end product seemed to be a key factor in the success of the initiative.

Chris and Andrea Mullineux, while working with Imvini-Wethu, were already half-way through the development of a Project called Great Heart, which involved registering a company that is 100% owned by the employees who work for Mullineux & Leeu Family Wines. While the project is in its infancy (the first Great Heart vintage shipped in January 2021), the business is already in a position to pay dividends, which for some members would equate to an additional month’s salary each vintage.

During the development of the Great Heart project, the Mullineuxs were inspired by South African Wine Legend Paul Cluver, who as far back as 1995 had developed a Black Empowerment project called Thandi Farm on land that was donated by the Cluver Family. Thandi Farms launched Thandi Wines in 2003, which was greatly publicised as the first registered Fairtrade wine label in the world!

But probably one of the largest and most prominent examples of sustained empowerment has to be Bosman Family Wines, which, with investment from the South African Government has transferred 26% of the Bosman family holding company (Bosman Adama) over to a trust (the Adama Apollo Trust). This trust is directed by employees on the farm. Ownership was transferred to the trust in 2008, and 12 years later the Bosman Family established two more companies – Adama Wines and Natasha Williams Wines – both of which are run by women of colour, who were already working within the company. The value of the Adama Apollo Trust shares have doubled over the last 12 years, and the business continues to grow.

Our vines; our problem

But for every success story, there are harrowing tales of loss and insolvency. The Solms-Delta wine company, which was loudly praised by both the corporate sector and government as a shining example of transformation, went into liquidation in 2018 amidst a shroud of controversy. Between 1995 and 2007, Paul Cluver’s trailblazing Thandi Wines shifted from a Cluver-funded project to a “thriving stand-alone business”, but by 2018 it had ceased trading altogether. Sometimes even fair trade isn’t fair enough.

Between 2020’s COVID-related sales bans and 2021’s riots, looting, and continued alcohol sales restrictions, South Africa’s wine industry is under enormous pressure. Wineries across the winelands are closing their doors, which in turn adds fuel to the inferno that is South Africa’s unemployment rate. According to Bloomberg, it is now the highest in the world. The statistics are just the right amount of dire to cultivate vigorous apathy in the very people who might be able to make a difference.

“How can we share the profits? There are no profits! We have nothing to give.”

And these protests are all true and valid.

But it’s in this dismal light that a name like Imvini-Wethu becomes so crucial. The name means “our vines” – an implicit declaration that whether contractually stipulated or not, the vines are communal. It doesn’t say that there won’t be setbacks or suffering. Both are already widespread. But it acknowledges that whatever lies ahead must be shared. In an ideal world it would be delightful to share profits – and we have seen projects that are achieving that – but in the absence of profits and prosperity, many forget that sharing in each other’s suffering can be every bit as redeeming.

In this vein, Johan Reyneke left us with a parting thought:

“One of my favourite quotes comes from The Life of Pi. In the book, there is a stone archway with a statement engraved on it, ‘Nil magnum nisi bonum’, which means ‘there can be no greatness without goodness.’ And I really believe it. Honestly, we’ve had a lot of problems [at Reyneke Wines] with COVID; with us not being able to sell wine…and if you look at the numbers, you want to pull your hair out! You ask yourself, ‘what have I signed up for? What am I even doing?’

But then you go for a walk on the farm and see the people who work there, and you enjoy the rapport with them, and you see all the teams that are employed by the business…those are the things – personally speaking – that carry me through the difficult times much more than a hunger for money or success ever will.”

As Imvini-Wethu prepares to ship its second vintage of wines over to Europe, and as projects like Great Heart and Thokozani roll on, I have become convinced that it won’t be regulations, or certifications that will see the South African wine industry prevail. In error, I began this piece by suggesting that certifications like the IPW should be structured to cover issues like employee compensation and working conditions. But these are the sorts of problems that can only ever be solved from within.

Looking at the projects that have achieved the most success in these areas, their common denominators are (1) honest intentions, (2) an attractive product of high quality and (3) a willingness to be proactive in their responses to the needs of the communities around them. These projects are not initiated by people who wait for external regulators to place imperatives on them. These are people who see the need and act to meet it; to restore dignity where it has been stripped away.

The future of South African wine belongs to producers who can grasp now and internalise the realisation that there is no “sustainability and integrity” without the preservation of both human beings and their inherent dignity.