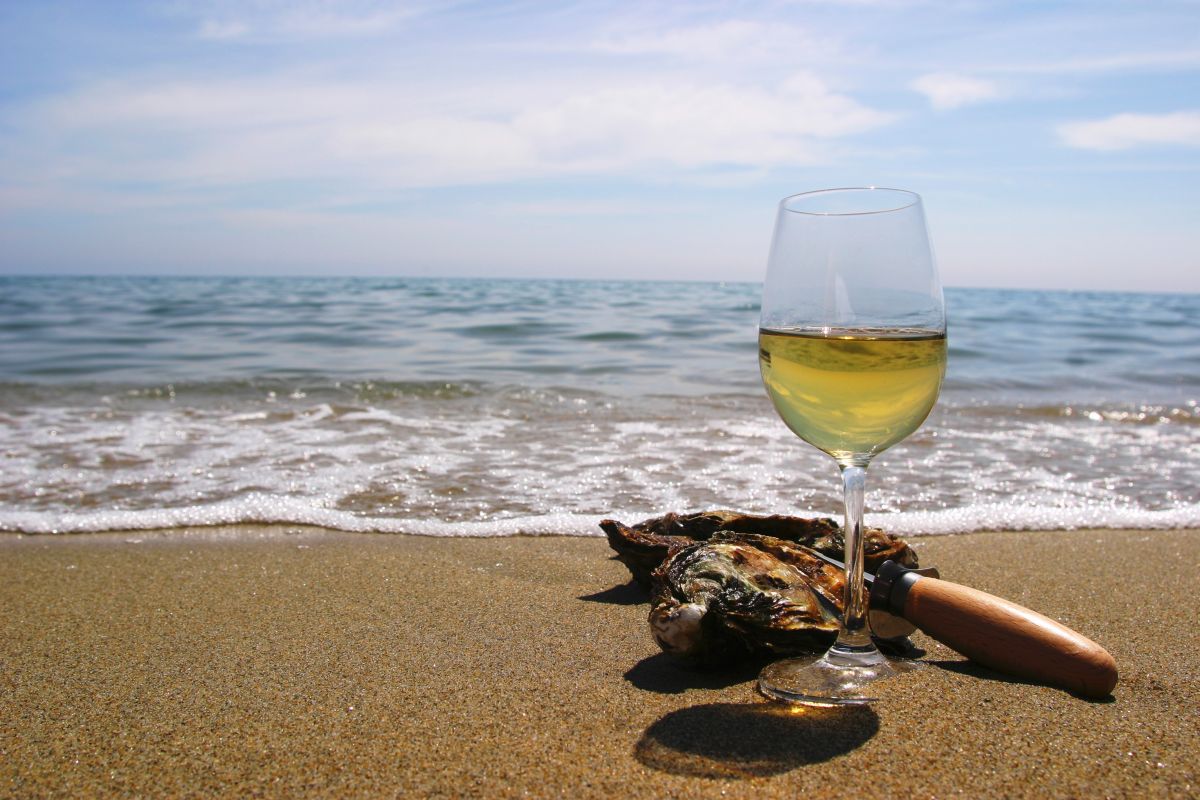 Like a weathered George Michael cynically observing a shiny young Justin Bieber, Muscadet must be thinking to itself ‘been there, done that’. After its 1980s heyday of wild success, Muscadet has seen some hard times, but young upstart Picpoul de Pinet seems to have everything going for it. In many ways, however, they are very similar; vineyards by the sea, growing a grape variety unique to them, making cheap, zesty, fresh whites that work well with seafood… so much so that Picpoul is sometimes referred to as ‘the Muscadet of the South’. It’s a phrase that must chill Picpoul to the bone. Should it worry about suffering the same fate as Muscadet?

The vineyards of Muscadet lie mostly southeast of Nantes, close to where the silvery Loire drains into the Atlantic at Saint-Nazaire. The cool, northerly climate helps their Melon de Bourgogne grapes retain their acidity, but the cold weather can also prove perilous. Its generous crops of a fairly neutral yet refreshing wine made it the Pinot Grigio of the 1980s.

Production was ramped up by any means necessary to meet demand; high yields, chemical fertilisers, planting on unsuitable land. In 1987 alone 103m bottles were produced (that’s half the amount the whole of Burgundy produces today). But in 1991 it was struck by a fierce frost; just 28m bottles were mustered that year. There wasn’t enough to go around, and short-sighted producers raised their prices. As Muscadet lost listings with retailers around the world, there were plenty of exciting New World wines to take their place. The following year resulted in a massive crop, and prices crashed. With Muscadet’s image in tatters, exports withered. Vineyards were abandoned. Like a stoned George Michael stumbling out of a crashed car, by 2010 Muscadet was all washed up.

Overlooking the Mediterranean, Picpoul doesn’t rely on a cool climate for its acidity; it’s a natural characteristic of the grape. As Muscadet has shown, there seems to be an unquenchable thirst for inexpensive, fresh, saline whites in the UK. Now it’s Picpoul’s turn in the limelight: from 1995 to 2013 production has steadily increased from 4m bottles to 9m bottles. Its seductive connection with the relaxed south of France has no doubt added to its appeal.

The UK is now Picpoul de Pinet’s biggest market. You can find it in shops and restaurants across the land, but Tesco has been the driving force behind its success, alone selling over 1m bottles a year. Anne Burchett, Managing Director of marketing agency Sopexa UK, points out that Picpoul de Pinet is “immediately enjoyable, but not immediately easy to place in terms of price” for the average supermarket shopper; “who would know the price of a Picpoul?” Muscadet, however, now represents a ‘cheap’ wine for many, meaning prices are held permanently low; crucially, this means there is no room for price promotions to drive sales like there is with Picpoul. Hence the Tesco bear hug.

The principal difference between Picpoul de Pinet and Muscadet is size. Picpoul de Pinet may be the largest white wine appellation in the south of France but it’s only one fifth the size of the titanic Muscadet, and there is plenty more land on which to plant. As Muscadet discovered, having massive volumes to sell might elevate you to a household name, but it can also create complications that end up putting the power in the hands of distributors. This restricted size, coupled with a warmer, more consistent climate might save Picpoul from going the same way as Muscadet.

Picpoul de Pinet still has room to grow for now but demand is strengthening all the time. It’s even stealing ground from more famous French regions; Morrisons recently replaced a Mâcon-Villages with a Picpoul when it couldn’t source the Burgundy at the right price. Naked Wines has already started increasing prices. Wine Director Ray O’Connor explains that “Picpoul was at one point our best-selling white wine. We decided to invest more money in the wine, paying more for quality. This obviously had a knock-on effect on price, and hence a reduction in volume, but regardless of this is it now in our top 5 white wines.” Across the appellation, official figures show that average prices have risen by 10% in the past 5 years.

As more interest is focused on Picpoul, premium styles are starting to emerge. Sally Holloway buys French wines for wine distributor Boutinot, and works with the Cave de l’Ormarine. She says “Picpoul has become a premium house wine and there is no reason to expect that the popularity will not continue… We have listed a sparkling Picpoul this year which has proved successful.” At around £14 a bottle, it’s one of the most expensive Picpouls on the market. Jean-Claude Mas at Domaines Paul Mas also produces a sparkling version; furthermore he’s “venturing into some reserve Picpouls”.

Picpoul de Pinet is one of the few French appellations to include the grape variety in its name. In some ways it’s an advantage as Picpoul de Pinet is easy to pronounce for English speakers. In fact, most people just refer to it as Picpoul. And this could be its downfall. As it increases in price and popularity there’s nothing to stop speculators growing Picpoul outside the appellation on unsuitable land, using chemical fertilisers, cropping it high and selling it cheap on the back of Picpoul de Pinet… A fatal scenario similar to basic Muscadet tarnishing the name of superior Muscadet Sèvre et Maine.

This might not make for much of a moneymaking scheme for now, but as prices rise the threat will become more real. At least stating ‘AOC Muscadet’ on a label requires a certain basic level of wine quality; no so with the word Picpoul. The Picpoul de Pinet appellation is trying to protect and restrict usage of the word, but it’s the name of a grape variety so there’s little they can do about it. The best option open to them is to differentiate their Picpoul as much as possible from others.

Ironically, looking towards Muscadet could give them some pointers of how to achieve this. With the dead wood being cleared away over the past few years, Muscadet is experiencing something of a renaissance thanks to a push towards better quality; lower yields, picking at full maturity, hand harvesting, better attention to parcels and soils – all things that help underline its unique character and put the spotlight on terroir. Top estates such as Domaine de l’Ecu, Domaine Pierre Luneau-Papin and Domaine Joseph Landron are producing some exceptional wines, higher in quality than what Picpoul de Pinet can currently muster. And while its reputation is yet to catch up, you can still pick them up for less than £20 a bottle.

So as it stands, it would appear that Picpoul has little to worry about when referred to as ‘the Muscadet of the South’. In fact, increasingly it should be flattered. Doug Wregg of importer Les Caves de Pyrène goes as far as proclaiming “Muscadet for us has become the Chablis of the Loire.” So, Picpoul de Pinet, how does ‘The Chablis of the South’ sound? Now there’s something to aspire to.