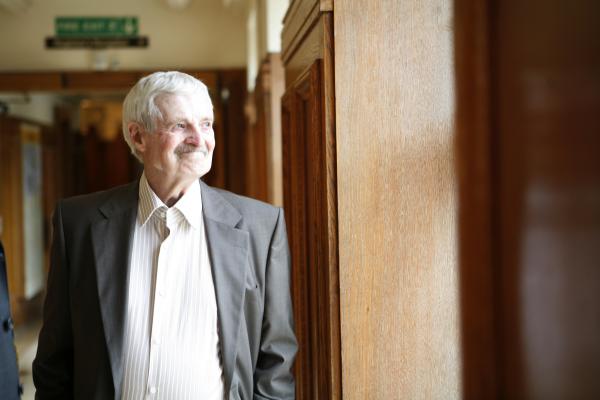 That great American humourist and songwriter Loudon Wainwright III once wrote an hilarious ditty titled “They Spelled My Name Wrong Again”. At the Croydon concert I attended a couple of years back it was the first thing he sang, responding to the neon sign outside the Fairfield Halls that announced the presence of “Louden Wainright“.

Boy, do I know how Louden (sorry, Loudon) feels. Asked by Sports Journalists’ Association chairman Barry Newcombe (or should that be Bryan Newman?) to provide a tribute to the late Laurie Pignon, my emailed piece and the correspondence surrounding it between me, Steven Downes (Stephen Downers?) and Martin Castle (Marvin Castles?) carried the names of Ron Atkins, Ron Aitkin and then the full, four syllable, 11 letter byline I prefer – Ronald Atkin.

It’s been going on ever since my first titled piece in the Nottingham Evening Post back in 1948. Lovingly preserved on our kitchen notice board are the originals of letters and memos addressed to Ronald Gutkin, Roy Atkin, Rod Atkin and even Mr Dorothy Atkin. There is an invoice to Mr R. Hatkin and an accreditation to the Tennis Masters Cup made out to Ryes Atkin.

The Raffles Hotel in Singapore reserved me a room in the name of Ronald Attkini, Scotland Yard issued my security pass to Ron Atkine and the reservation slip on the table of a Paris restaurant was made out to Mr Hatchkin. The ones awarding me the “Atkins” plural are so numerous as to be not worth preserving.

I am known as Ron to my mates, Ronald to my wife and to God and my diminishing readership, and Ronnie to a very few chosen acquaintances. I am certainly not that famous football manager Ron Atkinson, though I have been asked for an autograph or two in Europe – and eventually supplied it so as not to disappoint.

And finally…I am, sadly, neither Scottish nor related to the Aitken family which once made Express Newspapers great.

This was an error I had to point out to my employers at The Observer when in March 1984 I became the SJA’s Sports Journalist of the Year. That great publication, run in the main by a tight bunch of Oxbridge chums in those days, announced the award in one paragraph and called me Ronald Aitken.

Postscript: A piece that appeared in the Mail & Guardian last week identified me (not the first time) as…Tim Atkins. This was the same mistake that The Observer, a paper in which I had appeared for 16 years, made in 2009 when I won the Louis Roederer Wine Columnist of the Year Award.