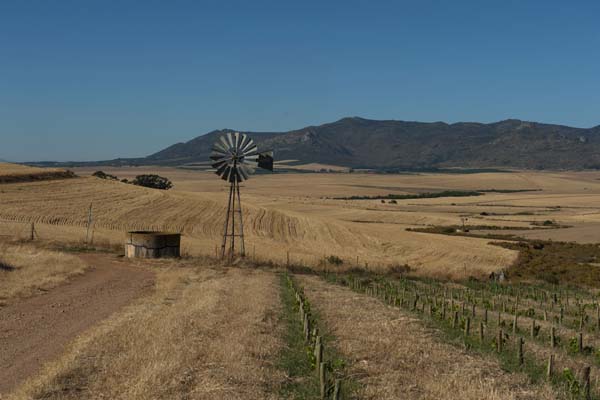 Every revolution needs a spark, a catalyst that changes things forever. It might not compare with the storming of the Bastille or the fall of the Berlin Wall, but the Sauvignon Blanc that Charles Back of Fairview tasted at a co-operative in 1995 has had a dramatic impact on the Cape Wine industry. That glass of wine was a moment of sublime serendipity. Without it, the Swartland would still be regarded as a rural backwater, better known for wheat fields than vineyards. Instead, it is one of the most dynamic regions in the southern hemisphere.

Back wasn’t looking to overturn the natural order; he was just searching for a source of cheap grapes for his Goats do Roam brand. But the Sauvignon Blanc he tasted at the Swartland Winery that morning inspired him. “I couldn’t believe that anyone could make Sauvignon Blanc that good in such heat,” he remembers, “so I asked where the vineyard was.” Back climbed into his car and drove to Klein Amoskuil near Malmesbury; by the end of the day, he owned the farm. He replanted the vineyards – with the exception of that inspirational patch of Sauvignon – and employed a young winemaker who was to become one of the key figures in the Swartland’s renaissance.

Spice Route, as Back’s new project was called, made its first wines in 1998, with Eben Sadie in the cellar. “The Swartland co-operative had been making great wines for years,” adds Back, “but there were no private cellars in the area. We were the first company to invest there.” This isn’t strictly true – Allesverloren and Lammershoek were both founded in the 18th century – but the arrival of Back and Sadie was crucial. A co-operative dominated region that specialised in high-octane reds, off-dry whites and base wine for brandy had been given an economic shot in the arm.

The fact that Back has one of the sharpest marketing brains in the Cape winelands didn’t hurt either. Looking at the hot dry conditions that are a feature of the region, he decided to plant varieties that would work in the conditions: Grenache, Syrah, Mourvèdre, Carignan, Tannat, Barbera, Viognier, Souzão and Durif. If the Swartland was a Mediterranean climate, why not use Mediterranean and Rhône Valley grapes to make the most of it?

Eben Sadie made three vintages at Spice Route before setting out on his own in 2001, with 14 barrels and R9000 to his name. “Within a vintage, it was obvious that this guy was destined for great things,” says Back, who was gracious enough to allow Sadie to make his own wine at Spice Route for two years. The result was Columella, a Syrah-based blend that is now established as one of the half dozen best reds in South Africa, followed in 2002 by Palladius, a white Cape-meets- Rhône-and-Burgundy style blend that set a new benchmark for the country.

Sadie, like Back, is an inspirational character who has attracted interest and followers in equal measure. His well-deserved success with Rhône varieties proved that the Swartland could produce high quality, as well as quantity. Sadie’s approach – born of necessity to a degree, since he could not afford to buy land – was to source grapes from local growers. This large region has a lot of old vines, the best of them on slopes where nothing else would grow. “Machines can’t move on mountains and you can’t farm wheat there,” he says. 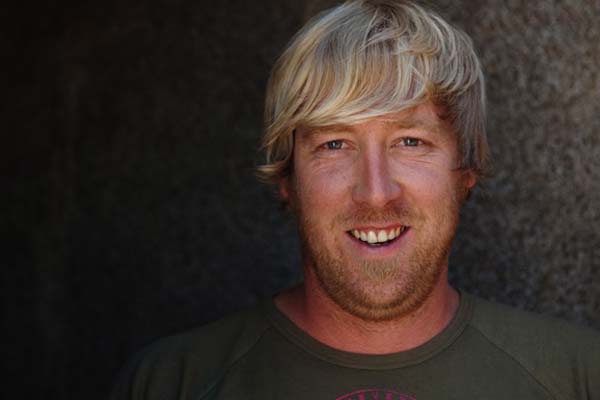 You can see the appeal of the Swartland to young winemakers with ambition. Land is cheap, especially when compared with much swankier Stellenbosch, Elgin and Walker Bay, grapes are plentiful (if notalways of the best quality) and there’s a sense of camaraderie, of shared endeavour, that is infectious. That’s what has attracted such an array of talent to the area, including Chris and Andrea Mullineux of Mullineux Family Wines (2007), Adi Badenhorst of AA Badenhorst (2007), Craig Hawkins of Testalonga and Lammershoek (2009), Callie Louw of Porseleinberg (2009), Donovan Rall of Rall Wines (2008) and David Sadie of David (2010).

All of these winemakers are part of something called the Swartland Independent Producers (SIP), an association that runs the Swartland Revolution celebration every November and has established a certification programme for its 21 members’ wines. To qualify, they have to be “naturally produced” (without added yeast, acidity, tannin or reverse osmosis) and must be aged in no more than 25% new oak of European (i.e. French) origin.

The list of recommended varieties is more controversial, since it excludes Cabernet Sauvignon, Merlot Chardonnay and Sauvignon Blanc, four of the most planted grapes in the Swartland. Any SIP wine must be made from a minimum of 90% of Carignan, Cinsault, Grenache, Mourvèdre, Pinotage, Syrah and Tinta Barocca (for the reds) and Chenin Blanc, Clairette Blanc, Grenache Blanc, Groendruif, Marsanne, Muscat d’Alexandrie, Muscat de Frontignan, Roussanne, Vallblaar and Viognier (for the whites). Andrea Mullineux explains: “In the quest for rationality, we feel that certain varieties have adapted to and express the Swartland conditions best. Although one could make an okay Sauvignon in the Swartland, it is just too warm/dry to make a great one. Varieties not on the Swartland Independent list can still make up 10% of a wine, though.”

Like the majority of its grapes, the Swartland looks southern European as much as African. Gaze out over its landscape, fringed by mountains and baked brown, yellow and gold by the summer sun, and you could be in Castilla-La Mancha. This is a place of far horizons and unpolluted, vaulting skies. Close your eyes for a second and you can imagine Don Quixote tilting vaingloriously at a windmill in the distance, pursued by a breathless Sancho Panza.

For critics of the Swartland, there is something quixotic about the so-called revolution. Some argue that it’s too expensive to produce grapes here because of low rainfall, un-irrigated vines and paltry yields. “It’s 5°C hotter than Paarl,” says Niël Groenewald of Bellingham, “and I’m not convinced that it’s sustainable in the long term for the growers. You need 1,000 Eben Sadies to make the whole thing prosper and there’s only one. The Swartland works if you are small scale, otherwise the numbers don’t add up.”

Marc Kent of Boekenhoutskloof, who sources the grapes for his best-selling Porcupine Ridge Syrah from here and is one of the partners in the ambitious Porseleinberg vineyard south-west of the town of Riebeek Kasteel, disagrees. “The Swartland needs more brands,” he says, “but you can make a profit. It all depends on your business model. And if it doesn’t work out, people can always plant wheat again.”

The future of the Swartland will depend on the region’s ability to make wine pay, with economies of scale at one end and high, sustainable prices at the other. In the meantime, the revolution continues: no stormed barricades, no tub-thumping oratory, just some increasingly impressive wines.

AA Badenhorst.
After a successful spell as winemaker at Rustenberg in Stellenbosch, the wise-cracking Adi Badenhorst took over a disused winery and an old, bush vine vineyard on the Perdeberg in 2008. In the space of five years, he has become one of the key figures in the Swartland Revolution. He favours wines with lower alcohol levels, old oak, minerality and minimal intervention. The top wines are a blended red and white, but look out for the cheaper Secateurs and Duiker ranges produced from purchased fruit and, if you’re feeling brave, the salty, non-vintage Funky White, made, Sherry style, in a solera system, but without fortification.

Craig Hawkins (Lammershoek and Testalonga)
Craig Hawkins isn’t interested in making conventional wines from his father in law’s vineyards at Lammershoek. His arrival in 2009 has resulted in some highly individual wines, mostly made in a natural “naked” style with minimal sulphur. The Chenin is the most successful of the releases, but the Cellar Foot Mourvèdre is interesting, too. Even funkier are the wines Hawkins bottles under his own label, Testalonga, where skin contact and no sulphur additions are the order of the day.

Hawkins occupies the wilder fringe of South African winemaking, but he’s a talented, even daring winemaker who enjoys testing boundaries.

Mullineux
Chris and Andrea Mullineux made the wines at TMV (now Fable) in Tulbagh until 2007, but took over some of the winery’s contracts in 2008 when they set up their own cellar in Riebeek-Kasteel. Quality is uniformly impressive and has rapidly established the brand as a Cape first growth, particularly for its soil specific Sryahs, Schist and Granite. The entry point Kloof Street level wines are good, but the real excitement is at the top end: a blended white, a Clairette Blanc, a Roussanne and three very fine, perfumed Syrahs that wouldn’t look out of place In Hermitage or Côte Rôtie.

Porseleinberg
The first two vintages of Eben Sadie’s icon red, Columella, were made with grapes sourced from this vineyard, which was acquired and expanded by Boekenhoutskloof in 2009, with the talented Callie Louw as winemaker. The site is one of the most spectacular in the region, with plantings on very rocky, shale soils. Most of the grapes will find their way into Boekenhoutskloof’s brands, but the best will be used for Porseleinberg itself. The maiden release, a 2010 Syrah, is made from organically-cultivated vines planted in 1999 on the eponymous Porcelain Mountain and is quite brilliant: a Cape Cornas, if you like.

Sadie Family
The passionate, ever-improving Eben Sadie has eschewed international travel in favour of spending more time in Malmesbury these days, arguing that it’s hard to “plough your vineyards from Tokyo”. As well as Columella, Palladius and the cheaper, co-owned Sequillo range, he is now bottling an increasingly large, terroir-focused line up of wines made from old vines grown all over the Cape. All eight of the current releases are excellent, but from the Swartland, look out for Pofadder (a Cinsault), Treisnpoor (a Tinta Barocca) and T’Voetpad (a white blend). Tokyo’s loss is South Africa’s gain.

Charles Back sometimes gets more credit as a visionary and marketer than he does as a winemaker, but the wines that he and Charl du Plessis make under the Spice Route label can be some of the most enjoyable in the region. The Sauvignon Blanc that launched the modern Swartland Revolution is still being made, albeit for a Marks & Spencer own label these days, but the top wines are the partially barrel-fermented Chenin Blanc, the Pinotage and Chakalaka, a rich, flavoursome red blend that combines six different grapes in a delicious cuvée. 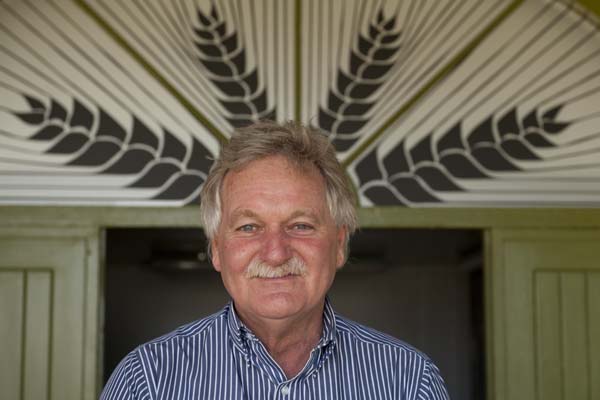 2011 Porcupine Ride Syrah 2011 (£9.50, Berry Brothers) Consistently one of the Cape’s best sub-£10 reds, this is a perfumed, ginger-scented Syrah with voluptuous tannin and juicy, blackberry and bramble fruit. 88 points Drink: 2013-16

SWARTLAND AT A GLANCE

Climate: Mostly hot, Mediterranean, but altitude has a moderating influence as does proximity to the Atlantic in the western part of the region